You know, the outside cats make going outside quite entertaining!  Check out Beep Beep! 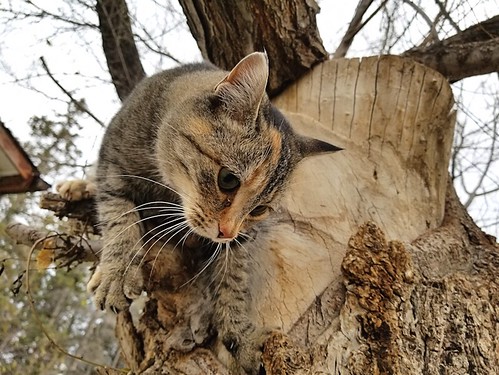 Earlier, when I was walking around the yard, she followed me, insisting on attention, until I finally picked her up and carried her the rest of the way.

Later, as I brought the van into the yard, cats and kits scattered all over the place.  Beep Beep went up the tree.  When I came near, she started rolling around so much, she almost fell off!

I’m happy to say that, while Beep Beep is still just a wisp of a cat, she has filled out over the past year.  A reliable source of food seems to have made quite a difference!

We hit a milestone, on the way to my husband’s medical appointment.  He was kind enough to take a video of it, while I drove (and it turns out I have nothing on my computer that will allow me to rotate it.  Sorry for making you crank your neck! 😀 )

For all the problems we’ve had with it, the one thing that has proven itself reliable is the engine itself.   We’ve owned it for about a year and a half and have done some major work on it, but the engine itself is just purring along.

As for the appointment…

It was just under an hour to drive to the clinic for the appointment.  Since it was the first time my husband has gone there, he had a form to fill out.  When it came to listing the medications he’s currently on, after the 8 spaces available were filled, it had to be continued on the back of the page.  😦

When he was finally shown to the examination room, it was about 40-45 minutes after the appointment was scheduled for.  The doctor is a surgeon, and we had no idea why we were sent to this clinic.  Just that it had to do with the test results of some samples from my husband.  Which meant it had to be something bad, right?  As we were talking, I asked if he was worried, but he said no.   There’s really not much that would be more than he’s already dealing with.  He’s got to the point where he just rolls with the punches, and keeps on going.  What else can you do?

As my late father would say, when people asked how he was doing, “Oh, can’t complain.  It wouldn’t do any good, anyway.”

The doctor came in, spent some time going through the file, then told us that one of 3 samples showed blood.  It’s probably nothing, but they have to book him for a colonoscopy.  We got a printout of what needs to be done in the days beforehand, and we will get a phone call to book an appointment, soon.

The whole thing was over in less than 5 minutes.

This couldn’t have been done locally?  Or over the phone?  Really?

So… I guess we just wait for a call, now.

One thought on “Vehicular Milestone”