Sometimes, the cats seem perplexed by the bird bath having ice instead of water. 😀

This past Sunday, the weather was mild enough that I was able to spend some time on the beach.

It was really fascinating.

The sand was frozen solid, but you could see the effects of water and ice. One dramatic visual was at the outflow for storm drains.

At the time I was there, the tide was still going out. There was ample evidence of how high it had gotten.

END_OF_DOCUMENT_TOKEN_TO_BE_REPLACED

I swung by the beach this morning, after dropping my daughter off at work. The last time I was there, the water was free of ice.

It isn’t, anymore. It’s harder to tell in the photo above, but there is ice covering the water in the distance.

The lake narrows a bit in this area; enough that we can just see the far side (visible in the top and bottom photos). It extends a considerable distance to the north, and the ice is being blown south.

It was moving so fast, I could see the ice coming closer to the beach, even in the short time I was there. You can even see how much closer it came between this photo, and the one at the top, which were taken less than a minute apart.

For a lake as large as this one, it will take a long time for the ice to clear on all of it.

It’s been a chilly few days, with even a bit of snow during the night. Nothing like what they got in other parts of the country, that’s for sure! I actually wouldn’t mind more snow right now. Or rain. Instead, as of yesterday, we are now under a burn ban. It’s just too dry out there.

I had a bit of company while doing my rounds today. Just Rolando Moon this morning.

It’s funny that such an ornery cat acts so affectionate at times. She’s gotten better at letting me pick her up, but not for long. She either jumps down after a few moments, or starts biting at my fingers. Not full-on bites. Just enough to feel it. Then she jumps down. 😀

END_OF_DOCUMENT_TOKEN_TO_BE_REPLACED

The formation of icicles outside our bathroom window was noted recently.

Since that window looks into the sun room, not outdoors, this is something that should not be happening.

My first thought was condensation, but after thinking about it for a bit, I realized that didn’t make sense.

So when I went out to do the cat stuff this morning, I remembered to check out the window from the other side.

END_OF_DOCUMENT_TOKEN_TO_BE_REPLACED

Welcome to a new year! May 2019 be a wonderful year for you, and I hope everyone stayed nice and warm while celebrating last night.

It was certainly a bitter one last night, as some cities in Canada had their fireworks several hours early, so people could go home, out of the cold. At the time of this writing, we are at -26C, with a windchill of -37C.

The last few days, when going out in the morning to give the cats fresh food and warm water, I have been finding the water bowl in the sun room empty (except for a cat sitting in it, usually). Last night, the girls went out an extra time to make sure there was water for them.

This is what I found this morning.

END_OF_DOCUMENT_TOKEN_TO_BE_REPLACED

So, a little while ago, while at my computer, I heard a strange thump outside.

I thought the cats might have knocked something over, but when I looked into the sun room, all the kittens were on the bench, sitting up, and looking in the same direction the sound came from.

Then I saw it.

The rain barrel had fallen over.

Now, I’d emptied the rain barrel, but then we got a whole bunch of rain, immediately followed by freezing temperatures, so when the barrel froze over, I just left it.  I couldn’t break through the ice, and it was too heavy to push over.

I found it fallen over into the garden, and managed to roll it to one side, so it wasn’t blocking the path in. 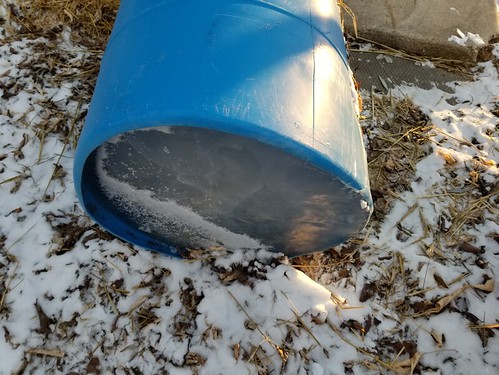 So why did it fall?

Check out the base. 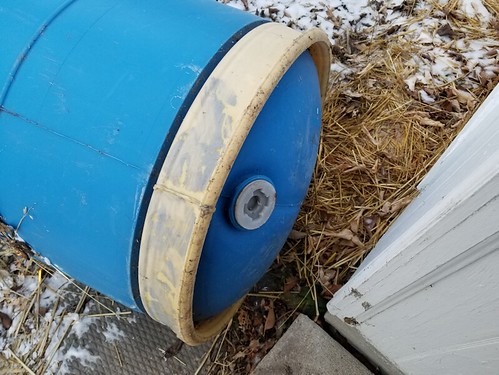 As the water began freezing, deeper in the barrel, the ice prevented it from expanding out, or sideways.  So it expanded the only direction it could.  Down.

That base used to be level, with only about an inch or two of the blue plastic encased in the yellow ring.