Just before I headed out to my mother’s to help her with some cooking, my husband starts laughing out loud in the living room, calling us over.

If you’ve seen his previous post, you know why!

I managed to get some photos on the DSLR, too.

What a handsome boy he is!

While he was going around the platform feeder, birds would start flying over, see him and abruptly change directions.  It looked like they were dive bombing him!

He so wanted to get onto the hanging feeder, but it kept moving! 😀

I don’t know what he found to nibble on up there.  We saw him chewing on things a few times.

I probably don’t want to know what he was eating.

He also was standing on his back legs, trying to climb even higher, but I wasn’t able to get photos.

While Corvo was busily entertaining us, Doom Guy and The Outsider also came over and hung out at the bottom of the planter.  We couldn’t get pictures at the time, but my older daughter caught this one. 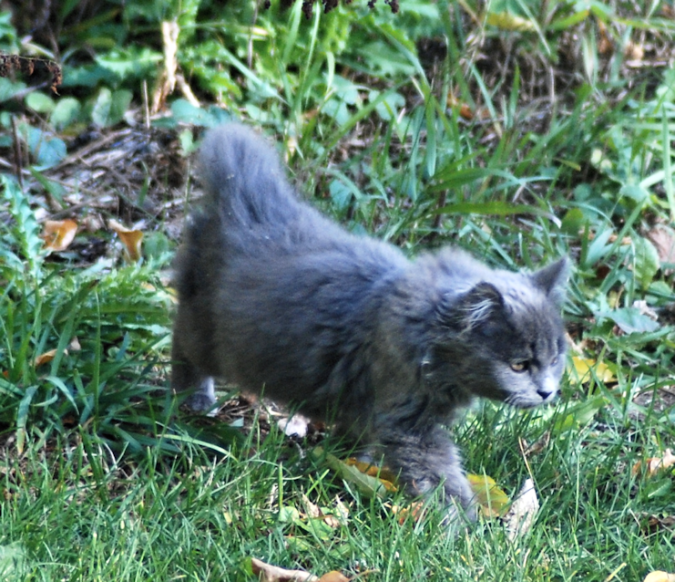 He’s here all the time, now, and seems to have made himself at home.

My daughter also got a photo, a few days ago, of one of the mystery cats that sometimes shows up.

This is one of two strange adult cats that have been showing up now and then.

Beyond getting entertained by cats at home, I spent some time with my mother, doing some cooking that will be used by home care when they come by for meal assist later on.  I noticed that another jar of the chili we made for her finally got used.  She told me I should take it home, because it wasn’t “fresh”, and she needs to only eat “fresh” food, for her health.

Well, she eats plenty of stuff that isn’t “fresh” all the time, so I know that’s just something she came up with to excuse not eating the chili.  I explained again to her that the reason I put them up in jars the way I did, was so that it last longer.  It didn’t matter.  Like the chicken my sister-in-law made for her, that ended up going to the cats, she’s simply decided it has gone bad, and that’s that.

So much of the fresh food that was prepared for her ended up being thrown out, because she wouldn’t eat it for some reason, and it actually did go bad.  Such a waste.

I had a chance to show my mother some photos of the clean up I did along the fence line up to the gate, because of a concern she brought up when she phoned to ask me to come over.  It seems “people” have been telling her that I was not just cutting down dead branches, but taking down living trees.  Now, I’ve been keeping my mother in the loop about what I’m doing, including clearing trees from the fence line, because we will need access to it to repair it.  Then she started talking about her lilacs.  She had planted special lilacs by the gate.  I told her on the phone that they’re still there, I just cleaned out the dead stuff and the poplars that were growing in the middle of them.  She seemed taken aback when I mentioned poplars, but she was really upset that I had apparently cut down her special lilacs.  I assured her I hadn’t, then asked who it was that was gossiping about us that she was listening to.  I found out, and was not at all surprised it was the person that is the reason we have to lock our gates.  *sigh*  Ah, well.

So I showed her a picture of the area by the gate I had cleaned up.  Including this one.

I don’t know what kind of lilacs those are (I wasn’t sure they were even lilacs; she has the usual purple lilacs on the other side of the gate).

It turns out, this wasn’t the gate she was talking about.  She thought I had cut down her white lilacs. 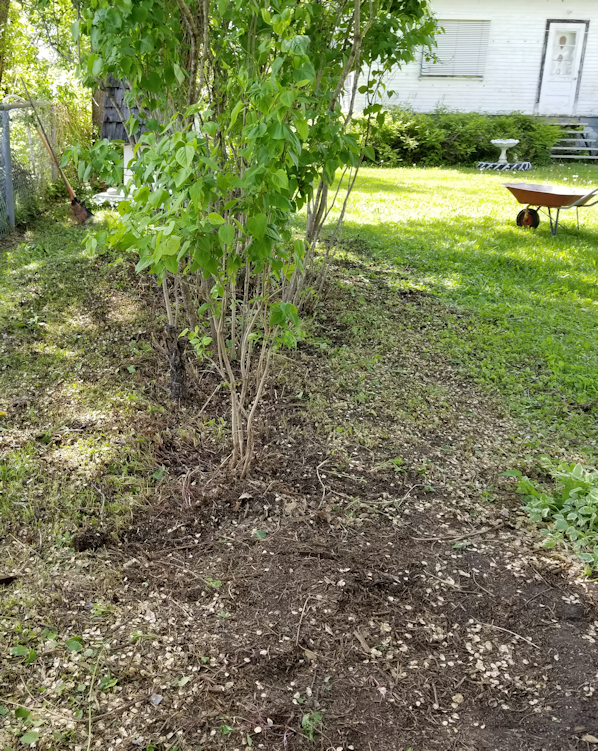 We cleaned up this area, months ago.

She has seen this area since I’ve cleaned it up, so she knew what I had done with it.  But when she was told I was cutting by the “gate”, she thought of the gate into the yard, not the gate at the driveway.

I’ve made a point of keeping my mother in the loop of what we’ve been doing, showing her photos every chance I get, until she is strong enough to come and see for herself.  Yet, all it takes is one person, who has no clue what we’ve done or what we are doing, to start gossiping, and she starts to panic.

She saw the pictures, however, and I talked about the repairs to the fences that are needed, and the section with posts that will need to be replaces, and so on.  She was happy with what she saw.  It worked out well in the end. 🙂

So one are the things that I’ve noticed lately is that as the temperatures cool the birds seem more and more dependent on assistance for feeding. Now the good news is that the feed we use for deer is essentially widely varied bird seeds. It saves us a bit of money since we can simply buy deer feed and feed both.

So going out to feed them today I assumed that they would come back once I left, as usual… Apparently, I wasn’t the only one who thought this.

Here are some photos from yesterday to entertain you. 🙂

As my younger daughter and I were getting ready to head into town to pick up the rest of a prescription refill, we got accosted.  Doom Guy came right over for attention, but when I picked him up, he didn’t want to be held in my arms.  He wanted to perch!

Then my daughter came out, and Beep Beep was just all over her!

She was rolling all over her shoulder, and pushing herself against my daughter’s head.

Then kept on twisting and turning.  Until she fell off and landed on my daughter’s purse before we finally got her off so we could leave!

While in town, we remembered to swing by a liquor store.  We spotted a beer bread mix which, of course, requires beer.  The company that made the bread mix is also a small brewery, and I even found the exact brand.

I got two cans.  One for baking, one for tasting! 😀

We shall see how it turns out!

I replaced the old Christmas lights on the fence with the new indoor/outdoor LED lights yesterday, and left them on.

Then I waited until full dark before checking on them. 🙂

At first, I didn’t think I’d be able to get any photos, then remembered that I have a “pro” setting on my phone that allows me to adjust ISO and aperture settings.  Well.  The virtual ones, anyhow.  These are the two extremes of what I got, after playing around with the settings.

The strings of lights are slightly longer than the old ones, and they have at least double the number of bulbs.

My brother tells me the lights used to have a timer in the garage.  I know I saw one, but couldn’t find it.  We do have at least one in the house, and I even know where it is, so I will set that up later. 🙂

I’m rather happy with them.  According to the box, up to 20 strings can be added together, without causing problems.  I certainly have no plans to do that, but they are inexpensive enough that I might pick up a couple more to extend away from the gate.  As I eventually clean up the fence line in the other direction, it would be nice to have them strung all the way to the corner. 🙂

Do you remember back when you were a teenager you and your friends would go out and innocently look for trouble? Yeah, this is exactly what they’re doing. They’re taking turns batting at a moth and I swear at least one of them is acting as Lookout…

Thanks to my husband’s efforts, the kittens are getting quite at home in the sun room.

Especially these three, in a photo my younger daughter took, yesterday.

… Absolutely Shameless. And I have to admit I feel absolutely no guilt in luring the kittens into the sunroom with treats.

So the weather is turning a little cooler, and the kittens are getting big. I’ve been getting out almost daily to both feed them as well as interact with them to try and get them as social as possible.

I am happy to say that even the most skittish in the bunch is now comfortable enough to come within a few feet of me when I’m feeding them, and even take care of their own activities while I’m around.

One of them is so socialized that he readily accepts being picked up being petted and tried to follow me into the house the other day. Personally, I see absolutely nothing wrong with that.

How the day was going to go was a bit up in the air, to be decided after we picked up our van.  It ended up being a much longer day, but we got the bulk of our monthly shop in, after all.

In order to get the van home, my younger daughter and husband had to come along.  Now, my mother’s car isn’t a compact car, by any means, but my husband tops 6 ft.  Even with the seat back as far as it could go, he had to fold himself in.  He was basically wearing the car!!  END_OF_DOCUMENT_TOKEN_TO_BE_REPLACED