Things warmed up a bit today, and we got a bit of snow. It won’t last long; tomorrow, the temperatures are supposed to dip again.

After some consideration of what materials I had available, today I finally built an insulated shelter for the outside cats, as an extra layer of protection in the sun room, for when things start to get really cold.

END_OF_DOCUMENT_TOKEN_TO_BE_REPLACED

Our first winter here, there were a few problems we noticed. Problems that were definitely adding to our electricity bill for heating!

This was taken just before our first Christmas here.

END_OF_DOCUMENT_TOKEN_TO_BE_REPLACED

It turned out to be a rather pleasant day today, if quite windy. I wanted to cover my late father’s old car while it was still nice out, though.

We’d found a huge old tarp in the barn that we used to cover the mulched area of the big garden for the summer. It was more than big enough to cover my dad’s car, so when we took it off the garden, we just set it aside in the yard until we could get that done. When the winds picked up and threatened to blow it away, I shoved it through the back door of the garage, which leads to where my mom’s car is parked.

It’s so big, it filled up the space! I ended up having to fight through it when I needed to get through to the doorway to where our van is parked. 😀

END_OF_DOCUMENT_TOKEN_TO_BE_REPLACED

It was a pleasant evening tonight, and I decided to take a walk around the yard, to enjoy the longer daylight.

I go distracted and ended up clearing and trellising the grape vine. Well. A temporary trellis, as least.

I also made a discovery.

END_OF_DOCUMENT_TOKEN_TO_BE_REPLACED

Okay, so this is where we left off last night. 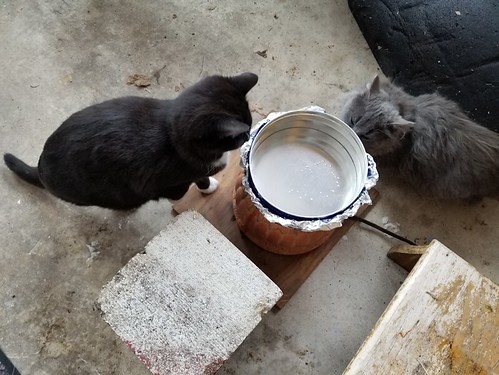 When I checked on it last night, however, I found that the aluminum foil did not prevent water from dripping down.  After looking around for something that might work, I decided to commandeer one of the containers we have been using for the cat kibble.  A heavy bottomed frying pan that the handle had broken off, long ago.

Some time during the night, however, it got knocked over.  We could see the light glowing through the drainage holes in the terracotta pot through the bathroom window.  When I went out to do their food and water in the morning, I found a small ice patch where the water had spilled.

I am guessing that, when it got to hardly any water left, the cats knocked it over while trying to reach it.

I decided to go with the concrete block. 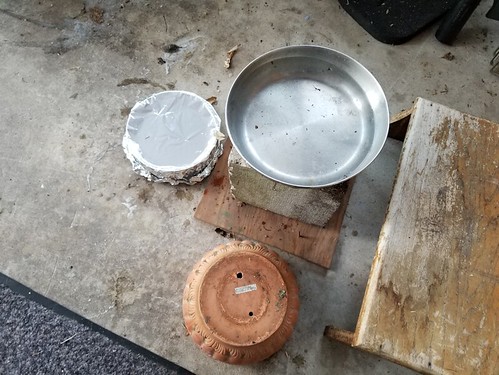 I am hoping the weight of the block will make up for it resting on the edges of the light fixture.  It seemed high, though, so I moved it closer to the kneeler, and put the pot and tin upside down near it, so the cats could sit on them, if the wished. 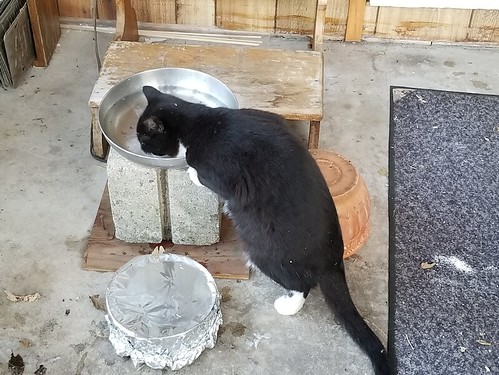 Which promptly got ignored. 😀

At least with the block, though, he can put his paws on the corners to stabilize himself.

When we checked it again, hours later, it had been knocked off again, but it was also completely dry.  There was no new ice. Again, it seems that they knocked it over only when the water was almost gone.

So I’ve put it back, and filled it with more water than I had before.

As for the heat; it is clearly working, in that the water is kept from freezing, but neither the pot nor the block seemed to warm up at all on the sides.  There is no radiant heat coming off.  The heat of the bulb is enough to keep the water from freezing directly above, but not enough to fight off the cold on the sides.  I had hoped it would provide at least a little bit of warmth that way, but it I’d probably have to go up to a 100 watt bulb to accomplish that, at which point I think it would be too hot at the base of the pan.  That cats, at least, know how to use their own body heat to keep them warm! 🙂

The following is a “use watcha got” recipe to use up the carcasses of your cooked chicken (or turkey).  This stock is cooked down to be more concentrated, and should result in a rather firm, gel-like consistency when cool.

Decide ahead of time how you will store your stock, and prepare in advance as needed.  I used pint sized canning jars and sterilized the canning funnel, jars, lids and rings during the last hour or so of cooking.  You could also pour the stock into ice cube trays for freezing, or use freezer bags.

You will also need a colander and bowl large enough to hold your stock, plus a sieve and cheesecloth for straining.  Having a giant measuring cup is also very handy to stain into, making it easier to pour the stock into jars. 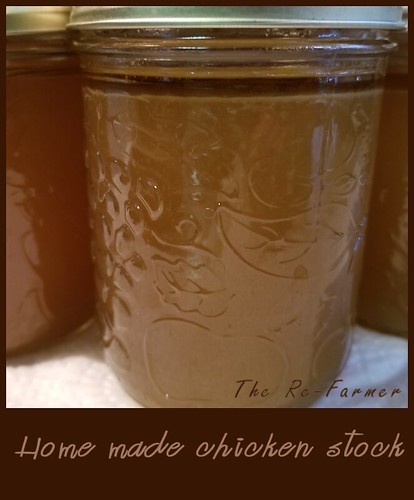 Note: Quantities will depend on how many carcasses you are using.   For 3 carcasses, I used 1 large onion, a whole head of garlic, 4 carrots, and whatever herbs I had handy in my cupboard.

Seasonings will also depend on how the chickens were seasoned when cooked.  When I roasted ours, I first rubbed them with lemon juice and put the lemon pieces, with some bay leaves, into the cavities.  I also rubbed lemon salt, paprika, pepper and oil into the skin.  Because of this, I was able to be light on the salt and pepper when making the stock.  What salt I did use was lemon salt.

Using the carcasses of 3 chickens, I was able to fill 11 pint sized canning jars (all the ones I had available), plus have 3 cups of stock left over.

The second cooking down of the stock concentrates it a bit; if you wanted to, you could continue to cook it down more, for an even more concentrated stock.  Keep this in mind when you use it, as you may need to water it down a bit.

For the last while, we’ve had a sulfur (like rotten eggs) smell coming from our hot water.

One is the rod in the tank needs changing.  Since our tank is less than a year old, we know that’s not the cause.

The way to treat the smell from hydrogen sulfide is hydrogen peroxide.  This is a septic friendly treatment, too.

Getting the hydrogen peroxide into the hot water tank is the issue.

I found some instructions and videos online.  The basic way to do it is;

First, shut the water off to the hot water tank.

Next, drain some of the water out.

Then, open up into the tank at the cold water pipe (where that is in the system depends on the tank, it seems) and pour in about 1 cup of hydrogen peroxide per gallon.  So for our 40 gallon tank, it would need about 4 cups of hydrogen peroxide.  After that, the tank is closed up, the water turned back on, and it’s left to sit for about 3-4 hours to kill off the bacteria.  The peroxide breaks down over that time, so by the time it’s used, there is no longer any hydrogen peroxide left.

I don’t like the idea of opening the tank.

In reading some comments under one of the sites I found, a different way to get it in was suggested.

When draining the tank, the water will automatically stop flowing after a while, because a vacuum forms.  What was suggested was to tape a hose to a faucet, then put the other end into a container with the hydrogen peroxide.  The hot water tap is turned on, and the vacuum suctions the peroxide from the container into the hot water tank.

So that’s what I tried.

This is a sink in the basement, which we never use.  It doesn’t even have drain pipes; just a bucket under the sink.

Locally, we could only find small bottles of peroxide containing just under a cup, so we got 4 of them, which I emptied into one container.  The hose is from an old set up we had for our aquarium that I used to get water from our sink to a 5 gallon bucket.  It fits into the tap.  I tested it after Gorilla Taping the hose in place and were are no leaks.

As you can see in the picture it did work.

However, there just wasn’t enough of a vacuum to take up more than about 1 1/2 bottles of peroxide.

That’s likely not enough to get rid of the bacteria, but I really don’t want to open up the tank if I can avoid it.  It’ll just mean some air gets in the tank, which will come out when we run the taps later.

I just don’t want to mess with our new tank!

Update: Well, several hours later, and the smell is gone!  It looks like it was enough peroxide.  Maybe we caught it early enough, before it got too bad, since we haven’t had the smell for very long.  Here’s hoping it stays away! 😀