Okay, so let’s end the day with things that don’t involve messy mystery clean up jobs!

Nothing like our critters to make me smile again. 🙂

All of them seemed unusually active today.  Maybe spring is in the air?

While walking away from the door to feed the cats, several of the usual friendlier ones already in the area, I caught sight of the Mothman out by the other house, running away hard, in great leaps and bounds though the snow!  I don’t think I’ve ever seen the Mothman move at anything faster than a barely quick walk before! 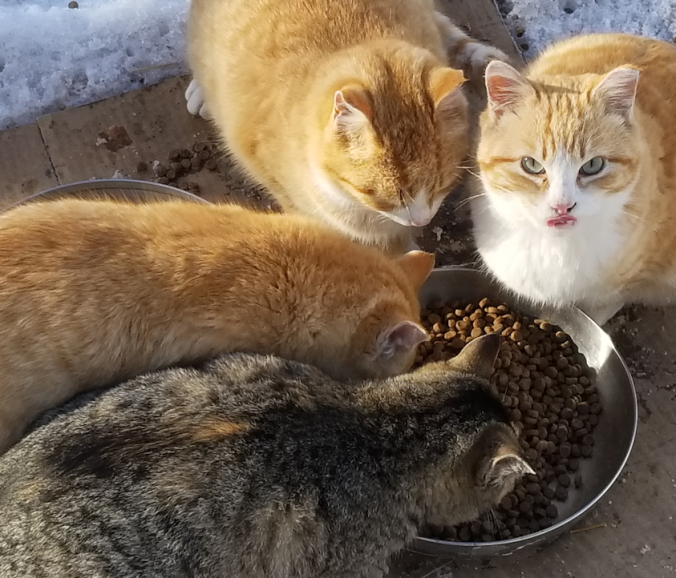 At best, a few of these guys let me pet their backs while they ate, and they didn’t seem to like it that much.  Squishum wouldn’t even allow that.  Even Rolando Moon, who came in later and will usually come right up to me, stayed away.  Only Butterscotch let me touch her, though she was moving around too much to properly pet her.  As I walked out of the yard to go read the electricity meter, she kept running ahead of me a few steps, stopping, running ahead a few more steps, then stopping again.  There was something odd about how she was moving, as if she didn’t like her paws touching the ground.  Then she would stop and chew on the bottom of a paw.  I think she might have had ice and/or snow stuck to her paws or something.  The only other time I’ve seen a cat walk like that was when it accidentally stepped on a piece of tape, and it got stuck. 😀 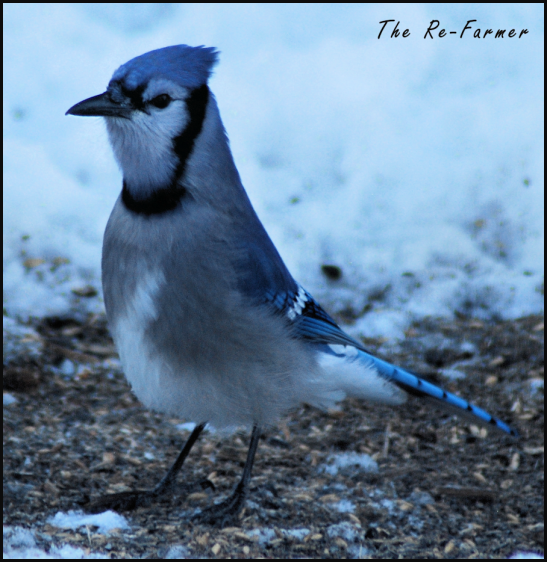 Even the blue jays were so active, I could hardly get a photo of them.

Then the deer showed up.

Barbecue came first, then Mama and one of the twins, which was very unusual.  The other twin made its way through the spruce grove, instead.  Then they chased Barbecue away from where he was eating.  Hungry Girl made her way in through the trees, too.  Then, for the next while, they kept chasing each other off.  Mama and the twins took over the feeding station for a while, as Hungry Girl and Barbecue hung out in the spruce grove.  Eventually, they would make their way over, and more chasing would happen.  Not the usual short little chases, either, but big leaping chases, out into the garden.

It’s always something else to see a deer at full speed.  They can really move!!

With all that, I did get quite a few pictures.  This one has got to be my favourite! 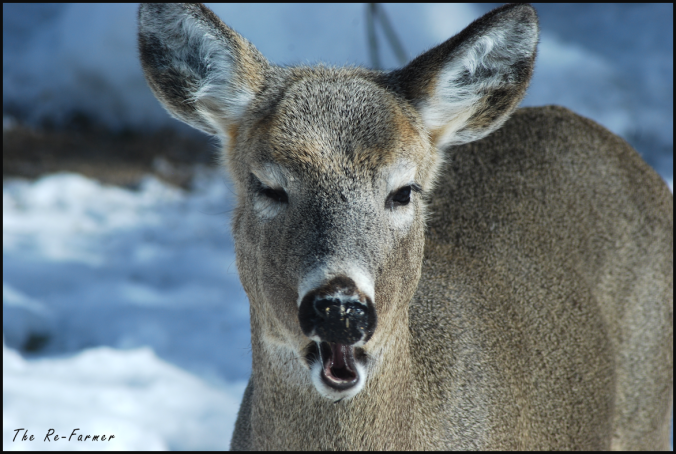 What a sassy Mama!

Who know deer could wink? 😀

I also love this one of Hungry Girl.

Meanwhile, the squirrel is just sitting there, watching all the crazy stuff going on.

In between all this, I made my trip to the post office and got my marriage certificate (yay!) so after lunch, my younger daughter and I went into town to FINALLY get my driver’s license transferred over, as well as mail off the forms to finally get our health care cards for this province.

She did a whole bunch of form filling, taking extra care to make sure all the names and dates were right, I got my photo taken, then she got on the phone to get an override of my old license done.

They put her on hold.

That done, she started to input the new information, but had to start over part of it, which meant I had to get my picture taken again.

I feel for the staff that needs to do all this.

Finally, everything was filled out.  My old driver’s license was photocopied, then she blacked out the bar codes.  I got the photocopies along with my original paperwork, after those got copied, too.  I paid for it, which turned out to be $50 ($20 for the license, $30 for a fee!). After that I had to sign something like 5 different forms.  Then, miracle of miracles, I got to sign my new temporary driver’s license!  My permanent one should arrive in the mail within a few weeks.

Then next time I’m back there, it will be after our van is saftied, and I can transfer the insurance and registration.  Which hopefully will be ready to do before the end of this month, so I don’t have to pay cancellation fees.

I’m just to glad it’s all finished now!  The rest of the family still needs to do their IDs, but I’m the primary driver, so it was more of a priority.

What an ordeal!  So glad it’s over!

Yes, I finally have it!

It had better finally be enough for me to switch my ID around!  Because the “certificate” part itself doesn’t have my married name on it.

That’s on my address at the top of the letter.

Which has only my box number, not my physical address, so that had better be okay, too!

The certificate itself is just a larger version of the wallet size I had seen an image of on their website.  Otherwise, it’s exactly the same. It even says “certificate of marriage” not “certificate of registration”, which is what was part of the concern when the woman at Vital Statistics called me back to make sure I was getting the right version.  I’m guessing that because this size is part of an 8.5×11 letter with my married name and address on the top third, it will satisfy the powers that be when it comes to changing my driver’s license.

I’ve also made a copy to include with the paperwork we need to return, along with a clean image of my husband’s half-destroyed birth certificate.

Just waiting on my daughter to have lunch, then we’re on our way!

I really, really hope this will be the last of this ID mess!

My telephone tag with Vital Statistics is over.

We finally connected again, today.  It was the same woman I spoke to earlier, and she was so apologetic, because she’d told me my application would be processed after our last talk, where she thought she had asked all the questions she needed.

It then got sent to someone else for the final processing, and that person asked her…

Did I want a marriage certificate, or marriage registration card.

Now, the form gave two choice.  The large size suitable for framing, or the small card, like our birth certificates.  I’d checked off the small card.

It turns out, that’s just a registration card which, as I noticed in the image on the website, has only the pre-marriage names, not post marriage names.

The certificate (which would be the larger, framing size) would have our names before and after the marriage on them.

Which is what I need.

It’s a good thing I’d told her why I was needing the certificate, and the problem with my birth certificate name not matching any of my current ID.

For all the hassle this is, the folks at Vital Statistics are awesome.

This being Monday, I might get my marriage certificate by the end of the week.  Then, finally, I’ll be able to change my driver’s license and get my health care card!

Next thing on the list; get the van safetied, so I can transfer the registration and insurance.

I might actually get all this done before the end of the month!  Only a month longer than it’s supposed to be done by, but late is better than never!

In my search for the contact number to Vital Statistics, I found something better.

It turns out you can fill out a Marriage Certificate Application Form online.  It then needs to be printed out and signed, but one of the options to send it in is to scan the signed document and email it.

Which I just finished doing.

It costs $80 for one copy.  It also takes 6-8 weeks for it to be processed.  Unless you pay an extra $40 for rush service within Canada, at which point it will be processed in 5-8 business days.

I had to suck it up and check off the rush service box.  This whole debacle is already taking too long!

The site also had a link to a sample image of a marriage certificate.

Apparently, I’ve never had one.  It’s the same design as a birth certificate, but a different colour.

In filling out the form, though, it had the option of a large, framing size certificate, or a certified copy of marriage registration.  So I think what I have that I can’t find is a framing size.

I included copies of my and my husband’s birth certificates, just in case.

I hope it is acceptable.

I foresee problems for my husband, too.

He took a photo of his birth certificate with his phone, used his phone’s editing software to clean it up, emailed the clear image to me, which I have printed off to send with our health care number application form.

His name doesn’t match his ID, either.

You see, my husband is from the East Coast.  As is common among French Canadians, he has 4 names – a first name, two middle names and a surname, but uses his second name.  It’s the only name that was ever used for him. I knew him for years before I found out I didn’t know what his first name was.  In fact, no one in his family uses their first name.  I don’t know the first names of my in-laws.  I’m not sure my husband even remembers them anymore! 😀

It became a bit of an issue when he was in the military, because they kept wanting to use the first name on his birth certificate on various documentation, but he never used it, and they are required to use the name the person goes by, which meant they couldn’t use his first name, but had to use his second name, but they couldn’t use his second name because it was not the first name on is birth certificate…

It was a very circular problem.

In the end, they reversed his first two names on the paperwork.

Oh, and I looked it up on the Vital Statistics website.  This is what is says about surnames “after marriage or entry into a common-law relationship”.

As a married person or a person living in a common-law relationship, you have a number of options for choosing your name.

If you are living common-law, it will be necessary to file a declaration with Vital Statistics in order to change your surname.  You will be charged a fee to obtain a certificate of Election of Surname that will provide proof of your new name.

Now, I can see the need for proof of marriage for someone who has just gotten married and wants to change their ID to reflect their chosen new surname.  But once that’s been done, that should be it.  It’s done.  They should not have to prove it all over again, decades later, when absolutely everything that person has is in their legal, married name!