Yes, we now have a Christmas tree up in our dining room.

But it’s not what you think! 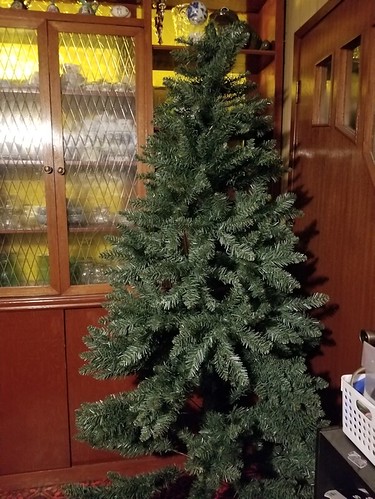 e do have a long Christmas season; a combination of traditions from both my own and my husband’s family that we continued, as something to pass on to our children..  Our first day of Christmas is something I learned from my late mother-in-law; November 27 – the Feast of St. Catherine.  This Acadian tradition goes back to the early years of the French coming to what is now Canada, and traditionally includes the making of tire (pronounced teer), a type of pull toffee.  It was done on this date because this time of year was typically cool enough to pull the toffee outside.  We haven’t done that in a few years, and judging by how cold it is already, I don’t think we’ll be doing it this year – though I do have my mother-in-law’s recipe!

A number of other days are marked over the next while until our last day of Christmas, which is on January 6, Three Kings Day (the Feast of the Epiphany).

So why are we putting the tree up now?

Well, part of it was just to get the tree and the decorations out of the basement.  Part of it is to have the tree up – no decorations yet – for the cats to get used to.

They don’t typically go for the tree.  DahBoy hasn’t tried to get into the tree since his first Christmas with us, when he was still quite small.  His mother never tried to climb it, though she did enjoy settling herself down under it, to nurse her boy.  Still, while this isn’t our first Christmas back here, it is the first time we’ll be able to set up our tree.  Last year, we put decorations on the umbrella plant, and they did go after those. At least, I kept finding some of them on the floor, almost every day! We want to start re-training them to stay away from it as early as possible!

4 thoughts on “It’s not what you think!”