The arborist called about coming over today to look around at the work that needs to be done.  Since we rather suddenly have to buy a new CPAP, budget demands we have to split the work.

As I went to unlock and open the gate for him, I paused to check out the fence line from the garage to the gate.  It is along this fence that there is a power line to the gate that I was able to use to plug in the weed trimmer, not long ago.  Some of the fence posts are tipping, and the line itself is sagging, so I wanted to take a closer look.

While I was finding a top wire that was no longer attached to its post and following it along to see what was going on with that, I found something I hadn’t noticed before.  Another thing to add to the “why is this here?” list! 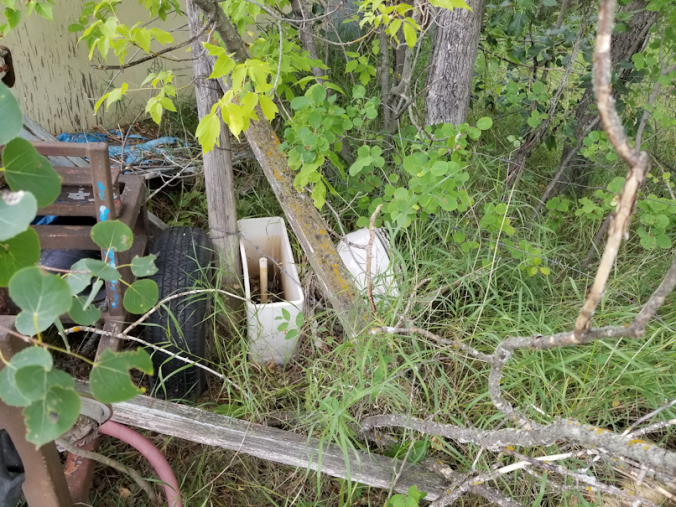 And this time, the tank, too.

This is next to the garage.  Where did it get hauled from?  Why did it get left in the bush?  Why is it there?

The post it’s leaning against is also part of the problem with the fence line.  It’s also tipping, and that’s why the wire I had been looking at was no longer attached to its post.

I am really looking forward to when I can move on to this section for clean up.

As for the arborist, after looking around, we worked out the essentials.  So for an estimate of $750 (half of the $1500 estimate he gave me for the whole job), this is what we will get done.

At the south end of the yard, clear some of the willow branches away from the power lines.

Just north of the house, clear some of the maple branches in one tree from the power line.

Top off the dead spruce tree so that, if it does fall, it will not hit the power line.

Top off the two maples leaning over the roof so that, if they do fall, they won’t hit the house.

Everything else can wait until spring.

So I’m thinking early October to get this stuff done.

It was funny to walk through the maple grove to look at the area there.  I joked that I’ve done quite a bit of work since he was last out.  “I noticed!!” he said.  LOL  No kidding!  We could actually walk through the area and not fight our way through a blocked off path, or have to avoid tripping over pieces of tree trunk and dead branches in the tall grass.

After he left, my younger daughter and I headed into town to go to the pharmacy.  When we got back, we saw Butterscotch coming out.  I’d left some food for her and the kittens earlier, and she was eating.

One of her kittens also came to see us. 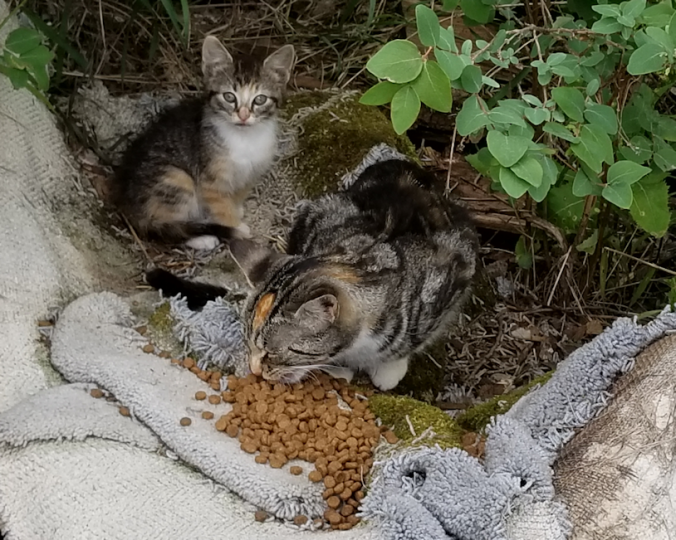 I look forward to starting to clean this area up, too, but I do like the idea of leaving some sort of shelter for the cats to use, too!