Just over a week ago, we discovered that someone had put glue into the lock on our main gate.

The last time this happened, my daughter and I went through our back gate, which isn’t normally used, to get out.  Then we had to get bolt cutters and a new lock for the main gate.  This was before we rebuilt the back gate, so at the time, the lock and chain where the only things holding the remains of a barbed wire gate up.  It was basically enough to keep the cows from getting onto the road, the first time they broke through by the barn and into our outer yard.

The first time it happened, because it was a combination lock, I couldn’t say with 100% certainty that it was glued.  The second time, there was no doubt.  At some point, I did think that I should go check the lock on the back gate, too.  We even considered going out the back gate, but decided not to, since we’d have to cut the lock on the main gate to replace it, anyhow.

I now know it wouldn’t have made a difference.

I finally remembered to go look at the lock at the back gate today, and it quite clearly has been glued. 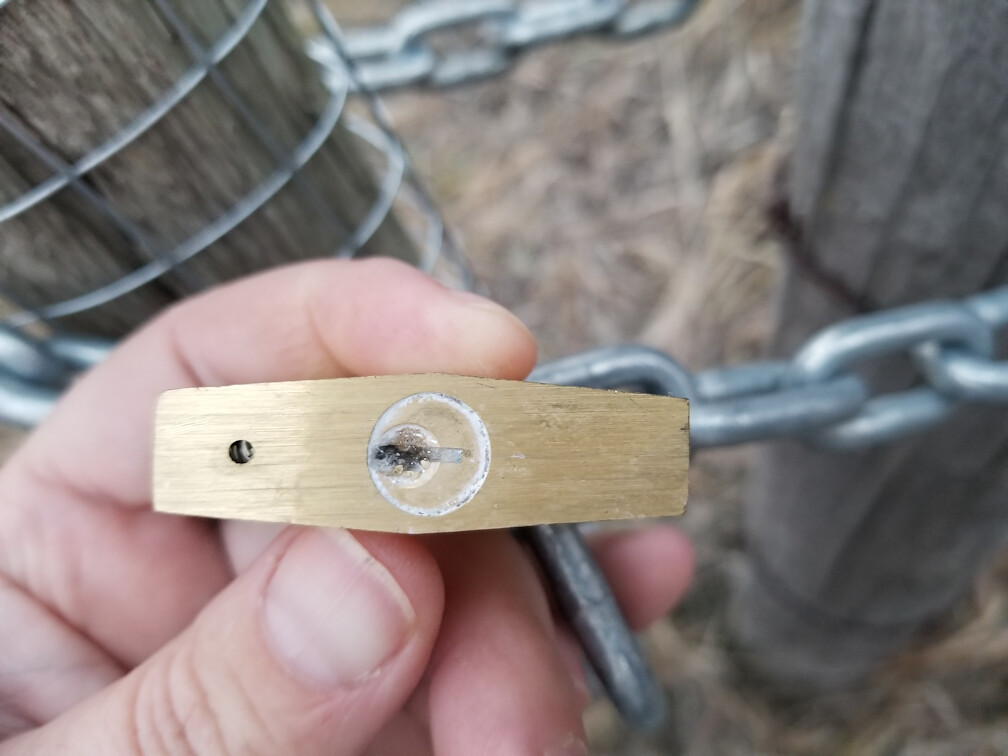 I could even see the lock was tampered with, before I got to it.  When we finished building a new gate, we left it like this.

We made sure the keyhole was facing downwards, so no rain would get into it.

We haven’t touched it, since.

When I came up to it today, I could see the bottom of the lock, since it was stuck sideways, and I could even see the white ring around it.  The person who did this would have had to reach from outside the gate to flip the lock around, then after they applied the glue, they didn’t put it back the way it was.

Which means that, had there been an emergency the required evacuation (like we were prepared to do, earlier this year), we would have been trapped until we could either get the bolt cutters, or force our way through the wire gate.

Maybe one of those sets of 4, all on the same key, which I would have done a week ago, if we had had the funds to spare. 😦

I wonder if the person who did this even thought of how potentially dangerous their vandalism is?