Things have been pretty quiet around here, lately.  We’ve been slowly decorating the house for Christmas, wrapping a few gifts, getting my husband to a medical appointment.  Tomorrow, the girls and I will be making a trip into the city.  Pretty boring and domestic stuff.

Thinking back to last year, I have really learned to appreciate boring and domestic!

Last year, we had spent the past few weeks packing away my parents’ stuff like crazy, and putting it all into a storage shed.   The van started making a horrible noise, so we weren’t using it (turned out to be the water pump) until we could afford to have it fixed.  We had only sporadic hot water, and it would soon be gone completely, until we were able to get a new hot water tank installed, just before Christmas.  We had also spent the weeks with nothing but a couple of frying pans, a stock pot, and a baking sheet (my husband and daughter bought the frying pans and baking sheet) to cook with.

But the movers were on their way with our stuff, and we were looking forward to finally being well supplied, not only with our own things, but stuff that wasn’t broken, rusted or otherwise unusable.

Then the movers arrived, and it went down hill from there. 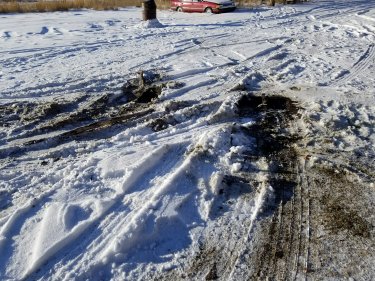 It still blows me away, how terrible it was.  Breaking our power pole at the garage, threatening to leave with our stuff – and that was before we started unpacking as fast as we could, and finding so much damaged stuff.  It still took months before we finally had to accept that there was stuff that was just plain missing; likely several boxes.

I went out the next day, to take photos of the damage they did.  It would take months before they would take responsibility and pay to replace the pole, but by then, the ground was frozen and it had to wait until spring.  So we had an entire winter of running 200 ft of extension cord from the house to the garage, so we could plug the van in and have light.

Yeah, things have definitely improved since then, and I am certainly thankful for that!