Can things just stop breaking down?

END_OF_DOCUMENT_TOKEN_TO_BE_REPLACED

Yesterday, my husband and I celebrated our 31st wedding anniversary.

Well. As much as we could!

I drove my daughter to work in the morning, which meant I was in town late enough for the grocery store to be open, so I picked up a few things before going to see my husband.

I found the tiniest little sheet cake for us to share – making sure to check if he was allowed to eat cake before I brought it in!

It was just big enough for 4 pieces, so he and I shared half, and I brought the other half home for the girls. 🙂

END_OF_DOCUMENT_TOKEN_TO_BE_REPLACED

Today, I went out to use The Beast. We haven’t had more snow, but I wanted to clear some paths that were blown over, widen a parking area, and make the path to the fire pit wide enough for my husband’s walker. We’re planning to have a cookout on the weekend. All this, I could do with the little electric snow blower, but is just much easier with the big beast.

Plus, I just wanted to use it, now that it’s running again.

Of course, things just had to go wrong, right? LOL

END_OF_DOCUMENT_TOKEN_TO_BE_REPLACED

Today, I finally was able to get outside and use the new electric snow blower around the house. I really wanted to get it done while the weather was still good; we’re supposed to start getting cold again in a couple of days. Nothing like the bitter cold we had before, but enough that I don’t want to be outside for 2 hours, or be trying to use the snow blower in high winds.

What a fantastic little thing Spewie is!

END_OF_DOCUMENT_TOKEN_TO_BE_REPLACED

And it’s so tiny and cute.

Just look at that little thing! I absolutely HAD to put it next to the big one before using it, to get a picture.

It’s a good thing I called ahead to see if any were in stock, and have it set aside, because there were only two left, and by the time we got to the store, in a small city about 45 minutes drive away, we got the only one left. I’d hoped to find one at a local (ish) hardware store but, not only were they out of stock, so was every other store the guy looked up for me! Thankfully, I was able to find one in another franchise, even if it meant an unplanned, longer drive.

But more on that later…

END_OF_DOCUMENT_TOKEN_TO_BE_REPLACED

Okay, time to catch up on the snow blower situation!

We headed out to pick it up yesterday, along with the two chain saws.

The guy walked me through what he did. Along with cleaning out the carburetor, he added an inline fuel shut off valve, which would help with a leak. There already was a metal shut off valve, but it was not the sort that should be turned open and closed often, as it would wear out more quickly than the one he added. He mentioned that the float seems to stick, which concerned him a bit, but he tested it out on a snow drift, and it worked just fine. He mentioned that the sticking float was causing it to run at full throttle, and showed me what he did as a work-around – something I was already doing. He started it up – of course, it gave him a hard time! – and did a bit of a demo for me. Then he drove it out of the shop and left it running while his dad (the owner of the shop) walked me through what was done with the chain saws. After I paid for everything, the mechanic grabbed some ramps and drove the snow blower into the van for us.

Then he had to take it out and drive it back it in, because he loaded it faster than I could tell him it had to go in backwards, or we couldn’t close the door!

END_OF_DOCUMENT_TOKEN_TO_BE_REPLACED

So, after not getting a call back from the small engine place, yesterday, I called them first thing this morning.

Which was a good thing, because it turned out my number that I left with them somehow got separated from my name.

I was talking to the owner this time, and he’s the one who worked on the snow blower in the first place, so it only took a moment for him to remember which one it was – it’s a rather unique piece of equipment, compared to what they usually work on.

In talking about the kill switch, he suggested that his son, who would be the one coming to get the snow blower, might be able to just fix it at our place!

Which would have been awesome.

END_OF_DOCUMENT_TOKEN_TO_BE_REPLACED

I got the kill switch off – that took longer than expected, as the guy that installed it added a ring above the nut that kept it from unscrewing. Which is great, except that it was so thin, it took me a while to even see it through my frosted up glasses. But see it I did, and found the right tool to get it off, and then it came off fine.

Also, my brother has the patience of a saint.

END_OF_DOCUMENT_TOKEN_TO_BE_REPLACED

It’s been getting chilly out there lately, so I’ve been glad to be inside, as much as possible!

END_OF_DOCUMENT_TOKEN_TO_BE_REPLACED

While walking about the yard this morning, there are areas that I can see where the deer have gone.

Along the edge of the spruce grove, there are now several areas like this. 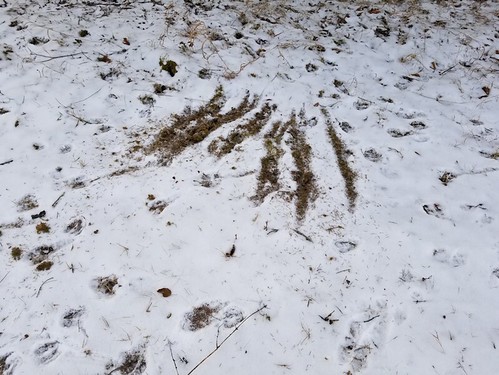 This patch is new.  It wasn’t there yesterday.  At the end of the row of spruces, near the feeding station, there is a patch they’ve been pawing at for a while, now, and it’s getting quite big.

I think, in the process of clearing out that area and taking out the bottom branches of the spruces, I also gave them better access to something in the moss that they like.  I can’t see what it might be, though.

While continuing around the yard and by the garage, I noticed deer tracks coming from the barn towards the yard, so I followed them.

Then I noticed something odd about one of the wire holders for the renter’s electric fence at the gate.  It looked bent.

Heading over, I started to find wire.

So I started gathering it up. 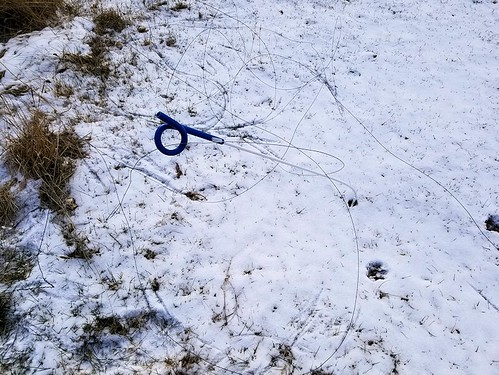 Here is most of it, along with the holder that is bent the most. 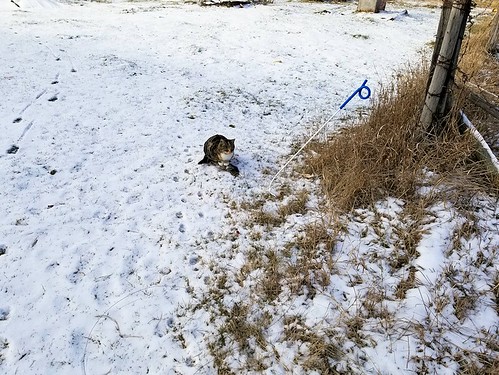 The other one turned out to be bent, too.  The wire is still running through it.  Considering how much wire got dragged into our side of the fence, I think it may well have broken loose right at the solar battery area.  Which is almost at the other end of the fence. 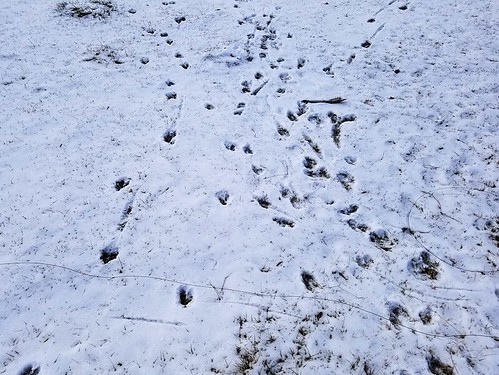 There were plenty of tracks, showing exactly where they came through!

The fence wire would not be easily visible, and with the cows moved out for the winter, the electric fence probably doesn’t even have electricity running through it right now.  The deer probably didn’t see it to jump over it, and would not have felt any shock to cause them to back away when they touched it.

We like the deer coming around enough to put up with any damage they do; there isn’t a lot.  But this is a bit more than just digging up the yard.  The wire should be fine and just need to be re-attached.  I believe those wire holders are new, from the last time the cows broke through.  I know the renter likes the deer, too, and this sort of thing is just what we have to live with when living around here.  I just called to let him know about the damage.  With no cows here, there’s no hurry to fix it.