This one is for The Hinouema! I found a fairly recent picture of Ginger. 🙂

Rolling around on my ratty-tatty floor.

He is such a sausage.

He has the most amazing, golden eyes.

I just have to share something I got in the mail today, from a dear friend. She is so hilarious!!!! Check these out! 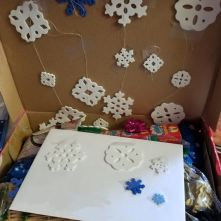 First, there’s the festive packing tape covering the box itself. Then there was the “snowfall” when it was opened, then there was the array of tiny little gifts for everyone – including treats and a skunk toy for the cats!

I’ve got the best friends. 😀

After our deer visitor left this morning, I went out to feed the cats.  Once again, I saw the black and white dad-cat on the dresser in the sun room – and once again, he ran off as soon as he saw me.  The rest of the cats were milling about as if they were starving.  The girls had put food out for them last night, but the bowls were completely empty by morning.  The braver of the cats were eating the food before I even finished filling the bowls! 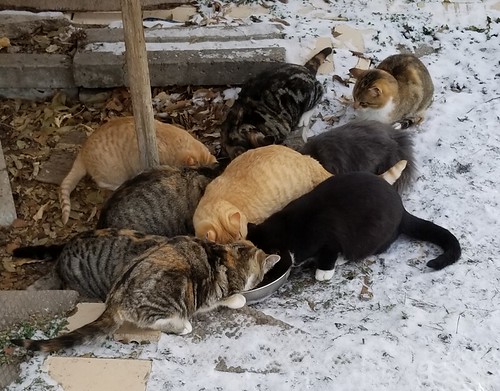 Then I stepped back to let the shier ones get to the bowls, and watched them for a bit.  There’s Rosencrantz (or Guildenstern) at the top; Butterscotch and The Outsider on either side.  Big Jim and Bob next to Beep Beep and Doom Guy, then Rosencrantz and Guilden… wait…

This is what we see, in varying configurations of floofs, when we look out our bathroom window. 😀

One of the things we like to do is leave the inner doors open, so our cats can look outside.  The outer door at the main entry has a window almost all the way to the bottom, at the perfect height for them to sit and look out.  The step outside, however, is lower than the floor, so the cats outside have to make more effort to look in.

As I walked past this morning, I heard DahBoy making some noise at the door.  He was batting at the bottom of the window, where I could just see the top of a head and front paws of another tuxedo, batting back!  😀

Seeing this, I decided to grab some cat treats and see if I could convince some kittens to come close.

With the rain we’ve had lately, my usual places to sit are on the damp side, so I opened up the sun room, leaving a trail of treats, to see if any would come in.

Of the kittens that did come out, all but one of them eventually came into the sun room! 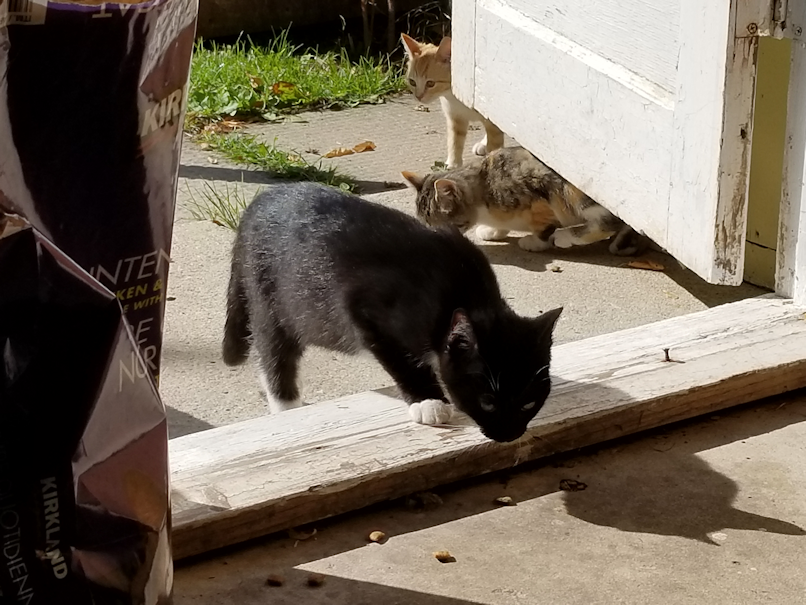 Doom Guy, the tuxedo, was quick to go inside, though he was not willing to let me pet him today.  While I saw the bigger orange tabby around, only the teeny tabby stuck around.  Only one of the calico-tories showed up.

This is the closest Rosencrantz or Gildenstern has come near me in ages!

Corvo, the grey, came in, but was more about checking things out than having treats.

He was the only one to actually start climbing around, going up onto my dad’s chair.  It’s a rocker, so I’m a bit surprised he’d go onto something that moves.  He also started to push his way into the cube shelf, knocking out a spare insect zapping racket in the process, and scaring himself out of the room! 😀

Even the teeny tabby came in, but not much farther than the doorway.

I’ve left the outside doors to the sun room open for now.  There were still treats on the floor, and I figure my not being there would let the shier kittens have more of a chance to get some.

I want to snuggle them so much!

We got to play tourist again, today, this time heading out to visit the snake dens.  It turned out to be a fairly cool day, so I wasn’t expecting to see very many.  We did see quite a few, though nothing at all like when they first emerge in the spring. 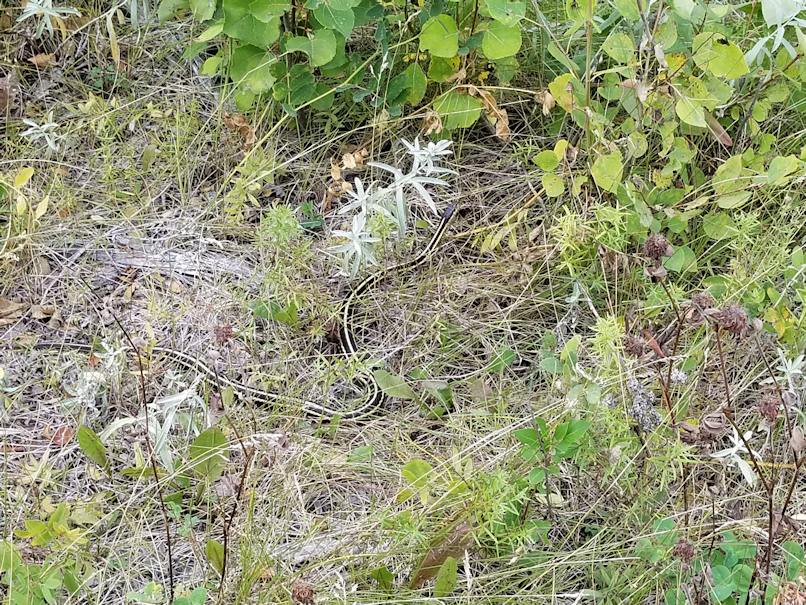 We saw many along the paths, including some we only saw because they moved when we got too close for their comfort.  More than a few times, we would look ahead and wonder; were we looking at a bunch of snakes up ahead?  Or a bunch of twigs?  Sometimes, it would be both.  Other times, we would see a big branch on the path ahead, only to have it move and turn out to be a huge female (female garter snakes are MUCH bigger than the males). 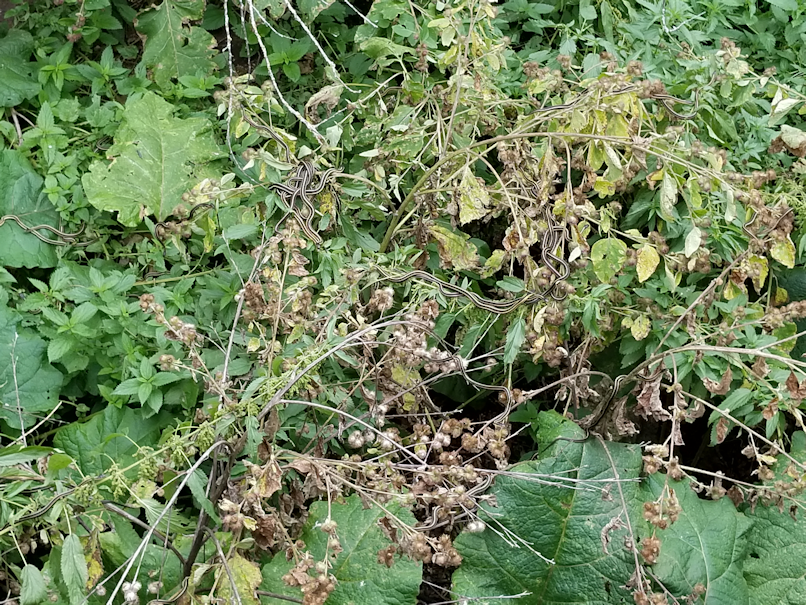 The dens were filled with huge burdock and nettles, and one of them had snakes draped all over the place!

A few were climbing trees, too.

I’m glad we were able to make the trip while the weather is still holding.  While going in the spring is much more dramatic, I rather like that we had the entire area, all to ourselves!  It made the hike much more enjoyable.

Hmm…  I think living in the city for so long has really peopled me out. 😀

Beep Beep and her Tuxedo were around the house yesterday evening, so I decided to get a bit more aggressive about this whole luring of kittens thing.

I brought out the cat nip and the cat treats.

They ignored the cat nip.

They went nuts over the cat treats!  Beep Beep was after them to the point that she would eat what I gave her, then find the one I gave to her kitten and eat that one, before he even figured out where it was.  She’d even push him away!

We have a house guest for the next while, and she and my daughter came out to help, and to play with the cats.  By the time they came back in, Rolando Moon, Teeny Tabby, Butterscotch and one of the calicos made a showing, too.

We did actually get to pet the tuxedo.  He’d jump a bit and look, but would quickly return to hunting treats.  He’d even try and take them out of my hand, sometimes, but he was slower about it and his mother would usually push her way in and take it first, no matter how we tried to distract her with others, so on the ground they went.

While in the area, I paused to take a look at my mother’s white roses.  They have the darkest rose hips!  So deep a read, they are almost black.

While walking past the garbage can in front of the sun room, I was startled to find it looking back at me!

Her tuxedo takes after his mom. 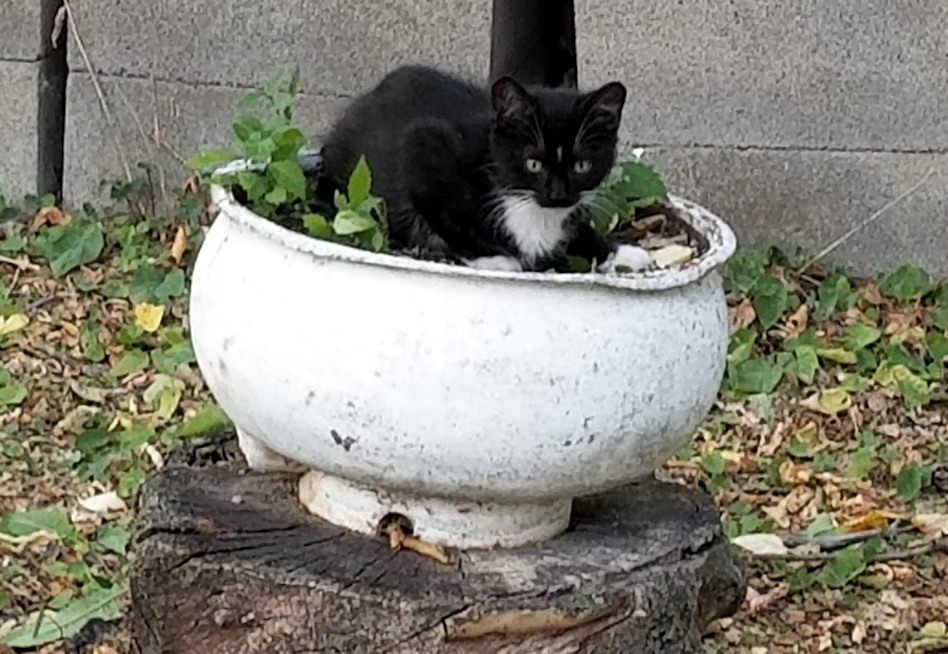 While doing my evening walk around the yard, I ended up spending almost an hour, near the kittens.  I had brought out some cat food, and refilled the old pot that I am using for water near the garden shed, then just hung out.

So did the mosquitoes.

It was worth it. 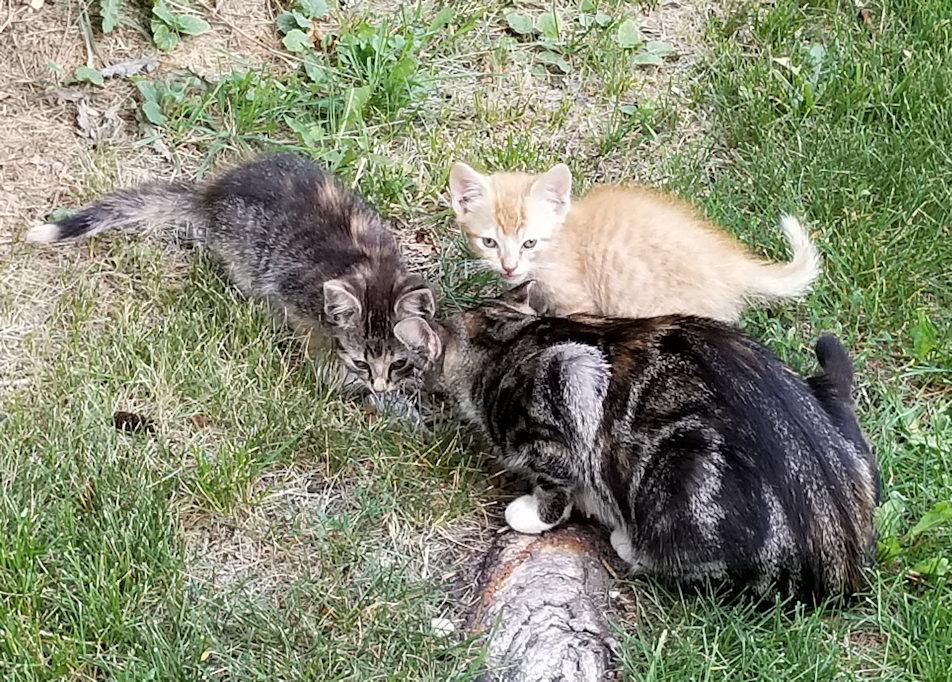 Butterscotch’s kittens love an exposed root, sitting on it or stretching themselves out along its length.  So I put a bit of cat kibble on it.

There are only two in this photo, but for a while, both calico/trourties, and the teeny tabby, where eating with their mom.  The bigger tabby showed up later.

Beep Beep’s kittens enjoyed some kibble, too, but weren’t too sure about my being nearby!  So they hid under one of the old car seat/benches.

I suppose it’s a good thing we aren’t planning to clear this junk away anytime soon, because they love climbing all over it.

I took some video, too, and am uploading it right now.  I’ll include those in another post. 🙂