Beep Beep and her Tuxedo were around the house yesterday evening, so I decided to get a bit more aggressive about this whole luring of kittens thing.

I brought out the cat nip and the cat treats.

They ignored the cat nip.

They went nuts over the cat treats!  Beep Beep was after them to the point that she would eat what I gave her, then find the one I gave to her kitten and eat that one, before he even figured out where it was.  She’d even push him away!

We have a house guest for the next while, and she and my daughter came out to help, and to play with the cats.  By the time they came back in, Rolando Moon, Teeny Tabby, Butterscotch and one of the calicos made a showing, too. 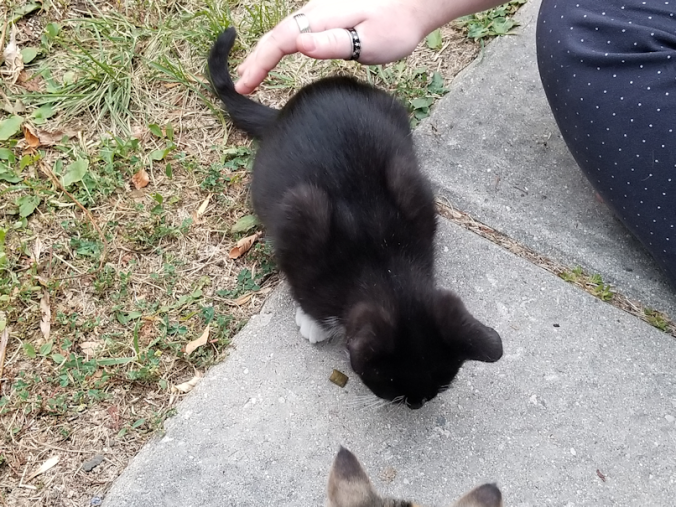 We did actually get to pet the tuxedo.  He’d jump a bit and look, but would quickly return to hunting treats.  He’d even try and take them out of my hand, sometimes, but he was slower about it and his mother would usually push her way in and take it first, no matter how we tried to distract her with others, so on the ground they went.

While in the area, I paused to take a look at my mother’s white roses.  They have the darkest rose hips!  So deep a read, they are almost black.