My daughters have been diligently working their way around the yard, methodically raking leaves out of the edges of the trees and the many flower beds all over the place, picking up wind blown sticks, and generally cleaning things up.

I was called out to see what they found next to the small people gate.

We’ve walked past this many times, of course, and saw the dried and matted plants at the base of a tree. 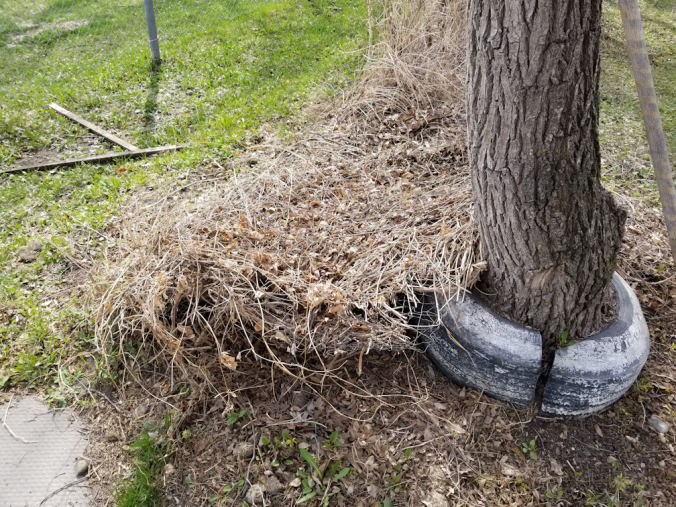 Those two sticks on the side were stuck in it.  Just a mess of dead plants to clean up is all.  Right? 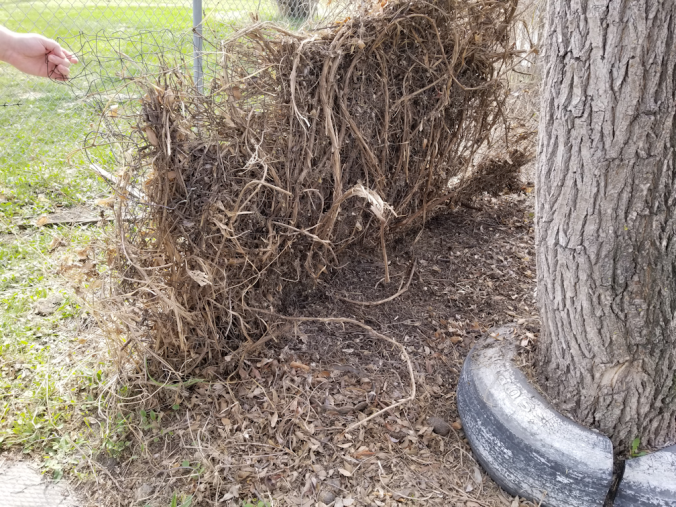 So… that’s wire fencing, all stuck in there.  We’re guessing the sticks had held the wire up for the … vines? … to climb.

Hold on.  What is that, under there?

A glass bowl, with gold trim.  Hidden under the dead mat and buried under more leaves.

A bowl with no bottom.

Not a broken bottom.  There’s no sign of the broken pieces.  Just… a bowl.  With no bottom.  Half filled with dirt and leaves.

My daughter used on of the sticks to prop the mat up and hold it in place, while they rakes around it.  We’ll have to figure out how to get it, with the wire mesh it’s grown around, out of them.  Most likely, we’ll just have to cut it.

My siblings have been cutting the lawn and whatnot, since the house has been empty.  This does not look like something they would have planted and set up.  It looks like one of my mother’s projects.  Which means, it’s been like this for quite some time.  Maybe 5 years?  Just a guess, on my part.  I have no way to really know.

And what’s with the broken bowl under it?

Or, someone took the time to do this last year, when no one was living here, and that doesn’t make much sense, either.