The sun room is now cleaned and put back together into a usable space!

The challenge in rearranging the room was that is has to fit two uses.  One is to have a nice space to just sit and enjoy.  The other is to put away and store tools and supplies.

The initial cleaning was a huge job, so the difference is very stark!  Here are the before and after pictures, starting with the East side. (click on them for larger images)

The dresser now holds the tools that I found in the sun room as I was cleaning it up, including a collection of saws.  I even found one with a long, very thin blade that would be perfect for cutting branches in odd places.  Except it looks completely dull, so we’ll see.  I also found several different types of hammers and hatchets, including a hatchet that is also a hammer. 😀  Buckets of screws, clothes pins, and even the containers I used to take deer feed out, are all now tucked away into the dresser.

I just realized, I forgot to check under the seat of my dad’s walker.  He used to keep tools in there, too.  😀

That tiny instrument hanging on the wall is a music box.  I remember it from when I was a child! 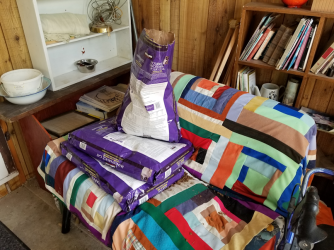 Now, instead of pictures on the walls, I have saws.

Which is much more my style, anyhow. 😀

On the West side…

I chose a before picture that was taken after the dresser was moved out, since that was added by us from another room and was only there for the winter.  I’d also already moved the plastic couch that is in the East side “after” pictures.

Whoever wants to use the rocker will have to move my dad’s walker out of the way.  Depending on how things work out when we clear out the old kitchen, it might end up being stored in there.  My mother likes to use it when she visits.

In the “before” picture, about half of that stuff is what we brought into the room, including the weed trimmer.

I am keeping the prie dieu and plan to pick up some wood oil for it.  The side facing the wall is in much better shape.  I am guessing the majority of the damage to it is from the sun (as I notice it is in a sun spot…).  It’s a bit rickety at a pair of joins on the bottom, and I want to investigate the best way to repair it.

There are a few things not going back in, including one shelf (the dresser is a much more useful and attractive fit for the space) and the metal table.  Having packed all of the books, phone books and magazines my mother had in there, the two shelves I did decide to keep have nothing to put in them for now!

Knowing us, that won’t last long. 😀

My dad’s favourite seat is a glider rocker that has lengths of pipe added to the legs to make it higher, so it would be easier for him to get in and out of it.  I am happily keeping those, since we’re not exactly limber, either.  I plan to replace the cushions when I get the chance.  These original ones are very old, and very stained!

With both the glider rocker and the rocking chair on the same side, we have to make sure they don’t get pushed back too far, so no one will bump into the windows!

There will, of course, be other changes made over time.  I want to add some hooks on the wall by the old kitchen window, so I can hang the extension cord when it’s not being used.  We might even add some decorative items on the walls.  Who knows?  Minor stuff.  For the more major stuff, the outside doors need to be replaced completely.  The screen door doesn’t even close properly anymore, and the inner door has a lot of water damage on the bottom.  Even the doors into the old kitchen should be replaced at some point, but they are in better shape.

No hurry on any of that, though.  The main thing is that the room has been packed up, cleaned and can once again be used!

Next and last room (not counting the basements) to pack up, clear, clean and rearrange: the old kitchen!