Just a bit of catch up from yesterday, since I shut down the computer when we heard a thunderstorm coming in.  It ended up passing us by, but even so, it got pretty loud out there!

When doing my evening walk around the yard, I decided to head around the main garden area to check out the choke cherries.

There is one chokecherry tree on the south side of the garden, that my mother planted among the raspberries.  It has very few berries on it; I don’t think it’s getting anywhere near enough sun in that location.  The few it has are starting to turn a darker red.

This first photo is from one of the trees hidden among the lilacs along the north fence line. This next photo is from a tree about 50 feet away. 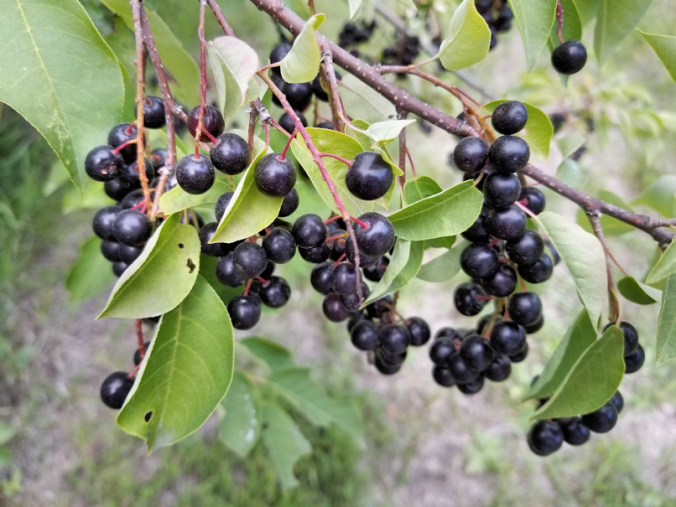 These black ones are basically ripe.

Quite the difference between the two trees!

I’m not sure if we will be doing anything with them.  My mom was suggesting making jam, but I am really not up to that.  Especially for such a small amount of berries.  I wouldn’t mind trying to make wine with them, but we don’t have the set up for that right now.  They’re not the sort of thing you eat straight, though you certainly can.  They’re more pit than berry. 😀

Yesterday was our day to go into the city for the Costco shopping.  It was a relatively small shop, though.  My husband gets his disability payments at the end of the month, and gets both CPP Disability (from the government), which is a fairly small payment that comes in a few business days before the end of the month, and then his private insurance payment, which comes in on the last business day of the month.  So we’ve been doing our monthly shop with the first one comes in, the paying the bills with the second one.

Because his CPAP died, we made sure to order that as soon as the money came in.  It ended up costing about CDN$650, which is an incredibly good price.  His insurance will reimburse a portion of that, but that won’t happen until next week, at the earliest.

Hopefully, the CPAP will come in quickly.  Although the sleep apnea does not seem as severe as it was years ago, the affects are being felt.  It’s not even the lack of oxygen, but the lack of REM sleep that can really cause problems.  When he was first diagnosed, the specialist estimated my husband hadn’t had any REM sleep for at least a year.  It almost killed him.  So we don’t want to take any chances!

The CPAP was ordered on Friday and my husband got a shipping notice before the end of the day.  However, the company can only guarantee shipping up until it gets to Canada.  After that, it’s up to Canada Post.  So the shipping estimate is 2-3 business weeks.  !!!

I don’t expect it to take that long.  Packages tend to get shipped faster than envelopes.

With that done, we basically did a half month shop, rather than a full month shop.

Now, I want to make one thing very clear.

Okay.  Maybe “hate” is too strong of a word.  Still, I really, really, really dislike shopping.  I don’t like being around so many people, in crowded aisles, etc.  Basically, everything about shopping, I dislike.

Which means a trip to Costco uses up all sort of spoons, until I’ve got nothing left but knives!

Which is why I like to have at least one of the girls with me.  They make sure I don’t just turn around and leave half way through shopping.  It’s much more pleasant with their company!

So we (both girls came along this time) did the Costco shopping, gassed up the van, and I even remembered to bring the jerry can to get premium gas for the riding mower (regular gas at Costco was $1.169, compared to $1.239 elsewhere, and premium was $1.269, so it was worth doing it there!).

Before the move, our usual routine was to do the Costco shopping for the big stuff, then go to a local grocery franchise for the non-bulk stuff.  In the years we were away, that franchise expanded into the city here, but there are very few of them.  The girls wanted to pick up something we knew was carried by this company.  We did consider checking out a couple of the other grocery chains, but really don’t like them, so I looked up the nearest store of the one we do like.  It turned out there was a location a convenient drive from the area we were in, so we decided to check it out.

Did I mention I hate shopping?

When we got to the place, the first thing we saw were the extra signs.  It was an “international” store, with online shopping.  Of course, that had us joking about whether they delivered to where we live, out in the sticks.  It also had a “kitchen” area.

Then we walked in.

I must have looked like a country yokel that had come into the big city for the first time!

We couldn’t believe this place!

It was huge and open.  The aisles were wide, and accessible (knowing so many wheelchair and walker users, it’s now automatic for me to assess aisle space and judge how well someone in a wheelchair would be able to navigate).  The “kitchen” area had a wide variety of local and international foods, hot and fresh, with a lovely, well lit and welcoming seating area.  They had several food “bars”, with the usual things like chicken wings, olives and Chinese food – and a perogie bar!  There was a cheese island.  Half the store was dedicated to international foods – three aisles were of just Filipino food.

Before the move, there were a couple of local grocery stores that had stuff we couldn’t find anywhere else.  One was an Italian store that specialized in European imports.  The other was a Chinese grocery store that included hot food take out/dine in areas (with some of the best bao I’ve ever tasted).

This store was like those two, plus the regular grocery store, merged into one.

It was heaven.  A total joy to shop there!

We had to deliberately stop ourselves from going through all the international aisles, so we wouldn’t completely blow our budget!

We need to come back.  With money.  All three of us agreed that this store alone was worth the drive to the city to shop in.

Did I mention I hate shopping?

I can’t wait to go back.  And this time, we’ll plan on having lunch there, too!