I finally got some photos of a drink mixed using the chokecherry vinegar I made not long ago. 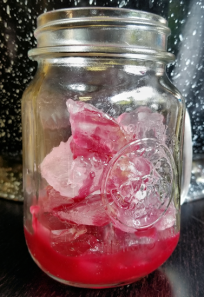 I have been using it for other things already.  One of the things I like to do is put some frozen mixed berries in container to thaw out over night and enjoy them with breakfast.  Usually, I sprinkle a bit of vanilla sugar over them while they are still frozen.  I tried it with a drizzle of chokecherry vinegar, and it worked out very well!  It made plain, ordinary toaster waffles really something!

I’ve drizzled some over fresh cantaloupe, which was also really nice.  It would work just as well over any melon or fruit salad.  The vinegar adds just the right tang.

For a drink, we spooned some over some ice (about 3-4 tablespoons for a large glass), then added ginger ale.

I don’t actually enjoy ginger ale as a drink on its own, but I do like it as a mix.  Half and half with orange juice or cranberry juice, with frozen berries instead of ice, is a favorite of mine.  This chokecherry vinegar would be right at home in any drink like that!