Things are much, much less active, now that the yard work is done for the year!  We’re settling in to an indoor routine, which is pretty domestic.

I am enjoying the relative peace and quiet.

Now… I am NOT a morning person.  Never have been.

But we have critters to feed, and I have my morning rounds to do.

Thankfully, there are things that make it worthwhile. 😀

The first thing on the list is taking care of the outside cats.

We have found they don’t like their new cat cave all that much, so this morning, I rearranged things to give them access to their cuddle spot, and still provide a “roof”. 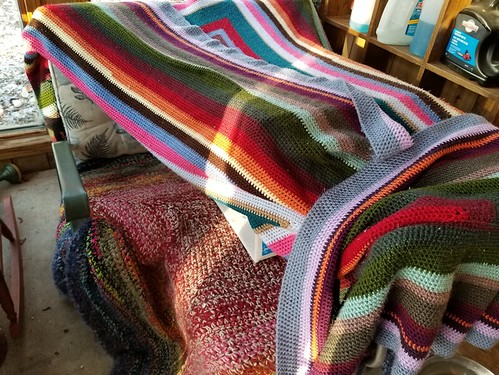 I could see they’ve been using the foam insulation inside the aquarium box to scratch at, but they don’t seem to stay in there.  So I turned the box so that it’s on both the swing bench and the transfer chair, and tucked the other half of the broken foam insulation behind it, along a hand rail on the transfer chair, to help hold the blanket up.  The cats seem to enjoy being able to go on top of the box, so this way, they should be able to have both – their cuddle corner and a higher spot to sit on.  😀

After giving the cats their food and water, I put out feed for the deer and the birds, then I do my rounds in the yard.  For now, I’m only picking up any larger branches that may have fallen during the night and leaving the smaller ones in the snow to clean up in the spring, before our first mowing of the lawn. 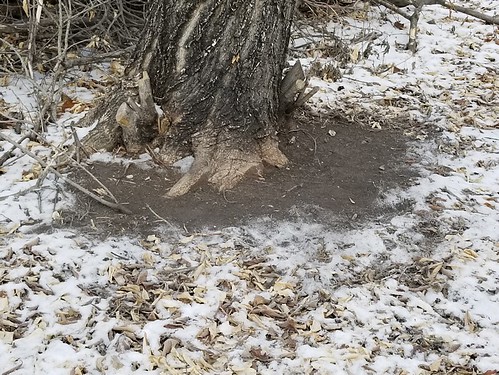 These are all areas the cats have worn down by taking dust baths in them!  They roll around in these spots so much, not even grass can grow in them! 😀

We still have a couple of crap apple trees with frozen apples on them.  The one with the larger apples, I can’t reach to knock them down for the deer, but I tried for the other one this morning, and managed to knock some of the little apples down with the old mop handle I found.

While I was doing that, I found myself being watched, from one of the branches! 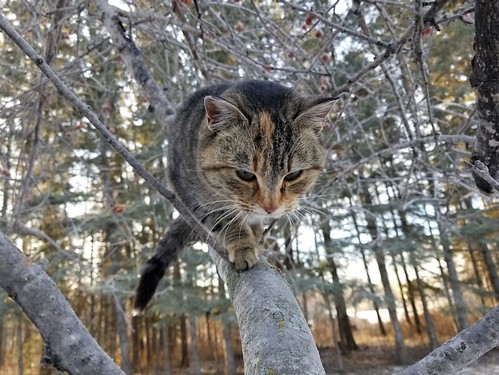 I tried to get a picture of Beep Beep, sitting like a loaf on the branch, but as soon as I stopped knocking at the apples and got my phone out, she came right over.

I just managed to get this awesome shot before she stuck her face into my phone. 😀

The tree wasn’t the only thing she climbed.  As I started walking away to continue my rounds, she was suddenly climbing up my back and perched on my shoulder!  She may be filling out quite nicely, now that she has a reliable supply of food, but she’s still light as a feather!

Part of my rounds is checking along the spruce grove fence line, the lights (I’ll have to pick up more spare bulbs when we’re next in the city) and the power cable.

I may not be a morning person, but I can still appreciate how beautiful it can be! 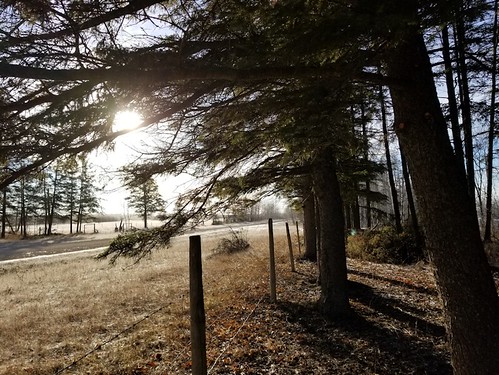 In the summer, if I were standing in this same spot, facing the same way, the sunrise would be behind me.

After finishing checking the lights and cables and heading for the garage, I looked back and saw this. 😀 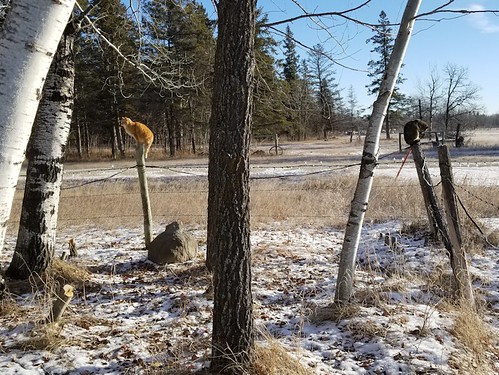 Rolando Moon had been perched on that rock with another rock cemented to it (so far, no one in my family knows why that’s there!), but after Beep Beep became a post cat, Rolando Moon seemed to think that was a good idea, too!

I wasn’t able to get a photo after this, as I found myself with an arm full of Doom Guy, but at one point, Rolando Moon and Beep Beep were both perched facing the same direction, licking the same paw, in sync!  It was so funny.  A perfectly matched set. 😀

Now it’s back to our indoor winter hibernation.  I’ve got some crochet I need to catch up on, and we’ve been decorating for Christmas, too.

And if all goes well, by this time tomorrow, we will have a snow blower. 😀  I just hope it will fit in the van!!

One thought on “Winter(ish) Morning Routine”