Well, something new to us, anyhow!

One of our errands yesterday was at the international grocery store in the city.  Right at the doorway, their new seasonal fruit or vegetable display table had jackfruit.

We have never tried jackfruit before.

My husband picked up Amazon Prime, since we have all of 2 channels on our Farmer Vision, and they both kinda suck, so he could watch movies or TV.  I tried going through their movies and found next to nothing that interested me, so I went looking through the TV shows and found A Taste of History.  I’ve made it to season four, and have really been enjoying it.  I also happened to watch an episode recently that included jackfruit.

So we decided to buy some.

Not a whole one – those things are massive!  But they did have some in pre-cut chunks. 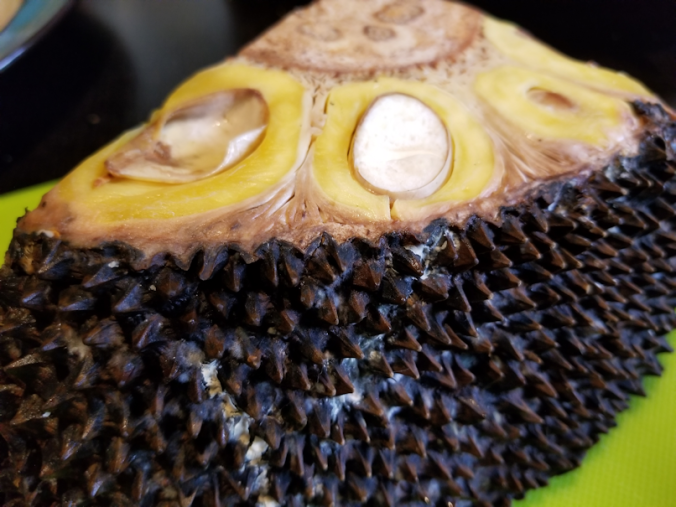 After a busy morning that included a dump run and finally moving the rest of the pile of trees from beside the driveway gate, we decided to give the jackfruit a try with lunch.

Thinking of what I saw on the show, I got the pieces cleaned out. There is a lot for the compost out of that one wedge!

I admit to come trepidation, as I’ve read of it as being similar to durian.  My older daughter and I tried a durian drink once, long ago, and were pretty horrified.  More by the fleshy texture than the flavour, which we were no fan of, all on its own!

This, however, has a very light pineapple flavour.  No acidity to it, really.  The texture is much denser; almost rubbery. It was the texture that put off my younger daughter.  My older daughter likes it, while my husband flat out refused to try it! 😀

Only after did I look up what to do with jackfruit, and read that I apparently should have worn gloves, or oiled the jackfruit, the cutting knife and cutting surface, because of its sticky sap that’s hard to clean up.

I had no problem cleaning up.

I also read that it makes a good meat substitute.  Particularly as a pulled “pork.”  With the texture of it, I can almost see how that would work.

Nah.  Who am I kidding?  The texture isn’t at all like meat, and it just tastes like pineapple without the acidity.  Maybe that changes with cooking, but I am doubtful.

With this small wedge, we didn’t bother doing anything to it, and my older daughter and I shared it, raw.

From what I’ve read, the seeds can be boiled like potatoes, for about half and hour, and eaten.  There wasn’t enough in the wedge we got to bother trying that.

Final call: 2:2 for and against.  So while we might get a small wedge again some day, we’ll probably never pick up a whole jackfruit.