Today is officially Thanksgiving, so I will happily say again, Happy Thanksgiving!  I hope my Canadian visitors had a wonderful holiday weekend, with lots of food and family – or a lovely, quiet, non-party weekend, like we did!

Since we did our celebrating yesterday, and today was a fairly pleasant day, we were able to get some work done outside.  The girls were able to rake up lots more leaves to layer on the flower garden by the Old Kitchen, which I’m pretty excited about.  Lots of lovely organic matter! 😀

We are going to have to stop keeping the sun room doors propped open overnight.  More turd bombs were discovered this morning, plus something chewed a hole in the bottom of the open back of cat kibble.  Most likely the skunk, we think.  We did end up still leaving the door open during the day.  Which makes looking out the bathroom window something to look forward to! 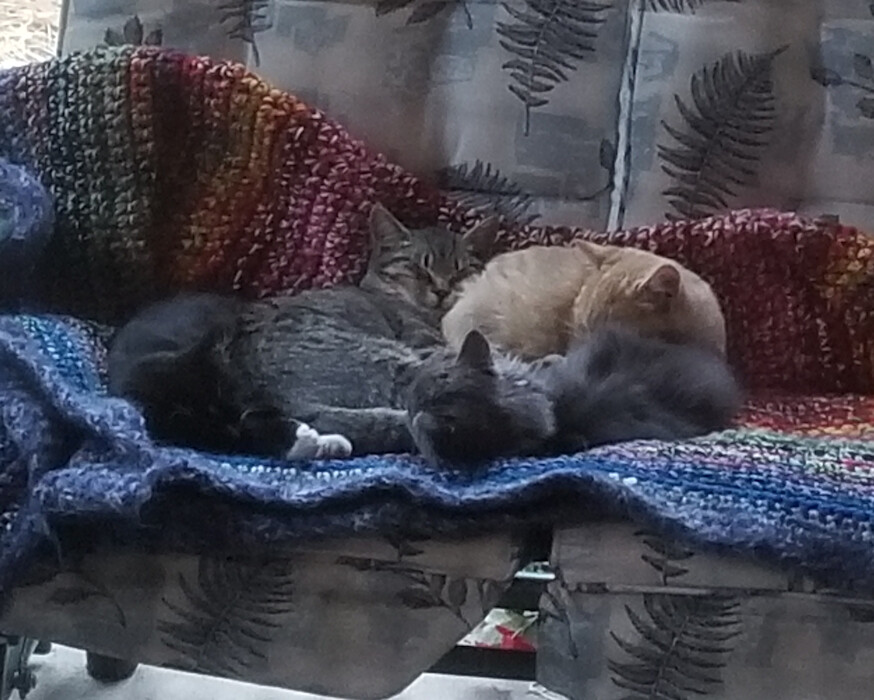 I was called over to see this adorable pile of fluff, and while I was taking photos through the bathroom window screen, I started getting called to look out the living room window, to see a deer!

It was under the crab apple trees, looking for apples, and we did get some photos with the DSLR.  I will upload those tomorrow to see how they turned out.  Unfortunately, I did not manage to get a photo of the deer standing up on its hind legs, trying to reach the apples on the tree!

After a while, it slowly wandered away down the garden, and we couldn’t see it anymore.  However, when I went into the master bedroom, I found I was able to see it through the maple grove.  As I stood watching it, I suddenly saw a second one, going through the trees and heading towards the house! 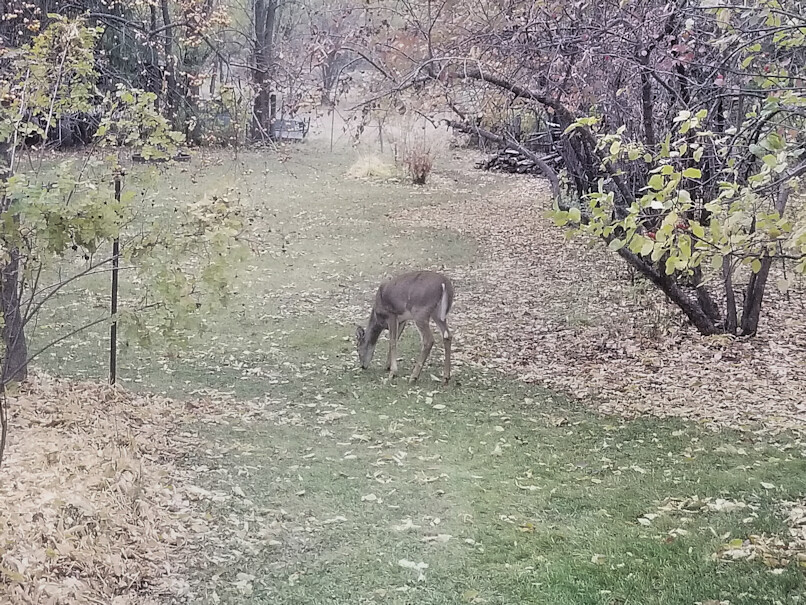 I was able to get a few photos through the screen of the west facing window.  This one was also going under the crab apple and plum trees, looking for fallen fruit.

After the deer left, I went to work on the sun room.  Most of the kittens took off when I came in through the Old Kitchen.  Doom Guy, however, managed to dash in before I could close the door!

Good thing the inside door to the rest of the house was closed!

I started taking things out of the sun room so I could clean the floor.  In the process, I have come to the conclusion that the turd bombs are not from the cats, but from the skunk.

After I got the mess cleaned up, washed the floor and transferred the cat kibble from the bag with a hole into a bucket, I sat outside to clean my late father’s wheelchair with a disinfectant cleaner while the floor dried.

When I was able to start putting things back inside, I found the sun room occupied already. 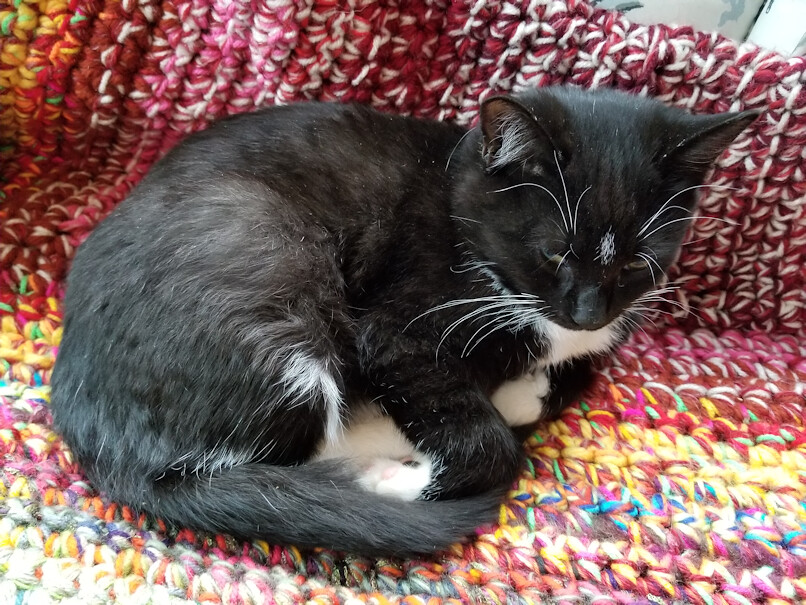 Doom Guy is such a cutie!  He even let me pick him up and sit for a while with him cuddled in my arms.

Later on, I found him back again – this time with company! 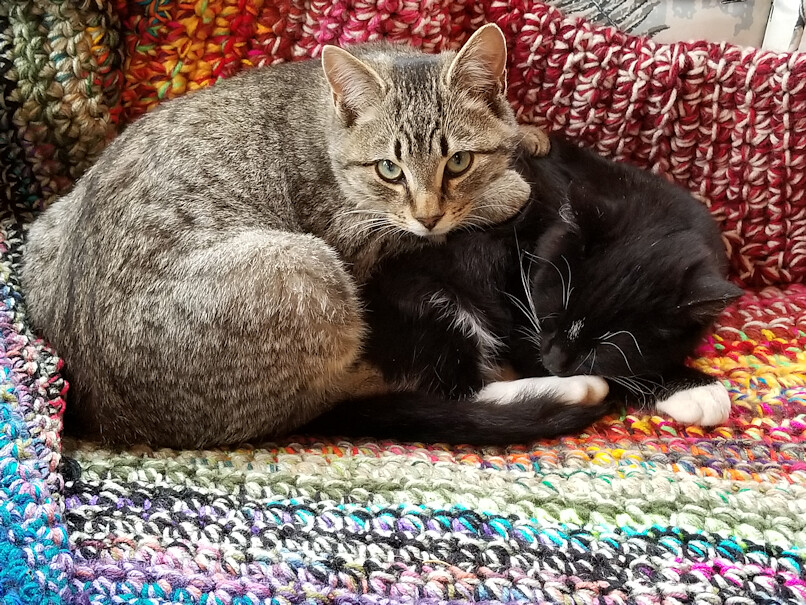 Corvo is letting me come closer, but still won’t let me pet him. 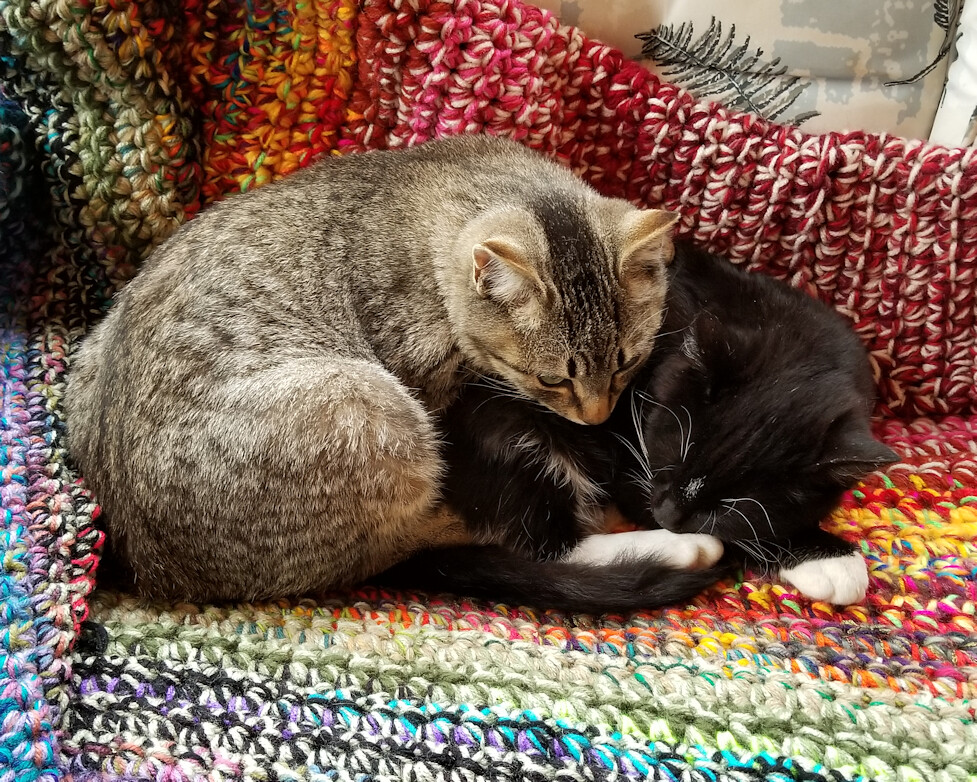 After all was finished and we were settling in for the evening, I found out about a legendary raid – Mewtwo – in Pokemon Go that was happening in town.  My daughter and I have not been able to do one yet, so we decided to head into town and join the raid.

When I came out the door, I was immediately set upon by Doom Guy.  As I picked him up to cuddle, I saw we had company… 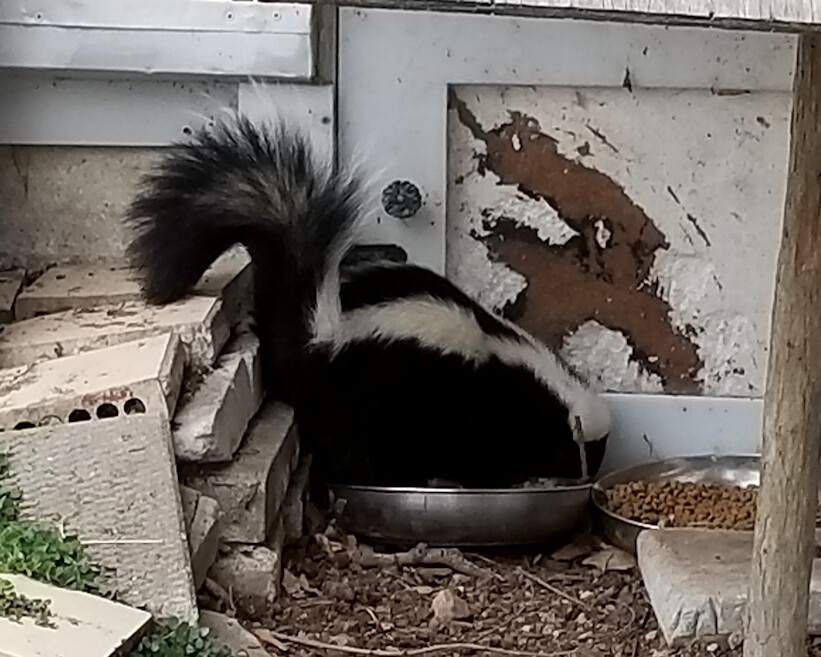 (In fact, he’s back right now.  I can hear him under my office window, knocking the metal food bowls around, as I write this!)

Before we left he dashed into the sun room.

Well, it’s now closed up for the night, so hopefully, no more turd bombs!