You would think, living in the middle of nowhere, we wouldn’t have to worry about things like vandalism and security as much as when we lived in the downtown area of a major city.  In many ways, that is true.  However, we are certainly not immune, and in some ways, folks in the country have more to worry about.

I won’t get into the reasons here, but having to put locks on our gates has been quite disheartening.  It is what it is, however, and we just deal.

My younger daughter and I loaded up the van to go to the dump, then she walked ahead to unlock the gate while I drove over.

She couldn’t unlock it.  The key wouldn’t even go into the lock.

This would be why. 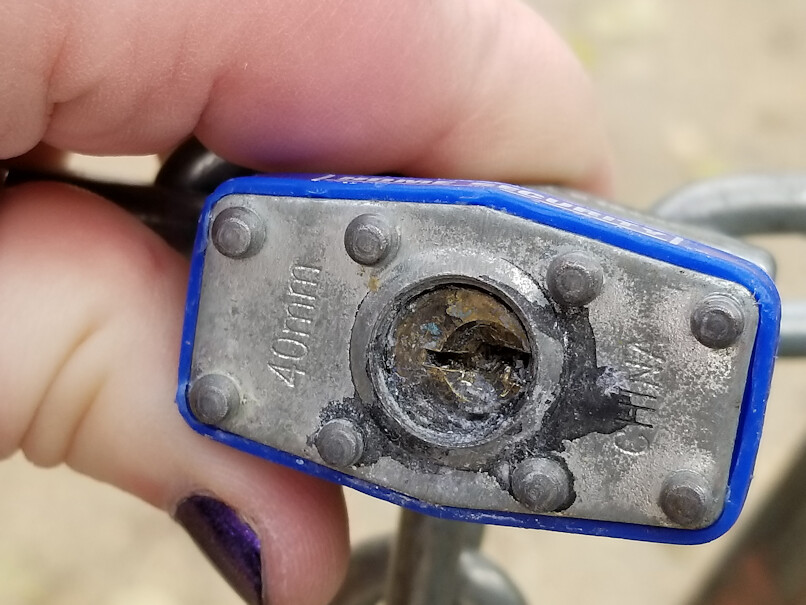 What you’re seeing is after my daughter used a knife to try and clear it, to no avail.  Not that it would have made a difference.  Even if she had been able to get the key in, the glue would have prevented it from turning.

(The black, by the way, is from a graphite lubricant I used when the weather was making the lock a bit stiff, about a month ago.)

While we were at the gate, a candidate for some local elections came by to drop something off, so she saw what we were dealing with, too – and later saw my daughter getting into the van with the bolt cutters, after we got through.

So our trip to the dump was followed by a trip into town to get a new lock.

This is the second lock we’ve had to replace.  I don’t expect it to be the last, unfortunately.

5 thoughts on “There’s a reason we lock our gate”