Some time back, my older brother and his wife generously passed on items to me that used to belong to my brother’s late MIL.  Among them were outdoor LED Christmas lights, and a timer.  Today… er… (glances at the time)… yesterday, I took them out to add to the stings of white lights we already have at the fence line near the gate.

I had two areas I was considering to put the timer.  One was in the garage, where the main power cord is plugged in.  I figured, if I were able to get the timer to sit at the window, I could set it to turn on from dusk until dawn.

Turns out, I can’t do that.

The timer’s plug in area is slightly recessed and rectangular in shape.  The power cord’s plug is round and rather large.  It doesn’t fit into the space.

The other possibility was to put it between the new strings of lights and the set of white lights I was adding them on to. This way, the white lights would be on all the time, while the Christmas ones would only turn on at night.  I even had a clear plastic bag to put over the timer to protect it from the elements, while still allowing the sensor to detect light levels.

Nope.  I could plug a string of lights into the timer, but the timer’s plug has three prongs, and the light strings can only accept two prong plugs.

So I just added them on, as is.

It turned out to be 4 strings of lights in total, already plugged into each other.  Which was just fine by me!  I strung them out and affixed them to the barbed wire with zip ties.  Though they had power running to them, there was too much sunlight for me to see how they looked. I waited until dark to go back and see them, since there’s too much brush in the way for us to see them from the house. 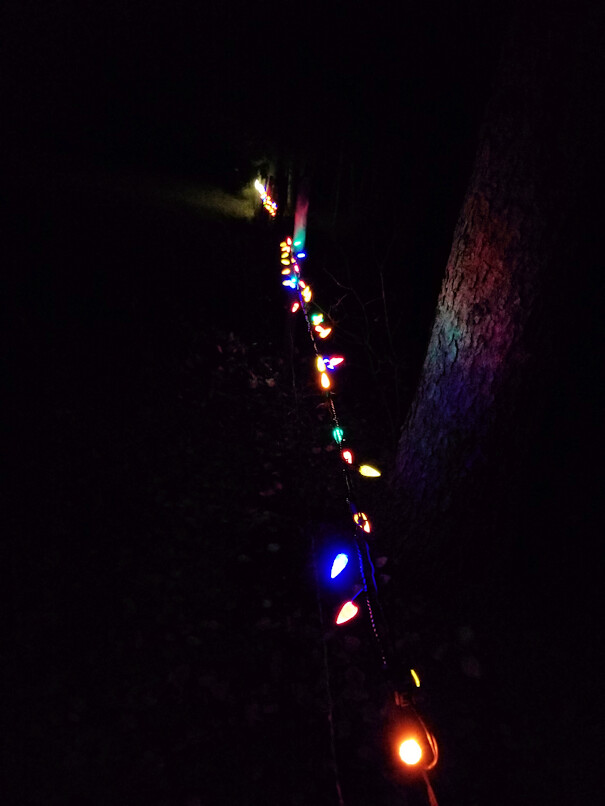 So… they look just fine…

Except for the gap. 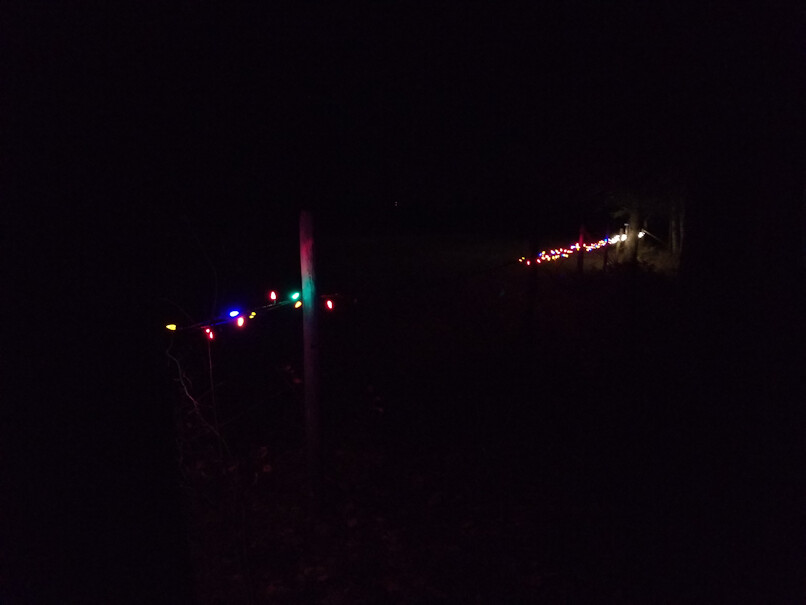 I did test these in the house a few days ago, when I was deciding what to do with them.  They were all working fine.  I was all set to put them up in the sun room and had even started to unroll the bundle a bit, before I realized I didn’t have a way to affix them the way I had in mind.  Finding an entire string of lights out was a bit of a surprise!  Checking it out with a flashlight, I could see nothing to tell me why it wasn’t lit.

So I’ll be going back tomorrow with something to cut the zip ties, and remove the string that’s not lit up.

I was rather impressed by how much the white ones light up the area around them.  I definitely want to pick up more of those, when I can.

Yeah, I know, it’s not even Halloween yet, so it’s early for Christmas lights.  I figure, better to get them up now, before the snow arrives to stay.  🙂