The outside cats are certainly entertaining.

First, they tried to kill my husband this morning.  !!!  As he went out to feed them this morning, they were all at the door.  The usual tripping hazard!  As he started to step down from the concrete stairs at the door, Doom Guy dashed under his foot.  He moved to avoid stepping on him, and ended up stepping on one of the glazed bricks that are along the side of the entryway.

Thankfully, he was not injured.

Later, I walked around the property, taking photos of the house and outbuildings from various angles, for the insurance. The property insurance is woefully inadequate, and my older brother is hoping he found a company that will be able to do better. This place has, apparently, been very hard to insure. Especially when no one was living here. Anyhow. While walking around, I was followed by kits and cats, and even got to carry Butterscotch around. 🙂

Then, later on, I got to see this, outside our kitchen window. 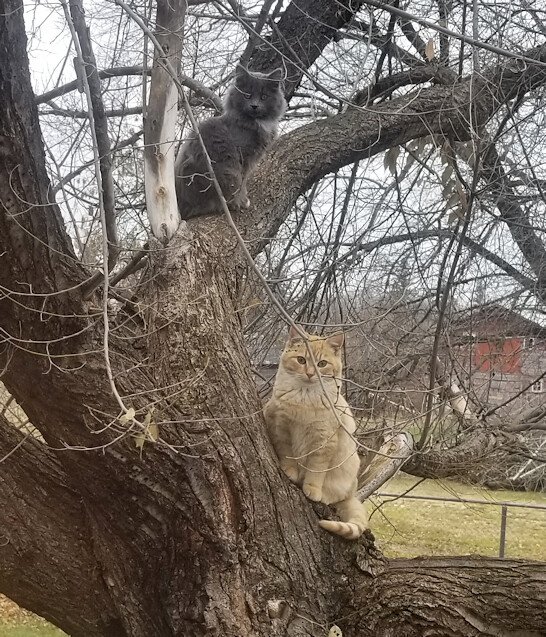 I’m so pleased to see how well The Outsider has been getting along with our own litters. We still have no idea where he came from, but he no longer leaves. Based on that, I’m thinking he may have been dumped. 😦 Impossible to know for sure, though.

Though we got 4 big bags of cat kibble at our last Costco shop, we’ve been going through it with remarkable speed. We’re not going to be doing the big shop until probably the 1st, given our current calendar, and we were going to be out by tomorrow. So when the opportunity arose, the girls and I went into town to quickly pick some up, along with a few other things, before the grocery store closed.

When we got back, the cats were running all around us as we carried things in. Their food bowls were empty, so I grabbed the big bag of kibble, then went into the Old Kitchen to refill the 5 gallon bucket we now use for it. It wasn’t quite bit enough to fit all the kibble (maybe that’s part of the issue; the Costco brand we usually pick up is a slightly smaller size than the ones we pick up elsewhere), so I went to use what remained to fill the food bowls.

The kits may have been outside, running around the girls’ feet, but one of the dad cats – the black and white one – was on the swing bench in the sun room! He ran off as soon as I opened the doors.

I suspect he may be deaf. I’ve come out to find him at a food bowl and spoken to him, with no response until he made visual contact with me, at which point, he runs off. My husband noticed he seems to have an injured front paw, though he ran out so fast, I couldn’t tell.

When I put the kibble out, I spread it out between 3 containers, instead of the 2 we usually use. The cats were in heaven! For a while, they were all at one of them. My younger daughter tried to come closer, and the shier ones went to the other bowls. She did, however, get to touch some kitties! 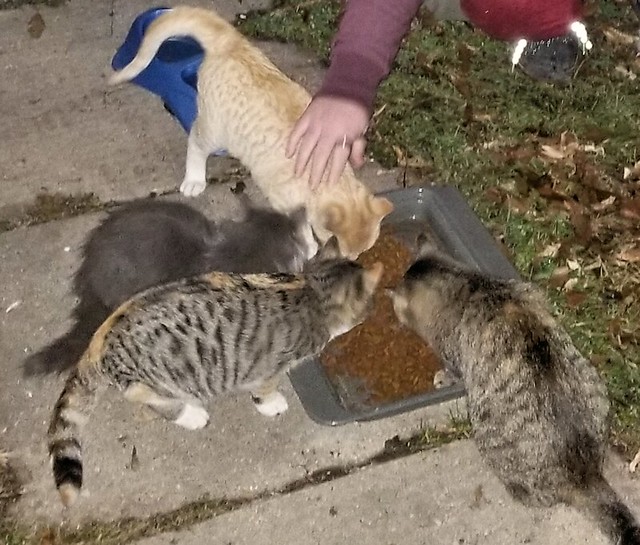 That’s Bob she’s petting in the photo.  He has been letting her actually pet him, these days.  The Outsider let her kinda-sorta pet him.  He would back off once he realized he was being touched, look at her, then go back to the foot.

She even got to touch Rosencrantz or Guildenstern!  Which basically never happens.

Little by little, we’ll get them used to us!