I admit to substantial hesitation before writing this post.  But since I’ve already posted about the vandalism to our locks, I suppose it doesn’t make much difference.  Plus, this blog was intended to be about all of the things we are discovering and dealing with as we take care of the farm for my mother, and… well, this is part of it.

This is the latest vandalism we have found.

In this case, we cannot give as close a time frame for when it happened, as we can with the glue in the locks.  We simply don’t have much need to go to the barn.  It’s mostly junk in there, anyhow – anything of value was taken before we moved here.  The last time we went through the barn was on Sept. 7, when my cousin from Poland came for a visit, and we went through the barn, rather than through the electric fence.  It wasn’t until I went around to take photos (on Oct. 27) of buildings for insurance purposes that we can see the vandalism on the barn.  I didn’t even notice it at the time, since I did go under the electric fence wire instead of through the barn, to get photos of it from the other side. 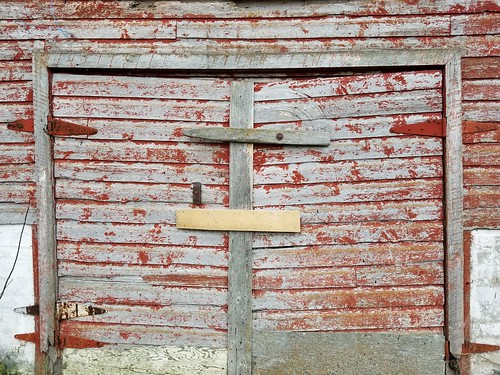 These are the main doors to the barn.

There are 10 screws holding that board in place. 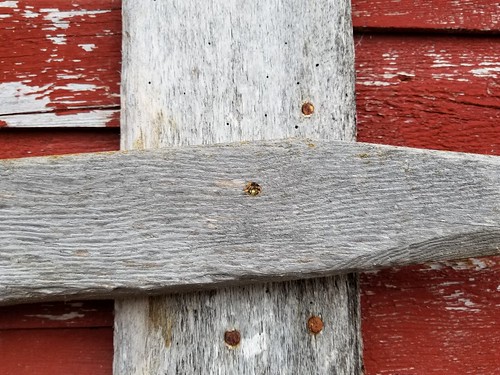 There is the same set up on the lean-to door, except it has only one door, not two.  Here, you can see a single screw has been drilled in.

I walked around the barn to check it, and the other doors don’t look tampered with.  These are the only two doors that can be opened from the outside.  Having said that, I am think I need to go back while there is still light, and look for screws that might be less visible.

When we went to undo the damage, we opened the lean-to door, first.  That gave us access to the inside.  It wasn’t until we started working on the board across the double doors that we realized that the pivot board was also screwed in place with a single screw as well.

While the last of the screws on the board were being loosened, I went in through the lean-to to see if anything seemed out of place.

When I got to the inside of the main doors, my daughter was still struggling with it.  The board was loose, but the still doors wouldn’t open.  I tried to help from the inside, but clearly, there had to be another screw.

It took a while, but she finally found it. 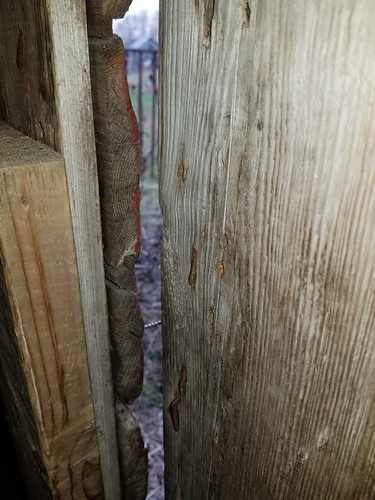 Can you see it?  It was drilled so deep into the wood, the threads were completely beyond the wood of the first door.  It could only be seen by peaking through the hole, and it was even at a bit of an angle, making it difficult to get the screwdriver into the screw head. 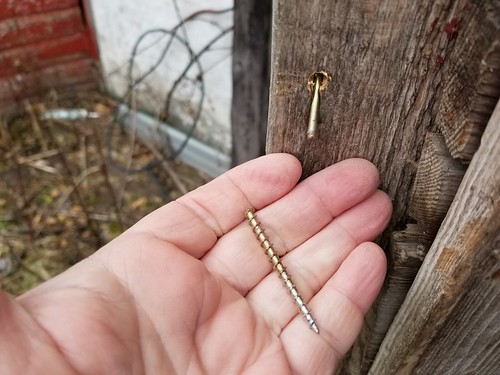 When it was finally unscrewed from the second door, there was no way to get the screw out of the hole, so I ended up breaking it.  Then I hammered down what was left sticking out, so that the door could be closed again.

It was while I was doing this that the sound of someone driving by on the road caught my attention.  Looking through the trees, a small blue car – a familiar looking one – had slowed down to a near stop.  When I looked up at it, it took off.  The driver would have been able to see me, with both sets of barn doors open, though the trees. 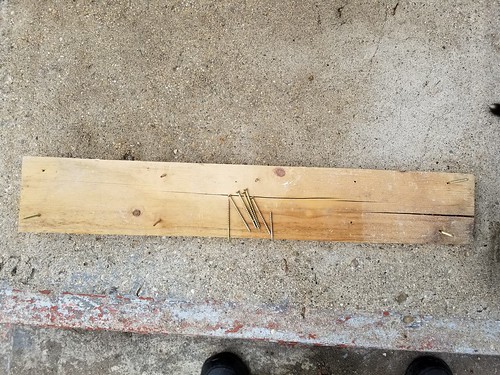 Here is the board, with some screws still in it, plus the screws that got taken out completely.  Even the broken off piece.

Judging from the very slight weathering, this was done recently, but definitely more than a week ago.  It was likely done at the same time the locks were glued, or sometime near then.

With the fences being barbed wire, the gates serve only to stop vehicles from coming in.  The fences can’t keep people out.  It would be easy for a person on foot to get in.

So what this means is that someone came onto the property, with a board, a cordless drill and a pocket full of screws (possibly a bottle of glue, as well).  If they came through at night, probably a head lamp, too.  They screwed the main doors together with one screw, the pivot bar with another, then the board with another 10 screws.  Then screwed the pivot bar on the lean-to door as well, for 13 screws in total.

This took planning and effort.

I tried to phone the RCMP to update our police report with this additional vandalism, but never got through.  I will have to try again very early tomorrow.

Meanwhile, I’m going to go through my photos to see if I have any with the barn in the background, to see if I can narrow the time frame down further.

Of all the issues we thought we would have to deal with after moving here, this is definitely not one of them.