The hard part about making plans is, they get disrupted so quickly! 😀  Even scheduled appointments and the like often get changed at the last minute.  Even the medical appointment we had for my husband this morning was one that had been rescheduled twice before – and that turned out unusual.

This morning, I got to put food and warm water out for the outside cats.  My husband has been doing it by going through the main entry, so I think I confused them by coming through the Old Kitchen. 😀

They were very excited to see me! 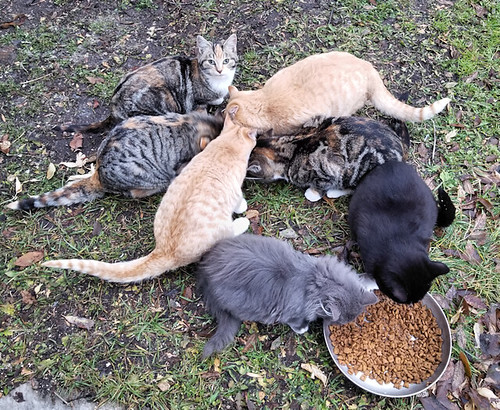 I not only got to pet Butterscotch and Doom Guy, but The Outsider let me pet him – as did Rosencrantz (or Guildenstern) a bit!  They are the shiest ones of all.  Even Bob let me pet him.

Still no sign of Corvo.  Beep Beep did come by after I took the photo.  Then I did my rounds, which included going to the barn, after noticing during the night that I’d forgotten to turn the light off.  Our rounds are now going to have to include the outbuildings, I guess.

Hmm.  I should probably check the storage shed to see if it’s been tampered with, too.

At least we can pretty sure that no vandalism will happen once there’s snow on the ground, since that would leave visible tracks.

Then I called the RCMP a few minutes after their opening office hours.  The woman who answered was still booting up her computer.  It was a good thing I did get through today, as it turns out my call about the second lock being glued didn’t get added to the first report.  With the barn, because I could not be sure of it happening on the same date (though after going through photos where the barn could be seen in the background, I was at least able to narrow it down a bit more), a second file was started.   So that is now done.  The woman remembered me from when I came in in person, and as we were talking, she suggested getting a camera facing the barn, then immediately added, “but you shouldn’t have to do that!”  Too true!

Then it was off to town for my husband’s appointment.  We left early so he could get come blood work done.  I had some errands to do, so I dropped him off.  Normally, I can finish any errands and be back and in the waiting room before he’d done, but his appointment ended much earlier.  While he was waiting, though, there was a commotion during what he was told was a “fire drill.”  Where everyone was put into a single waiting area, the staff stayed at their posts, and the doors were closed up.  Sounds a lot more like a lock down than a fire drill!

No idea what was really going on, though.

But I didn’t mind an early pick up.  It meant we could hit a restaurant before the lunch time crowd (well… as crowded as things get when it’s no longer tourist season!) for a date. 😀

After we got home, the plan was to do prep and clean up for a family dinner we have planned for this weekend.  Which was originally scheduled for the weekend after Thanksgiving. 😀  Being our monthly payday, we normally would have done the big Costco shop, but with the medical appointment in the morning, and the dinner coming up, we were going to wait until after the weekend.

Well, that changed, too.  The girls and I ended up going into the city for the Costco shop, after all!  I feel much better, having that over and done with!

The trip home was certainly interesting.  At one point, we passed a few deer in a field.  Then I happened to glance over to a small field on the other side of the road, where we saw at least a dozen deer, grazing!

It’s a good thing we have deer screamers on the van now.

During both the drive in and the drive out, we were seeing lots of Canada Geese around, including all over someone’s lawn in the city!  On the way back, shortly after leaving the city limits, we were seeing fields covered with Canada Geese.  To be expected for this time of year, though we’d never seen quite so many.

Then we started coming up on dark clouds of birds, wheeling through the air.  There were so many, we couldn’t figure out what they were at first.  Then we got closer and realized, they were more Canada Geese!  There had to be over a thousand of them!  At one point, we drive past a penitentiary on a hill, and they were circling around it.  Much to our surprise they actually started to land inside the penitentiary walls!  What a sight that was!

By the time we got home, it was completely dark.  I really appreciate those lights on the fence.  I remember from last year, how much harder it was to pick out the driveway in the dark, without them.

On the to-do list for tomorrow; I found something I could stick into the ground at each end of the culvert.  I should be able to use them as holders for the high-viz orange tubes that are leaning by the gate.  Those will be much appreciated, once the snow is deep enough to fill the ditch on either side.

As we came up to the gate, we could see what we thought was Doom Guy, crossing to the garage in the distance.

It was the skunk, going into the garage, where I’d left some lights on, knowing it would be dark before we came back.

I’m pretty sure he was gone by the time we unloaded the van by the house, and I parked in the garage.  Just in case, though, I didn’t close the door all the way. 😀

So that is done.  We didn’t make any of our usual stops at Walmart or whatever, where we would normally pick up the things we don’t want to get in bulk, so we will still need to make at least one trip into town to get everything we need.  (And finally pick up the set of locks I have been meaning to get.) Then we will be set for the month!

Over the  next couple days, we’ll be cleaning up and prepping for more than the family dinner.  Once that’s done, the girls and I plan to haul up the Christmas tree and decorations.  We didn’t get it up last year, but this year, we have both the time and the space to do some decorating.  In the past, we’ve put the tree up and left it undecorated, to get the cats used to it being there.   They tend not to bother the tree, but you never know!

But, we have to survive hosting our first family dinner since the move…

That should be interesting! 😀

2 thoughts on “Plans? What are those?”