What a long day today – and it’s not even 6pm as I write this!

The girls and I planned to head out early to the city, which meant I was out earlier than usual to do my rounds.  The outside cats did not seem to appreciate me coming out so early to feed them! 😀 The sun wasn’t even up yet, but what a beautiful sky! 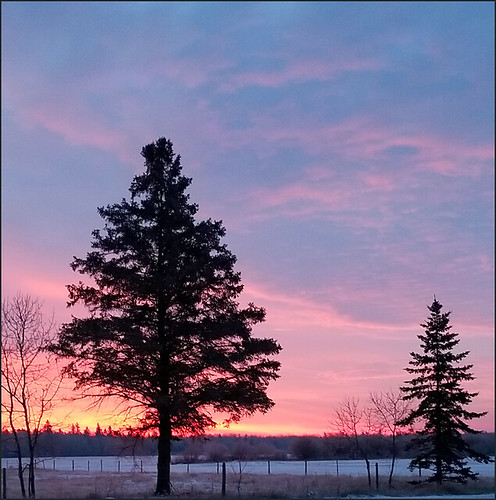 The colours were amazing.  (I did have to play with the photo a bit in post-processing, to get it to better match reality.)

Which turned out… interesting.

We were behind two people who were… boistrous? shall we say?  The guy went back and forth in line a few times, and they were very cheerfully… hmm.  Distracting to the staff, is the best I could put it.  Then, one of the kitchen staff called out the guy, telling him not to eat food straight off the buffet, and that they had to pay for the food before eating it.  He said that he was going to pay for it.  It turned out he’d grabbed some extra sausages, then ate one of them while doing his back and forthing.

Once we had our stuff, one of girls went to grab a table while the other stayed with me while we waited to pay.  We had quite a bit of a wait behind these two who, on the one hand, were very cheerful and commenting on what a great price it was for the amount of food they got, and on the other, demanding to see a manager.

They ended up sitting at a table next to us, which meant we could hear them talking to the two managers that ended up coming over.  The woman complained about the staff member calling them out from behind the counter, embarrassing them, over his eating the sausage before paying for it.  I’m sure half the restaurant could hear them as they related this.  It went on long enough that I finished eating, then went to return my tray.  As I was leaving the tray area, one of the managers went by and was about to go behind the counter, but I caught her attention.  She was on the phone and quickly asked me to wait a bit, and stayed until she finished her call.  Which is how I ended up hearing her tell someone on the other end of the phone to have a $40 gift card ready for this couple.  When she was done on the phone and turned her attention to me, I told her we were behind these two, described what we heard and saw, and told her that the employee did the right thing by calling them out.  Yeah, it would have been embarrassing, but there is no polite way to call them out on it, and they should not have been doing what they did.  It’s not like the guy took a hash brown off his breakfast platter, which has a set price.  The manager thanked me for passing on my viewpoint since, of course, they only had the customer’s viewpoint, which was quite the rant.  I’ve worked retail.  I’ve seen this before.  It’s a bit like someone “sampling” the produce on the floor, but I have also had customers try to do the distraction thing, as a way to slip something past me as a cashier.  I’ve witnessed similar in other places, and it’s the sort of thing we get warned about in staff training.  It may be that they were indeed intending to pay for anything they ate before getting to the cashier, but it’s just as likely they would have eaten more if the employee hadn’t called them on it, then not said anything to the cashier when they went to pay for it for their meals.  The cashier certainly would not have seen it from where she was.

As we were leaving, my daughters saw them again, volubly looking for the returns and exchanges, near the exit.  Which is interesting, since they did not have any products or bags with them at the restaurant.  Or maybe that was where they were supposed to pick up the gift card the manager arranged for them.  Having worked retail as long as I have, they set my scammer radar off, in spades.

As for our shopping, I didn’t find what I was looking for.  I wasn’t even looking for a specific item; more like a category of item, and I know they’ve had stuff that would have fit the bill in the past, so I figured they’d have a more recent version by now.

So our next stop was going to be a nearby Costco.

We drove into the parking lot, then drove right out again.  It was completely full!  Instead, we went to a nearby Walmart, and had better luck there.  Not what I had originally intended, but I did get some gifts, and the groceries we were intending to get at Costco.  My shopping list before Christmas is almost complete, but my goodness, it’s been hard to fill!  And we very deliberately go minimalist when it comes to buying gifts.  Even simple stocking stuffers has been hard to find.  Ah, well.

While it wasn’t as productive trip as I had hoped, it was certainly not a wasted trip, either.  Best of all, we were done early enough to be heading home before it got dark.  In the last leg of the drive home, we got to see the most amazing sunset.

As much as I could adjust it to match the colours, the photo does not do it justice.  It was like the sky was on fire – except pink!

Now it’s time to settle in, and be glad to not go into the city again for a while!  We just have plans to visit family before Christmas.

I’m going to enjoy being a hermit until then. 🙂