This morning, I started working on making an Alaska Sourdough starter, based on the book.  The recipe calls for “rich potato water”, flour and sugar, with optional yeast.  After making hotcakes this morning, I didn’t feed the starter, as I normally would.  The container needed to be cleaned out (the lid was becoming glued to the top!), so I decided to use the remaining starter as the “yeast” portion.

“Rich potato water” is made up of potatos, boiled in their peels, until they begin to fall apart.  The peels are then taken out (they come off easily at that point), and the potato mashed into enough of the cooking water to make 2 cups.

I scrubbed 2 small potatoes for this, then mashed them with their water in my 8 cup measuring cup.  This is what it looked like at that point. 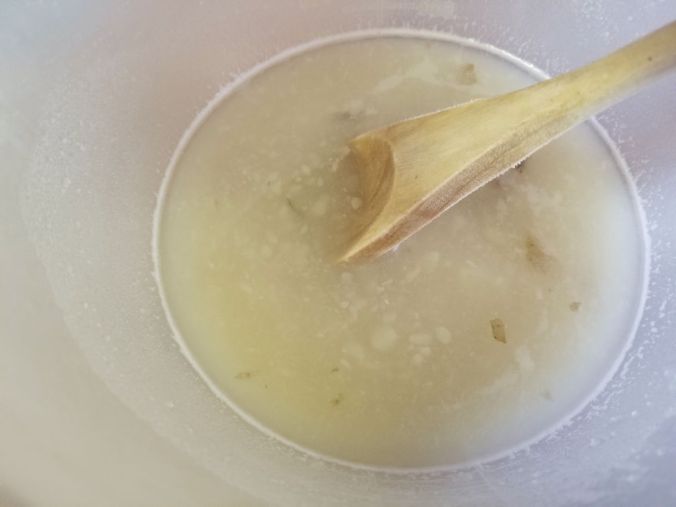 Yeah, there are still bits of peel in there.

The water was still boiling hot, though, so I gave it time to cool before I added the flour and sugar.

Once I started mixing in the flour, though, I quickly realized that 1) I think I accidentally added 2 cups of flour instead of one – either that, or the potato water was much thicker than I expected, and 2) there was no way that my sourdough starter container would be big enough.

So I transferred the resulting dough into my big Tupperware Thatsa Bowl, added what was left of the original starter, then a bit more of the water left in the pot from cooking the potatoes to get it to the right consistency. Once mixed, I covered it and my daughter and I headed out to town to run errands – and play a bit of Pokemon Go (got some new ones for the Pokedex!).

After several hours, this is what it looked like. 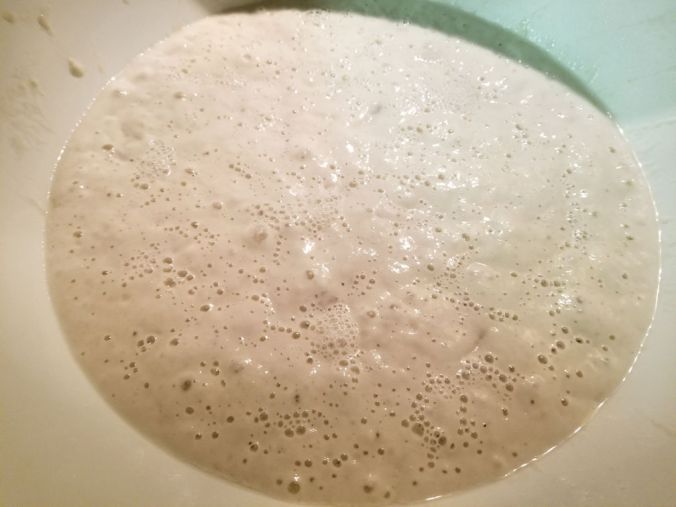 There’s some major action happening there! 😀

I later put the entire bowl into the oven, which was still warm from using it to make supper.  There it will stay for the night, with the oven light on to keep it warm.  The bowl is big enough that I don’t have to worry about it overflowing.

Sir Sour Alot is now officially transformed into a potato based Alaska Sourdough.

Technically, I should wait at least 3 days before using it, but I plan to make more hotcakes tomorrow morning.  Then I can transfer the remaining started back into the cleaned out container it belongs in.

I can hardly wait!

4 thoughts on “The Transformation of Sir Sour Alot”