So this has been a productive day!  Most of my to-do list for outside is now complete.  The last thing is to do a dump run, which will be taken care of soon.

Beep Beep made things a little more difficult. 😀  As I was getting my supplies out of the sun room, I paused to respond to a message on my phone. 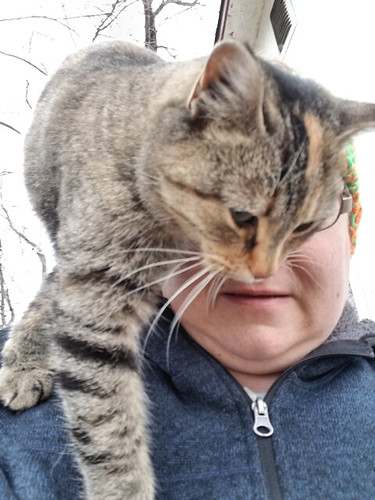 She did it again, while I was working in the garage, too.

What a girl! LOL

The first thing on my list was to use some metal rods I found while cleaning up at the garage recently, to set up markers at our driveway. 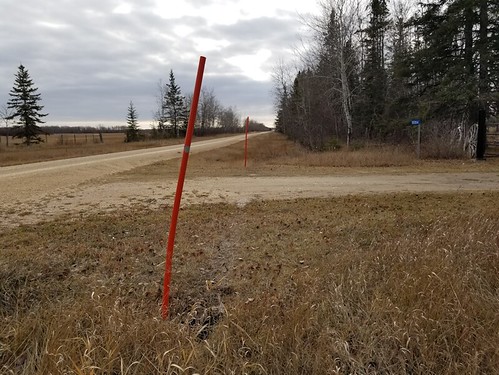 I don’t know how well they will hold out over the winter.  We shall see.  The main thing is, once the ditches are filled with snow, we’ll be able to see the outer extremes of the driveway.  One of them has some reflective tape on it.  I’ll have to remember to pick up more.  There are a few places where we want to add reflective tape.

Once that was done, I reclaimed our wheelbarrow from the junk pile; an old, cracked rain barrel is now being used to hold things like broke glass and other small things that we didn’t want to just throw on the pile.  Then I took the plastic I’d used to put water in an old bathtub for the cows to cover the whole thing (and added the bathtub to the pile, too).  I tossed some stuff to weigh down the plastic, but I rather doubt it will stay.  We shall see.

The next thing I wanted to do was cover the post pounder.  First, however, I wanted to try pumping up the tires, to see if I could move it.  In order to access the compressor, however, I had to finish cleaning up and putting away stuff we had to clear so we could rescue Doom Guy.

Beep Beep “helped” by jumping up onto the counter, then onto me!

I found a little hand broom and swept off the counter, then had to figure out how to put the shelves, back, without a second person.  In the end, I took the drawers out of the top one, to lighten it.

This is why it was so heavy. 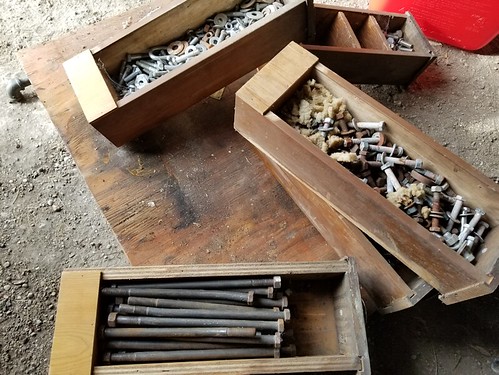 The one drawer with the long bolts probably weighed about 15 pounds, all on its own… and it got stuck.  I managed to get it out, though, which made moving that shelf easy enough.

Then I went to clean off the second shelf before trying to remove the drawers.

I don’t know how I failed to notice this, when we first took it off.  Probably because we were too distracted by the need to free Doom Guy from behind the counter. 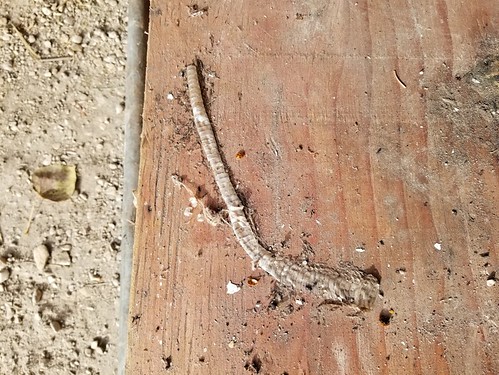 With this shelf, I wasn’t able to take any of the drawers out, but it was light enough I could just pick it up and put it on top of the other one.

Then I set up the compressor which, thankfully, has a hose long enough to reach both tires on the post pounder.

The first one, much to my surprise, pumped up rather well, and seems to be holding air. 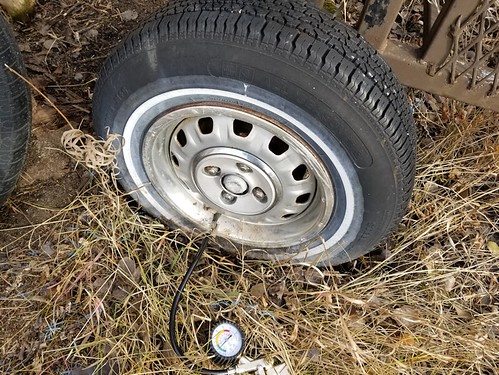 Cool!  Now, if the other one would hold air, it might be possible to move the post pounder into a shed or something.

It pumped up, all right, but as soon as I turned the air off, it quickly deflated.  I could even feel a breeze on my hand! 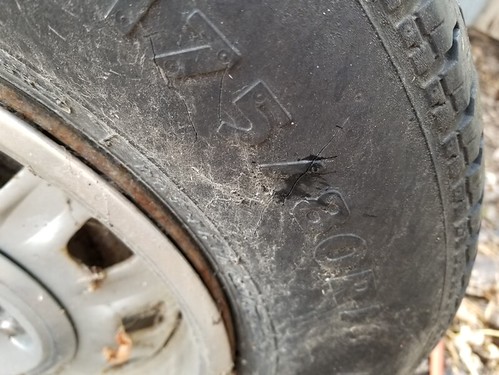 A big ole crack in the tire!

I had noticed a tarp in the side of the garage my mother’s car is stored in and was happy to confirm it was big enough to cover the whole thing. 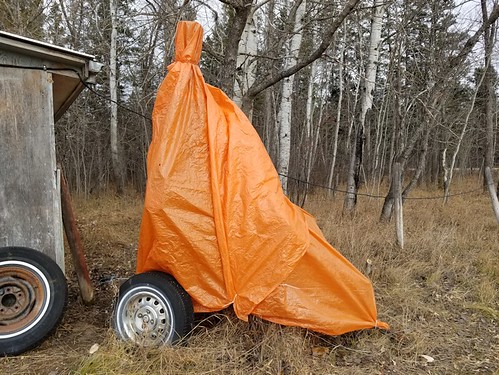 I don’t know what was used to fasten the old tarp – if anything – but I’m hoping that this one will stay.  Between the bale twin at the top (which is what had been tied around the folded up tarp, and the zip ties, it’s pretty secure.  I just wish I didn’t have to poke little holes into the tarp to thread the zip ties through. 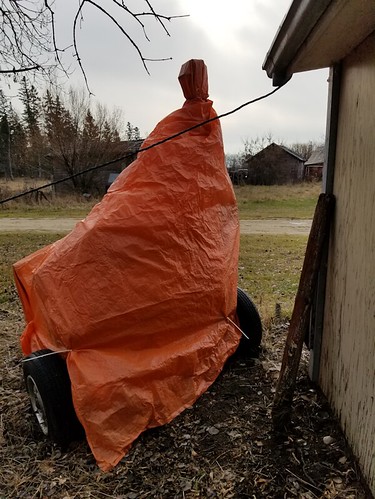 It should hold for a while, though.  It would take some pretty major winds to tear it off, at this point.

That done, I moved the toilet “art”.  I decided to leave it near the outhouse for now.  I think I really will put dirt in it and plant flowers next year.  Just for a joke!

Then I took the oil drum that was along the garage and set it up as a temporary burn barrel. 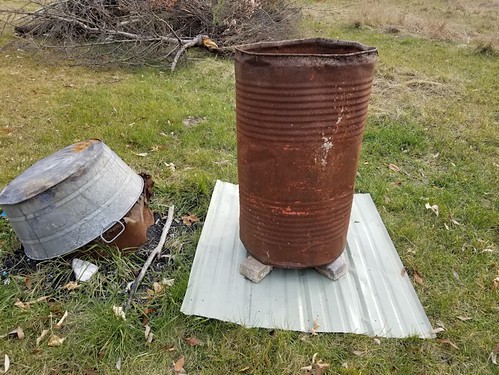 Here it is, next to the remains of the old one.  It’s not in very good shape, but until we can chisel off the top of the other barrel we found by a collapsing log building, it will do.  I didn’t have to make drainage holes in the bottom.  It already had holes.

And now it’s time to move on to the other things on the to-do list. 🙂