Well, I’m certainly glad I finished the outside stuff, yesterday!  Especially wrapping up the post pounder. 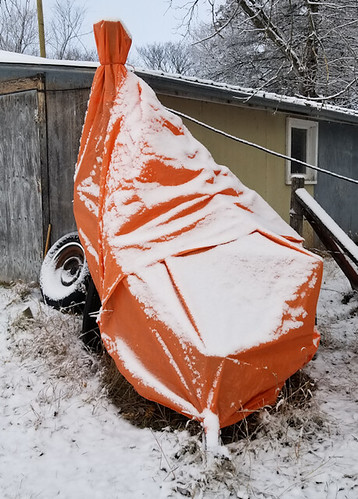 I suppose it’s really a moot point, considering how many years it’s been exposed to the elements, but at least it’s not going to get worse as quickly. 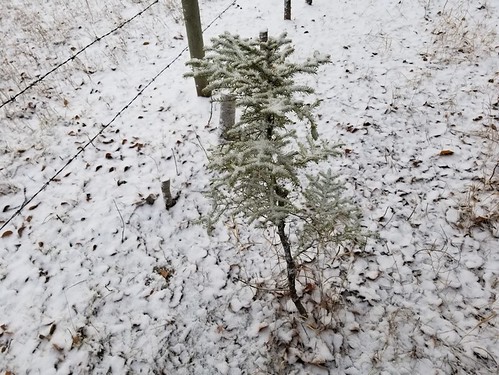 While walking along the spruce grove, I couldn’t resist getting a photo of the spindly little spruce tree.  I do hope it survives. 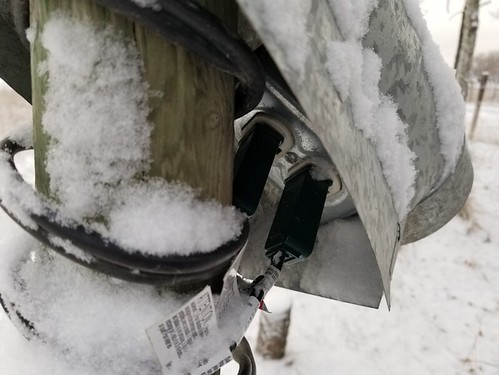 The cover for the outlet has done its job.  Some snow did get blown under but not enough to be a concern. Of course, I’ll still be checking it, regularly! 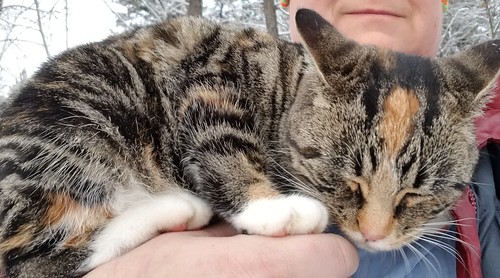 Just look at that face!!!

Butterscotch was my escort this morning.  She certainly enjoyed when I could pick her up out of the snow and carry her!  She would settle on my arm like this, and start licking my thumb and finger, in between rubbing her face all over mine.

Beep Beep also followed along, and while I was paused to take the above photo, she decided to climb up my back!  The next thing I knew, I had Butterscotch looking over my shoulder at Beep Beep, near the top of my back, and they were growling at each other!!

Beep Beep backed off and jumped down.

Something I noticed when Beep Beep caught up to us.  This was near an area with much heavier underbrush, that she came through.  There was a distinctive thrumming noise as a grouse flew off.  It happened two more times, while I was out there this morning!  This is now the third day I’ve heard grouse flying out of this area.  It looks like they’ve found some decent shelter in there.  I hope that means they’ll stay through the winter.

Things like that are why I don’t plan to remove ALL of the underbrush, when we finish cleaning out the spruce grove. 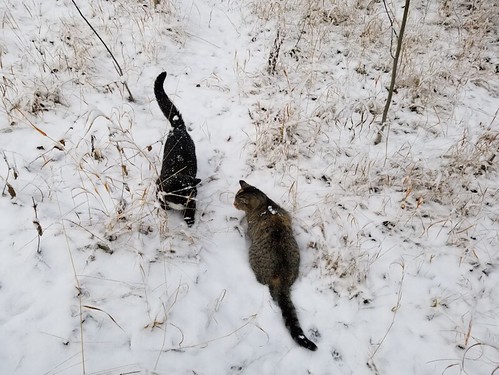 Even Doom Guy came out to join me!

Then – unsuccessfully – tried to climb up the back of my leg. 😀

There’s a pretty good chance this snow is hear to stay.  We’re supposed to warm up to 3C on Sunday, but that’s the warmest we’re supposed to get within the next two weeks.

Which I don’t mind.  It’s looking beautiful out there, and we’re all settled, warm and cozy, ready for the winter.