Heading into the sun room this morning, on the way to putting food out for the cats, I discovered not one, but two of the dad cats, running out of the room with the kittens!  The black and white one was back on the dresser.  I just caught a flash of the grey and white one, as he ran out the door.

They quickly took off out of sight, but that still left 8 cats to crowd around the food bowls! 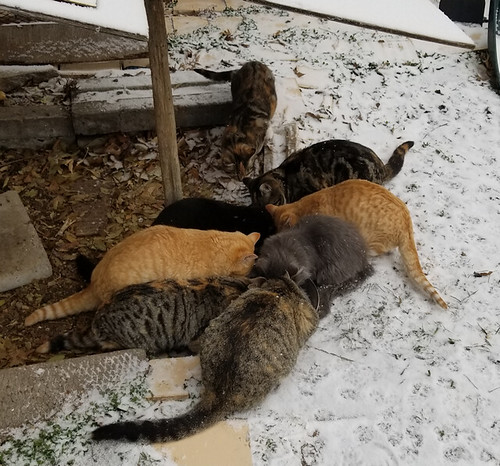 Guildenstern (or Rosencrantz) had to push her way in – which she clearly didn’t want to do.  Neither of the calico-torties are very assertive, at all.

Beep Beep was my escort this morning, though I was joined by Rolando Moon, later on, too. 🙂

We had some blustery weather overnight, judging from the branches I was picking up this morning.

When finishing up my rounds, I got a chuckle at the many tiny paw prints in the fresh snow on the sidewalk to the main entry. 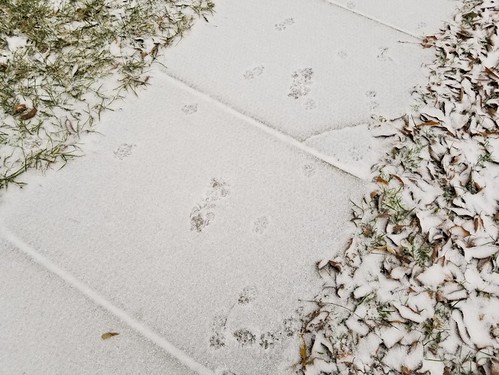 From the size of some of them, I could see we got visited by my brother’s dog again, too! 😀

As I came around back to the feeding area, I saw the third dad cat, slink away.  I’d seen him earlier, going through the maple grove and then through the tall grass in the main garden area.  It was my presence that had him moving away from the house, so I was glad to see he’d come back, while I was doing my rounds. 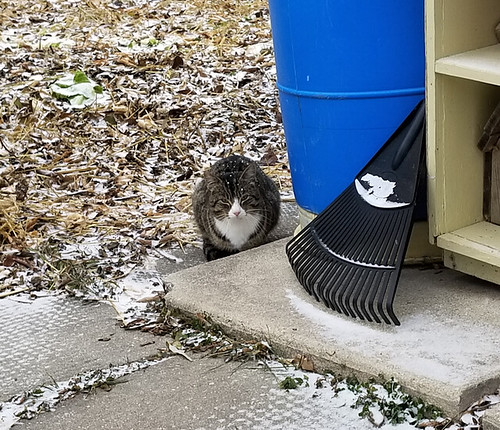 He let me get within about 8 feet of him, as I made my way back to the sun room doors to go inside, before finally slinking away.

Of the three dad cats, this one looks the most like a house cat.  He’s in good shape and, while certainly not willing to go near us, doesn’t demonstrate actual fear or anxiety in the process.  I wonder if he belongs to one of the neighbouring farms, and is just coming to visit?

Inside the sun room, I found Bob, already back on the swing bench. 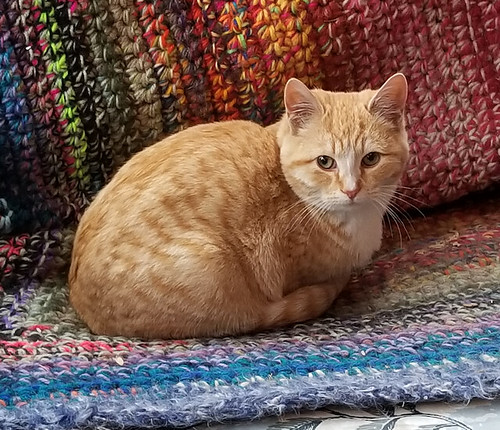 Just look at that beauty!  No longer the skinny, scrawny little kitten with a head too big for his body!

He even let me touch him, though he wasn’t too happy with me coming close.  Even Doom Guy was more jumpy around me than usual.  I think it was because of the heavier coat I was wearing today.  The fabric of the outer shell makes a lot more noise. *L*

Bob, however, not only let me sidle up to him and touch him, he let me scritch his ears and cheeks!  Not only that, but even as tense as he was, he started to purr and relax a bit.  Until Doom Guy came over and disturbed him. 😀

Then I saw a bit of movement out the window, so I snuck over to the door to take a peek. 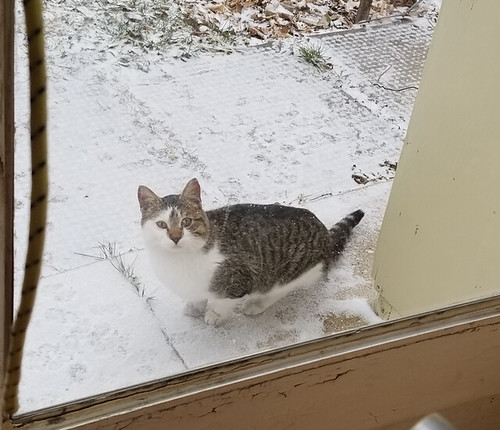 Look who peeked back!

He moved away after I took the photo, but I went inside the house after this, so I hope he came back for food soon after.