When I went into the sun room to give the cats their food and water, I found this. 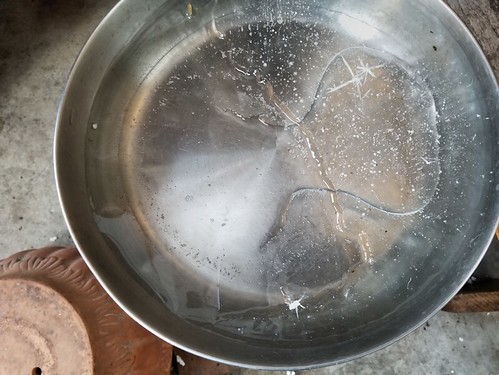 I thought, for a moment, that the light bulb might have burnt out, but nope.  It got cold enough outside that the water on the heat started to freeze.  There was still liquid water, but you could see that, as the cats drank, the water level dropped after it started to freeze, creating that bubble under the ice.  Which means that the cats did still have water to drink, at least.

I had to stop using the plastic dog bowl I was using for water outside.  The plastic has started to crack in the cold, so I can’t give it a twist, like an ice cube tray, or bang it on the wooden rail, like I do with the metal bowl.

I had topped up the kibble last night and there was plenty left, but they were still eager for new kibble.  The stuff I’d left out last night was frozen!  It’s dry cat food, so there’s almost no moisture in the kibble itself, but I guess there’s still enough there for it to freeze and make it harder for them to eat.

This morning, my rounds outside included stopping in the garage to check the van, plug it in, top of the wiper fluid with winter fluid, and topping up the coolant as well.  We have no plans to go anywhere with the van today, but who knows.  We’ve been out a fair bit, so I’m enjoying staying home right now.

A few days back, my daughter and I went into town and, as usual, took advantage of the trip to play a bit of Pokemon Go.  Our route includes parking next to a gym in the game that’s located by the lake.

There was a guy spinning around in his car on the ice.  I really didn’t think the ice would be thick enough to drive on, yet, but it’s shallow enough near the beach, that this area was solid.

Then he got stuck.

After watching him try and get going for a while, including opening his door and trying to push while driving, we decided to walk over and help push.

I guess he saw us, because he intensified his efforts, getting back into his car and doing a whole lot of back-and-forthing, until he finally got unstuck before we reached him.

Then he left the ice, completely avoiding looking at us as he drove past us.  Half a minute later, we could hear him spinning out on the road.

What could we do, but shake our heads and laugh!

While walking back to the beach, I took this photo of the ice. 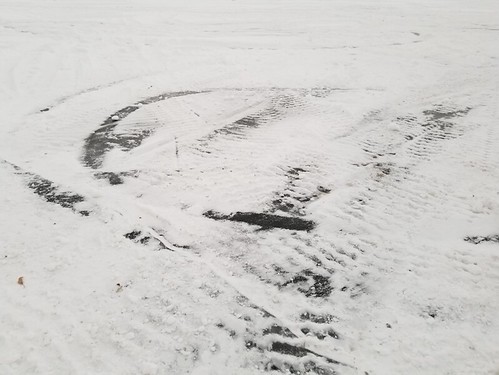 You can see some of the tire tacks, but also a huge crack in the ice.  Because this lake is big enough to have a tide, yet shallow enough to freeze over completely, cracks like this appear, no matter how thick the ice gets.

Where this photo was taken, within feet of the beach, I’m pretty sure the ice reached all the way to the bottom.

Our visiting deer, meanwhile, seem to be ready for the cold. 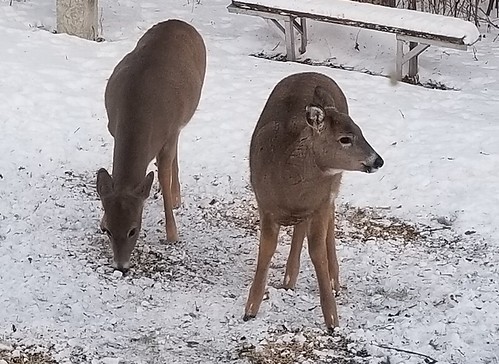 Check out that thick, thick fur!

These two are now regulars.  The littler one on the right (I’m guessing this is a mother and son pair) comes running up to the feeding station, all bouncy and eager!  He is a joy to behold.  The doe is much more cautious and attentive.

I haven’t been at the computer much to post what’s going on, lately.  The girls and I made a trip into the city a couple of days ago.  This was supposed to be our last trip into the city until after Christmas, so we left early and planned to go to a number of places.

It was decidedly non productive.

Sure, we got a few groceries, thinking ahead to Christmas dinner, but not everything I hoped to get.  We were also looking to get some new garlands and look for gifts.

At this time last year, the movers hadn’t even brought our stuff yet, and we were focused on getting as much of my parents’ stuff out of the house as we could before our stuff arrived.  We dropped almost all of our traditional Christmas activities, so I can’t compare between this year and last, to know if what we saw has become the norm, or if it’s just local, or what.  Before the move, when we went into stores before Christmas, we would see huge sections of Christmas decorations, supplies, gift ideas, and more.  We would have entire aisles of just garlands to choose from (are garlands “out” now?), and large sections just for replacement bulbs of all kinds.

We went to two Walmarts, two Canadian Tire’s, a Winners Homesence and a Superstore.  The girls went to a Toys R Us (we still have those in Canada), and I went to a Dollar Tree.  Oh, and a Micheal’s, and what I got there wasn’t something I needed for Christmas.

In all the stores, the seasonal sections were much smaller than expected, and there were even fewer gift sections.  Since we’ve already been finding the normal sections decidedly lacking (I’m remembering how many stores I had to go to, just to find underwear for my husband!!), that meant even among the non-seasonal stuff, there was little to choose from.  And these are large stores, I’m talking about, too.  I could understand if they were smaller buildings, but these are supercentre type places.

By the time we stopped in a mall for a late lunch, all three of us had to pain killer up.  It was such an exhausting, frustrating trip.  We’re going to have to make another trip into the city before Christmas, but I honestly don’t know where else to go to find what I’m looking for.  I’d normally be able to find what I’m after at a Walmart.  So now I’m wondering, do the stores in this province just suck in general, or is this the result of our failing economy, and country wide?  It’s certainly gone down hill a lot, since we lived here almost 15 years ago.

Maybe it’s just me, but I also noticed a distinct lack of Christmas spirit in the air.  That sense of fun, cheerfulness and anticipation is something I’ve seen dropping since well before the move, though.  Maybe that has something to do with it, too.

I just don’t know.  Is anyone else seeing this?  Or is it just me?

6 thoughts on “Baby, it’s cold outside!”