It is finally done!

The maple grove/west yard trees are now finally cleared, trimmed and cleaned up.  After this, there will just be the basic maintenance to be taken care of in this area for the rest of the year.  Aside from maybe trimming the tall stumps, if we get a full size chainsaw before winter.

When I headed out today, the first priority was to clean up the branches and trees from last time.  In the process, I went digging around for downed branches under the last bit of trees I needed to work on, grabbed what I thought was a branch and found…

This is what I dragged out.

I haven’t the foggiest clue what it is.

It went on the junk pile by the old garden shed.

Once I did that, I broke out the weed trimmer and went to town in all the areas I’ve been working on that hadn’t been trimmed yet.

Oh, my, does it ever look awesome!!!  (click on the pictures) 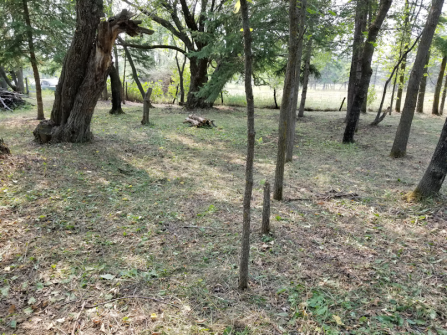 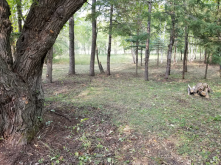 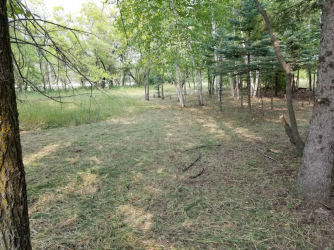 While I was using the weed trimmer, I kept having to stop and pull more branches out of the dead leaves, as I found them with the line on the trimmer.  My daughters cleaned away what they could find.  I had been taking what I cleared out of the last section (photos below) to the pile out of the yard, but by the end of the day, I was getting too tired to do both.  It was quite pleasant to work among the trees, but once I got out of the yard with the wheel barrow, or dragging a tree or two, it was like walking into a wall of heat.  So I started leaving things to the side, then the girls did a fantastic job of cleaning it all away, later.

While I wasn’t going to work on the rest of the fence line, I did go in with the weed trimmer.  I took the before picture when I last worked in the area a few days ago. 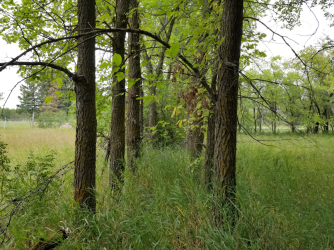 There was just the last bit to work on, over by the power pole (see below).  I went into it with the weed trimmer as much as I could, but there was a section by the gooseberry bush I couldn’t reach, because I kept getting stabbed by low hanging and dead branches!

This side will probably need to be thinned down more, but I will wait and see how the remaining trees do over the next year or two.  If the maples do well, I might trim the elms to give them more room to grow, because maples can get so huge.  If the elms do well, I may trim the maples.  The maple I’m standing next to as I take the photo (in the foreground, to the right) is going to need thinning, but it can wait.

There were groups of trees where maple and elm were growing against each other.  !!

This next section shows some apple trees. 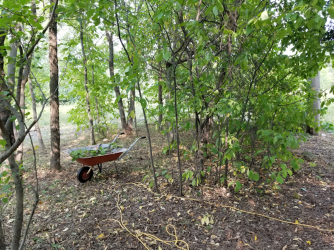 In the before picture, there is a crab apple tree that is part of the row of crab apples in the middle of this area, but this one had so many little apple trees growing around it.  Likely self seeded, as apples fell over the years.  As I went through them, trying to figure out what to keep and what to take out, I discovered the biggest one – the one that would have been originally planted – was almost entirely dead.  It had two younger ones growing next to it, so I left those.  They are too close together, but I will see which of them does better over the next few years, before deciding if they need to be thinned more.

The major challenge was the big ornamental apple tree.  The branches were so twisted and wrapped around each other, with living tangled up with the dead.  It was a struggle to get them free of each other.  Most of it was growing towards the East – the morning sun would be the only real sunlight it would be getting – and that’s there all the little apples is had are hanging from.

There were so many dead branches higher up on all of these trees.  The extended pruning saw got quite a workout.  Not just to pull down or cut dead branches, but to untangle them to get them down.

Sadly, I was not able to use my little electric chain saw/extended pole pruner.  I checked it over thoroughly (it’s really designed to be idiot proof) and everything looked good.  Yet when I tried to use it, it started screaming and immediately began to jam.  It was also dripping chain oil. 😦

Time to see how long the warranty is for. 😦  Or if it’s still covered.  All I can think of that’s different that might be an issue is the chain oil.  The oil it came with was perfectly clear, like water.  The chain oil I have now is generic, and red.  The paperwork did recommend using their brand of chain oil, but it seems not to be available in Canada.

This rather sucks, because it did make work go much faster, when it was working!

Still, I have the tools I need to do the job, and the next time I am able to work on the trees, it will be at the spruce grove!  Woo Hoo!!!