Today we made a trip into the city to play tourist, run a few errands, then pick up some stuff for my husband’s birthday.

It made for a very long, but enjoyable, day.

We started off with an early lunch, taking advantage of being in the city.  It turns out that Le Burger Week started today (I’d never heard of it before), so I tried the burger offering at an Asian fusion type place.

I can’t even remember what it was called, but it was SO good!  Even better after I realized it had jalapeño in it, and took it out.  I love the flavour, but don’t do spicy well at all, due to damage to my tongue. 😦  That spiral cut potato in the background was delicious, too!

It was really hard to choose from the menu, though.  I had originally intended to have a bento box, and as good as the burger was, I’m still not sure I made the right choice.

My daughters both ended up choosing a sushi and sashimi bento, while our guest chose the shrimp one I had been eye-balling.  The only sushi we have available out here is grocery store sushi.  I’ve tried it.  It’s pretty… dry.

Choices like this is one of the things we do miss about city living!!!

While playing tourist, one of the places we visited as a prairie garden filled with native plants.

It looks a lot like our outer yard, except with all the varieties in a much smaller space. 😀  Mind you, there were a few things I’ve never seen before, but most of it was quite familiar.  I’ll post some of the better pictures I got, later on.

As we ran errands before heading out, my darling daughters found, then got, something for me. 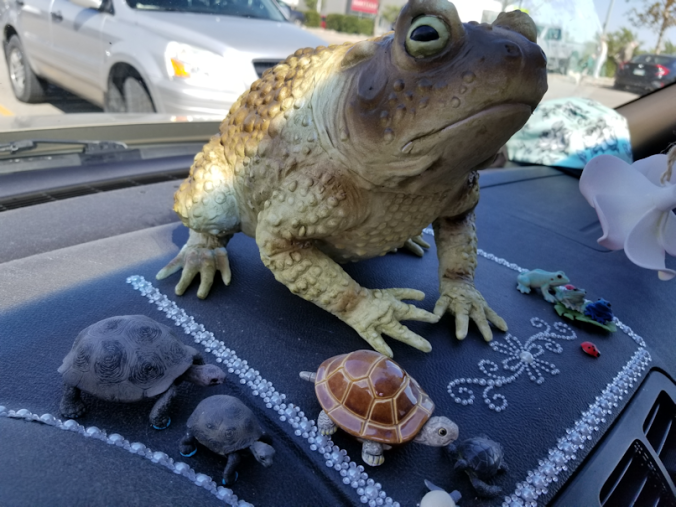 I think I will call him Yorick.

Alas, he is too big for my dash.  As I write this, he sits on my printer, looking at me.

He is soft and squishy and marvelous.