It was such a beautiful day today – we hit 8C today – I couldn’t resist!  I started working on the spruce grove perimeter again.  With the manual labour, the cooler temperatures are just perfect.

Rather than start were I left off last time, I started near the outhouse and garage.  I want to be able to go into the area with my wheelbarrow and tools from here, rather than having to go all the way around where I’d already cleared.  Also, there was a pile of junk at the corner of the garage I wanted to clear out.

It turned out to be a much bigger job than I expected!

In fact, I’ll be splitting this up into three posts to cover it all – including when I had to stop and get one of my daughters to help me get out a trapped kitten! 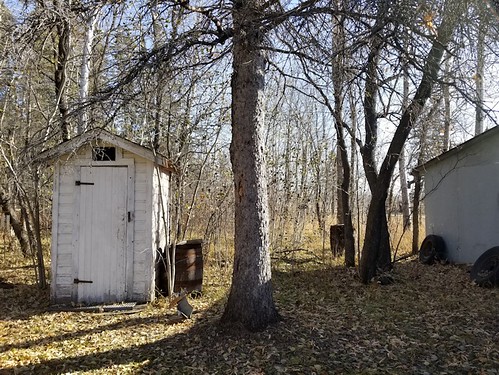 So here we have a before picture by the outhouse.  There’s the remains of the platform that used to hold a bird house on the top of the broken power pole (my brother and his son moved the pole itself out of the yard for us, when they came for one of the tractors. 🙂 )  The wooden barrel next to it has a piece of tin as a cover, with a brick to keep it from blowing away.  I thought it might be for ashes or sawdust, to sprinkle into the outhouse pit after use, but it was completely empty, and no sign of ashes or sawdust.  The other wooden barrel was just sitting there, upside down. 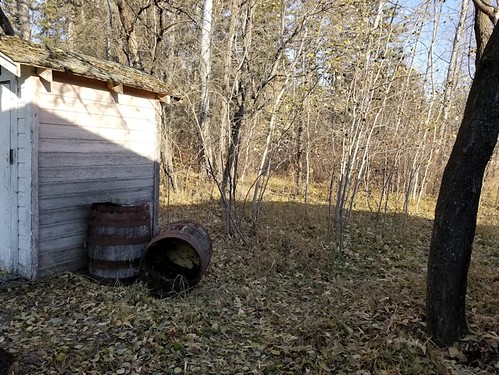 For now, I moved the barrels next to each other; they are pretty rotten and will likely end up on the junk pile.

Eventually, I will clear the rest of the trees growing too close to the outhouse, but that will likely wait until next year. 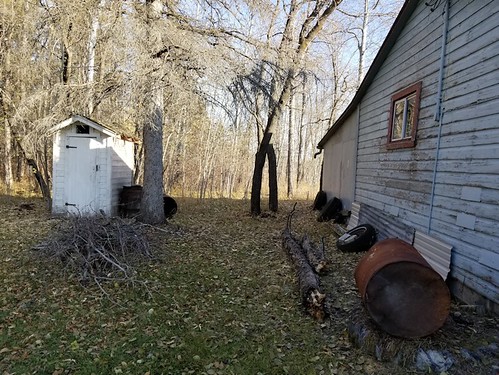 Here is the “after” photo.  I piled cuttings here, just until I reached a point where I could toss them over the fence.  At the start, I could barely reach the fence at this end at all.

The pieces of tree are actually one tree.  It had been there long enough to rot to the point that it broke when I picked it up.  Which made it easier to drag out of the bushes. 🙂  You can just barely see parts of it in the before picture; it was largely buried in tall grass.

This next bunch of photos are by the north corner of the garage. 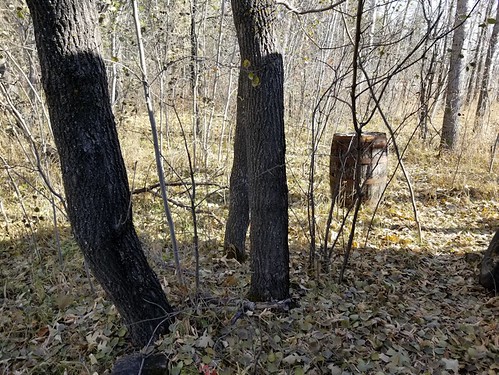 Lots of little saplings and fallen branches (you can see a larger branch between the trunks, that is from the tree I dragged out) that made going through here a pain. 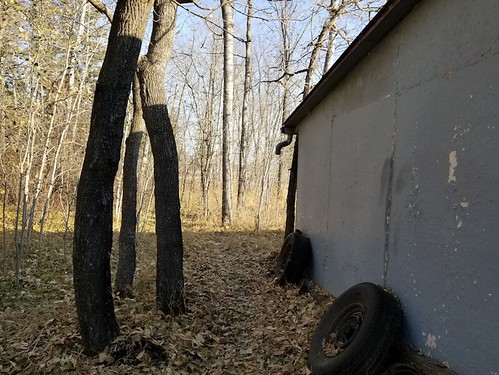 Much nicer to get through now!  Including with a wheelbarrow. 🙂

Next up is the East side of the garage. 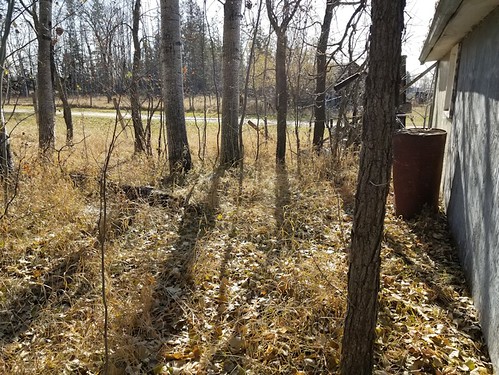 There’s enough fallen branches and trees here to make going through quite difficult.

As I continue down the fence line, there’s going to be the usual decision making of which trees to take down and which to keep. 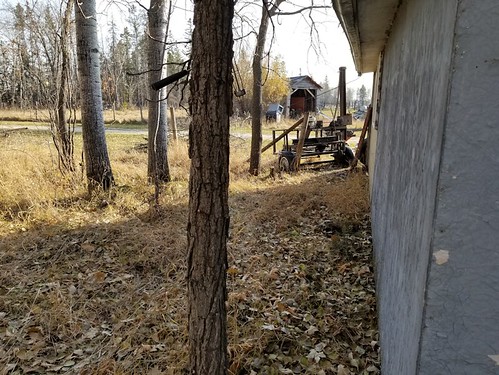 Not here.  The last thing we want is too many trees, too close to the garage.  The oak in the foreground, an elm at the other end, and the big poplars are fine, but any little stuff here, has to go. 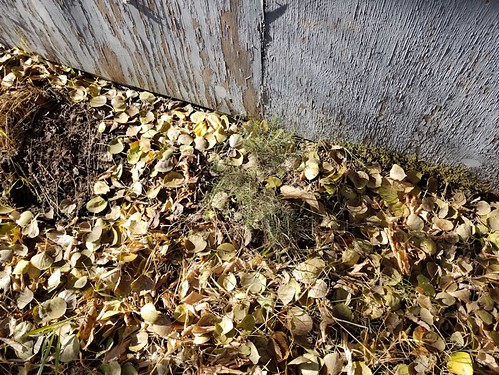 This little spruce will stay here and await transplanting. 🙂 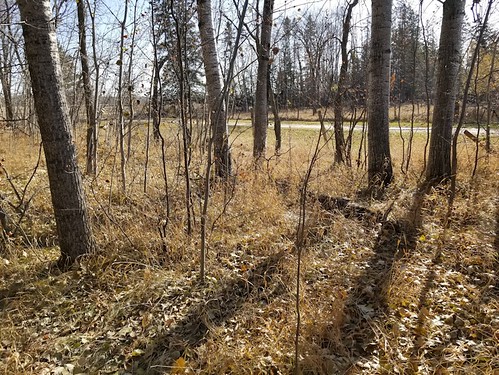 Here, I’m standing by the side of the garage and looking in.  I don’t plan to do much here, this year, but I still wanted to clear at least some of it. 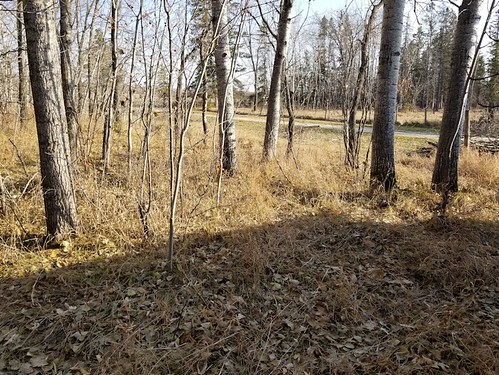 Getting the dead tree out, and the brush it fell on top of, alone made a huge difference in accessing this area!

This next before photo was taken from right near the south corner of the garage. 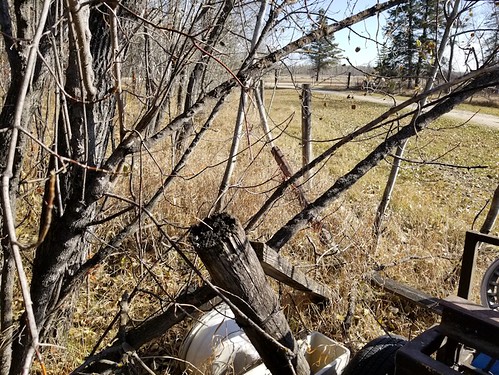 I was standing on junk just to take the picture.  Clearing out this corner will get its own post!

Before I could reach the junk, though, I had to clear away enough trees to be able to reach the fence. 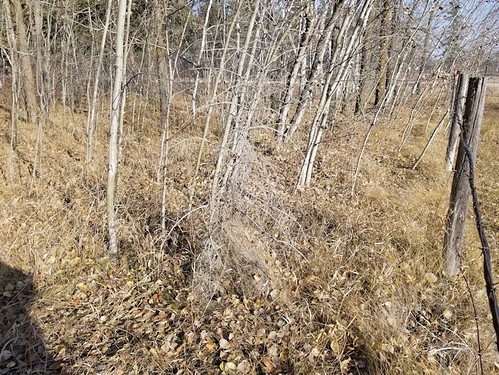 After clearing the junk pile, I started down the line.  A row of spruces had been planted here, at some point.  They are all dead.  The poplars are all self-sown.  I will figure out which to keep and which to clear out, later on, but anything along the fence line itself is going to go.  The entire fence will be replaced at some point. 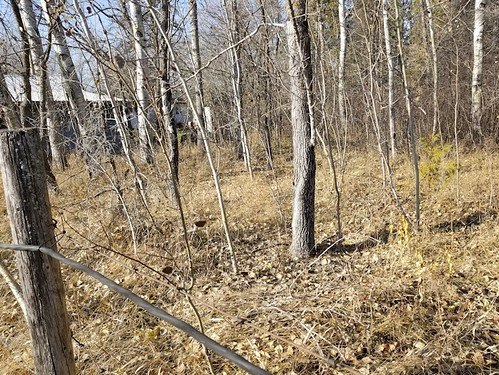 See that little bit of bright green on the right of the above photo?  That is a single, solitary cedar someone planted, surrounded by self-sown poplars.

The cedar stays.  The poplars go!  My goal of the day was to reach this area and clear around the cedar. 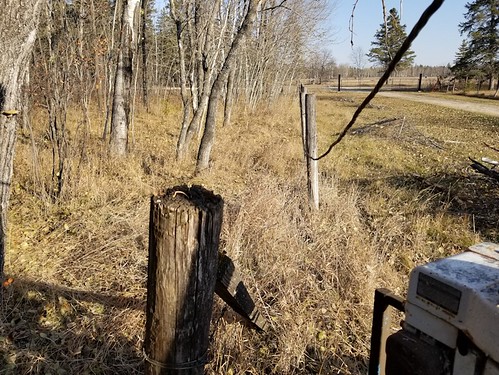 Here is the after photo.  That fence post in the foreground?  Turns out the only thing holding it up was the toilet tank someone left near its base.  It was completely rotted through at ground level.  I was able to pull the barbed wire attached to its based taut, and maneuver the support, enough for it to stand on its own.  At least until a stiff breeze knocks it over! *L*  The post with red on it, that you can see in the before, picture fell over, too.  There’s no barbed wire attached it it, so I could just pull it out completely.

Also, I discovered there was a gate right were I’m standing to take the photo!  That was a surprise.

One thought on “Clean Up: spruce grove perimeter, south side”