So, I knew there was a fair bit of junk piled on and around a piece of equipment next to the garage.

I didn’t realize just how bad it was.

So let’s start with some before photos.

I’m still just amazed by the fact that someone dragged a toilet over here. 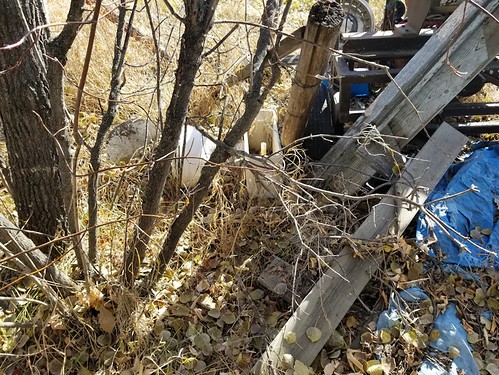 Before I could even reach any of this to clear it, I had to cut away the little maples that had started to grow here. 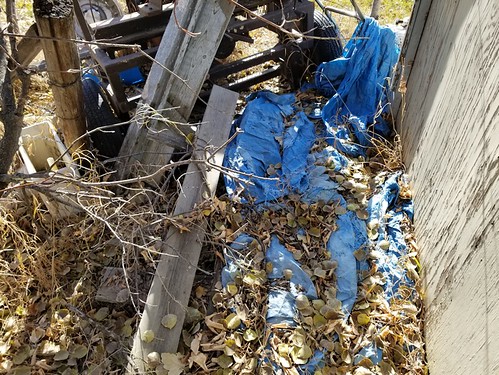 I’m kind of guessing that the tarp, at some point, covered the equipment? 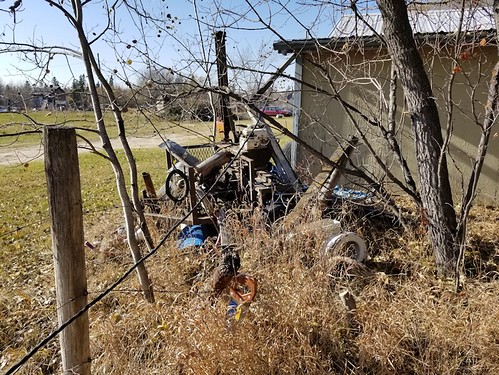 Here, I had started to cut away some little trees, so I could access the area.

The post I hung my saw on to take this picture turned out to be completely broken at ground level.  The only things holding it up were dead branches and debris. 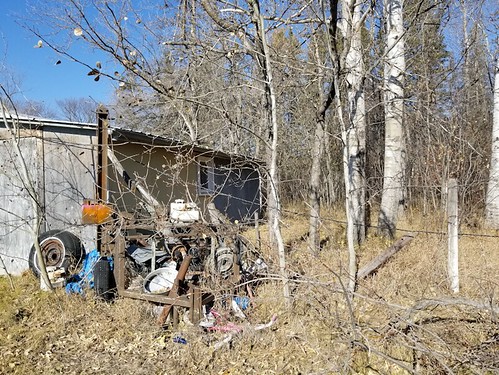 Trees were starting to grow among the junk.  You can barely see it, but there is a small bicycle inner tub there.  You can actually see it clearly in the previous photo. Someone hung it onto a sapling that was growing THROUGH the piece of equipment.

Let’s just think about that for a moment.

A tree was starting to grow THROUGH a piece of machinery.  Left there, it would eventually make moving the equipment impossible, and wreck it.

But instead of cutting it away, someone thought it was a handy thing to hang an old inner tube.

Note the power line running from the door of this side of the garage (this lean to was a work shop, and was where my dad’s compressor was, before it disappeared).  This is the line that extends all the way to the gate, where we have our lights plugged in.  I’ll get back to that, at the end of this post.

As I mentioned, I had to clear away some of the brush just to be able to reach some of the junk.

I found things, in the process. 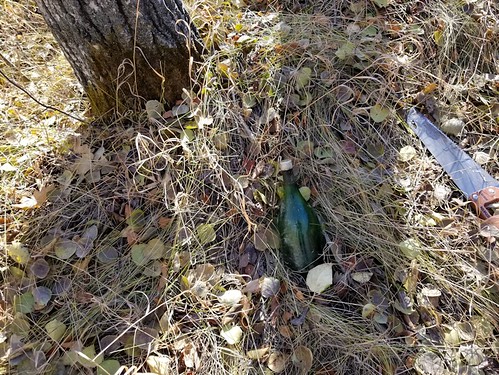 Which I found with my foot.  It was completely hidden in the tall grass. 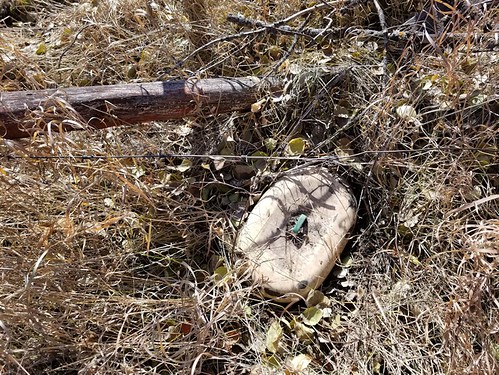 Plus this roaster lid.  Which does not match the roaster that is sitting inside the piece of equipment.

After I uncovered it and took the picture, this happened. 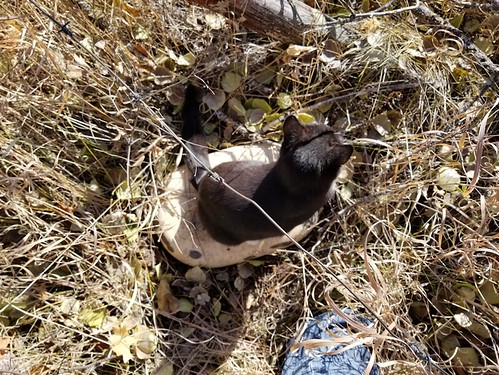 Doom Guy was right into keeping me company as I worked.  To the point that I had to watch I didn’t step on him, or drop trees and branches on him!  His mom was hanging around, too. 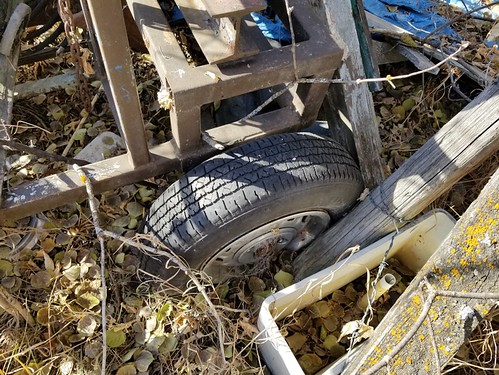 This thing was backed right into the fence post.  It may well be what broke it.

Why?  Why did someone do that?

I started clearing the junk away, then tried to pull a child’s bike out from under it.

Which turned out to be two bikes, each missing their front tire. 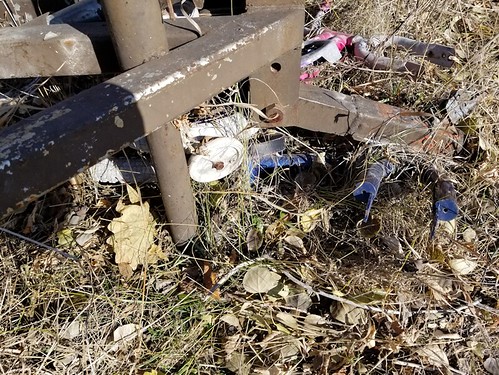 I’d seen the blue before, but hadn’t been able to see it was part of another entire bike until now.  I’d just thought it was a piece.

They both had training wheels, caught on each other, and I could not pull them out.

Which is when I realized that the only way for these to be under the hitch like that, was for them to have been there BEFORE the equipment was released from whatever was used to tow it.

Also, the hitch is broken.  Even if I had something I could use to pull this out of there, I would not be able to hook it up.

After fighting with it for a while, I opened up the side of the garage and went looking.  I knew there was an old style jack in there that I might be able to use to lift the hitch end, but it had no handle, so it couldn’t be used.  Finally, I just grabbed a metal bar, put it under the hitch and, and tried to lever it.

I was able to move and loosen things, but still couldn’t get the bikes out.  They were too tangled up with each other, and pieces of the hitch end.

Finally, I just put the bar under the hitch end and lifted it straight up.  Eventually, it loosened up enough to lift higher, and the weight of the back end was enough to tip the whole thing, allowing me to finally pull out the bikes. 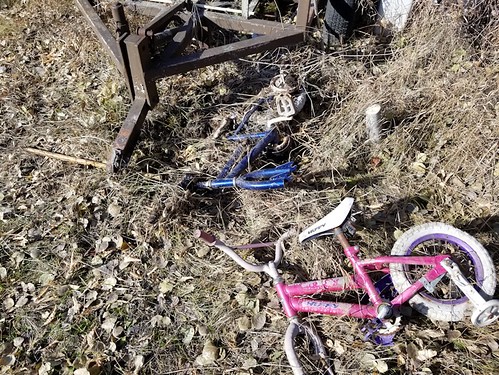 Looking at the size of the bikes, I have no clue who they belonged to or why there were there.  This thing has been here for probably at least 8 years (my late brother built it).  There were no children in the family young enough for bikes this small.

Why were they dumped there, and why was a piece of equipment dropped on top of them?

Speaking of on top of things… 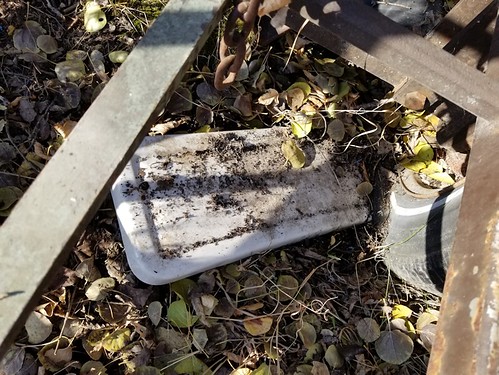 Yeah.  That’s a toilet tank lid, partly UNDER the wheel.

Which means the toilet was already there, before someone backed the equipment into the space.

I just can’t fathom it!

I also found another pot under there, along with other junk.  After clearing it off, I went to clear the tarp.

Which turned out to be huge, and covering… 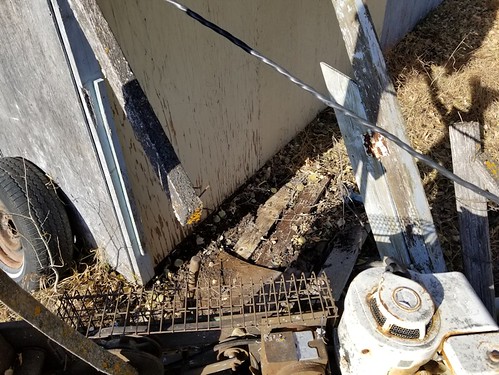 … that’s the remains of a gate.

There was a gate here.

I have no memory of a gate here.  Which makes sense, since I believe the lean to was added to the garage after I moved away.

The gate is completely destroyed.

I wonder.  Was the gate already fallen down, when this was backed into the post, or did it get knocked down at the same time the post was backed into?

Okay.  We’ll just clean that up, too.

Which is when I found… 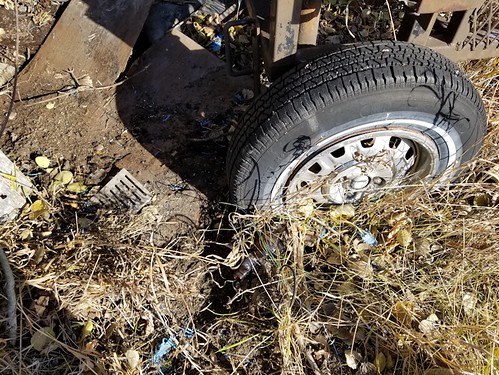 Can you see it?  Right by the tire. 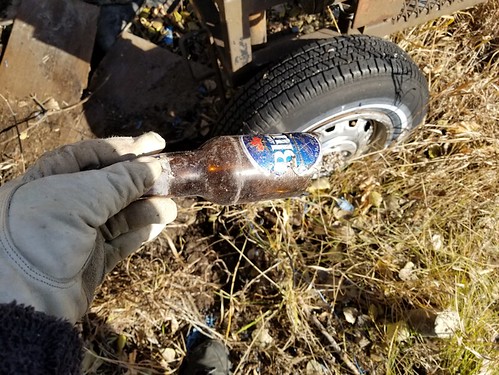 A broken beer bottle (yes, I found the broken off base, and got rid of it, too!)

That was my late brother’s favourite brand of beer.

It seems he left empty bottles and cans all over the place!

Okay, so I got most of it cleared, cutting away the bigger trees in the process.  There was also a little sapling against the garage wall that needed cutting away.  But first, I needed to roll away the tire that was leaning against the wall.  I went to cut the tree and… 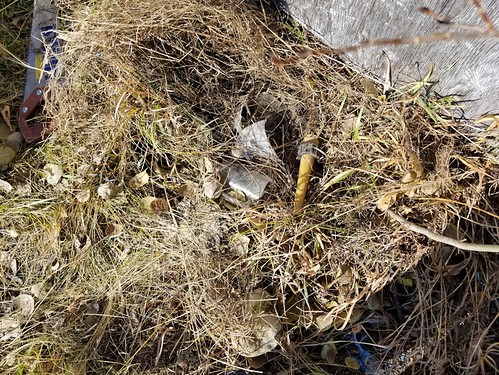 Buried in the grass was a clear plastic mug, the spout from a gas can, and a broken bottle. along with random bits of unidentifiable metal things.

It took me quite a while before I got all the broken pieces of glass out!  At least I hope I got all of them. 😦

In the middle of all this, I had to stop and free a kitten trapped in the garage, but I’ll post about that, next.

Here is all the stuff I pulled out of that one corner.

First, there’s the remains of the gate. 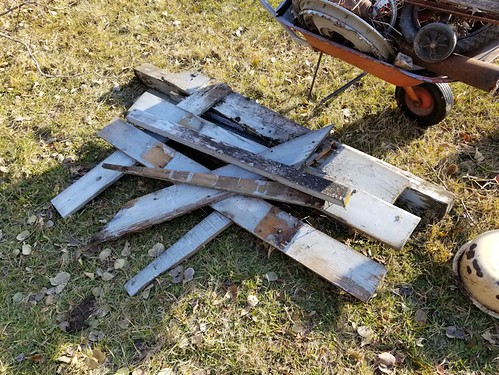 Lots of nails in there, so it’s not going into any of the branches piles; just the junk pile.

Then there was all this. 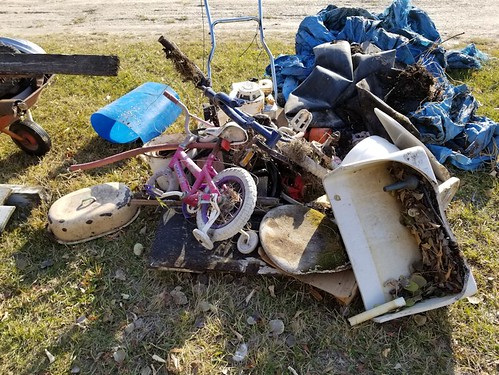 I had thought I would put the lawn mower under an old shed for a bit of shelter, but when I pulled it out, it started to fall apart.  So, junk pile it is.

There were three tiny bikes in total.  The toilet tank broke as I lugged it out.  The seat is wood and was rotten, so it came right off.  There was a tractor tire inner tube near the toilet tank, but when I took the toilet pieces out, I found a second inner tube, half buried, under it. 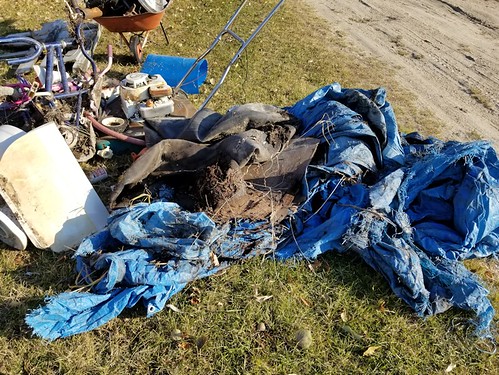 Both are now on the old tarp here, along with the toilet tank lid, so nothing blows away.  Also, the rotten pieces of old paneling that was under the remains of the gate.  I wasn’t able to pick up all if it, it was so badly decomposed. 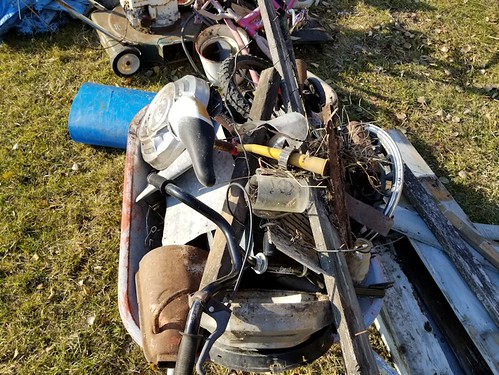 In the wheelbarrow is one tiny bike, some hub caps, wire, mystery metal things, and all the broken glass I could find.  Also, pieces of wood with lots of nails in them.

I could not believe how much junk was in this one spot! 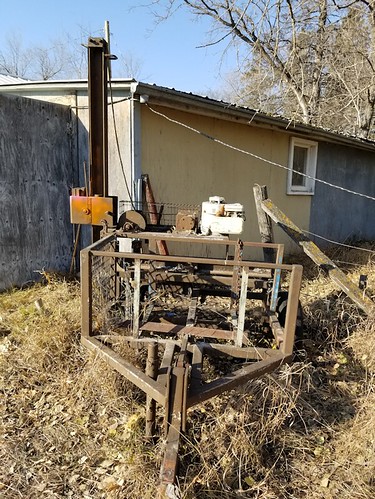 I asked my older brother about this thing, and he told me what it is.  It’s a fence post pounder!  To the left, there is a metal block that would be positioned over where the fence post was to go.  It was raised up, the post put in position in the post hole, and the metal piece would be dropped on it, repeatedly.

Sure beats wielding a sledge hammer!

It also carried a load of fence posts, so one could just pull it along the fence line and install post after post.

My late brother was ingenious.

Sadly, it’s been in the weather for so long, all the belts are rotting and the metal is rusting.  The tires are probably unsalvageable.  My brother thinks it can be fixed up, and got working again, though.  Which would be really cool! 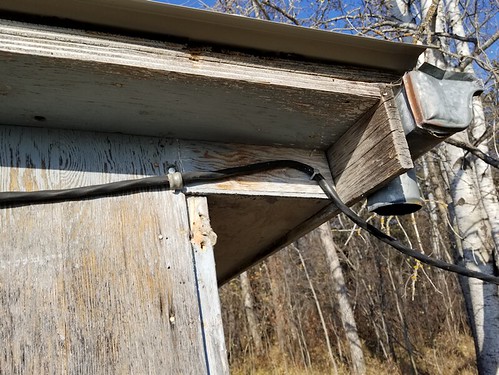 While clearing the counter inside the garage to rescue the kitten, I found all sorts of things.  Including something I could use to support the cable, instead of it just dangling out the corner of the door!  It was likely supported by whatever had been across the top of the gate, before it all fell down.

If we decide to keep a power line to the gate in the future, I would like to have it running underground, instead.

Meanwhile, I’m going to have to find some way to either move the post pounder out from there, or cover it to protect it from the elements.

Next up… kitty rescue!

2 thoughts on “Clean up: spruce grove perimeter – the junk pile!”