Doom Guy and Beep Beep kept me company while I was cleaning up around the garage and fence line this afternoon.  When I got to where I had to figure out some way to lift the post hole pounder, to free up the bikes under it, I went into the lean to on this side of the garage, to find something to help.

Since I was going in and out of it, I left the door open.

Of course, the cats went in to check it out.  This is the only part of the garage they can’t squeeze their way into, so it was all new to them!

While working on the junk pile, I could hear meowing from the garage.  I went in to see, and from the direction of the sound, figured Doom Guy was exploring under the counter.  After a while, though, the meowing started to sound decidedly distressed.

So I went back to look again.

Which is when I discovered Doom Guy was trapped behind the counter.

The counter has open space under it, but it also had a back to it.  Above the counter are boards covering the wall joists; likely to prevent things from falling off the back of the counter, where they could not be retrieved.

Doom Guy was somewhere in the wall joists!

Now, while we’ve been using this lean to for storing the riding mower, and a few other things, we were not going to start sorting and cleaning up the garage any time soon.  So stuff that’s in there have been there for years.

I ended up getting one of my daughters to come and help me.  She came into the garage, just in time to see the top of Doom Guy’s head, before he fell back down again.  He could climb to the top, but couldn’t get over the edge of the board.

So we cleared the end of the counter, my daughter climbed on top of it, and ripped the board that was there off completely. 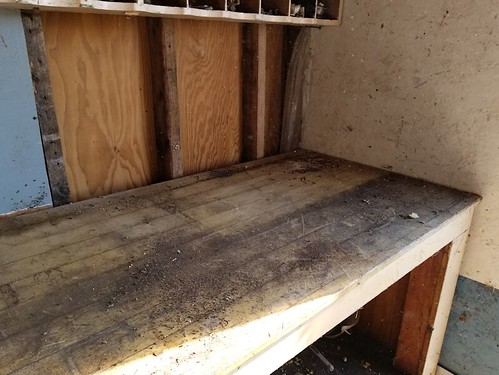 The blue on the left is another section of board, blocking the space.

This is some of the stuff that was on the counter. 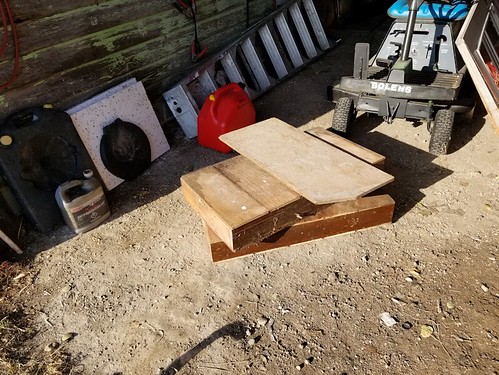 The shadow is Beep Beep’s tail. 😀

The wooden things on the ground are shelves, filled with nuts, bolts and other small items. All metal.

I’m glad the two parts were separate, because it took two of us lift each of them off! 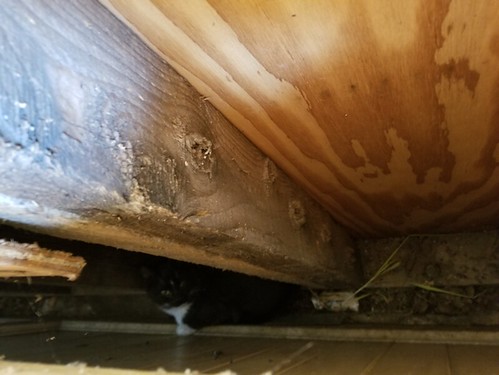 The noise and bustle we made spooked Doom Guy into squeezing over to another space. I could only see him by using my phone! 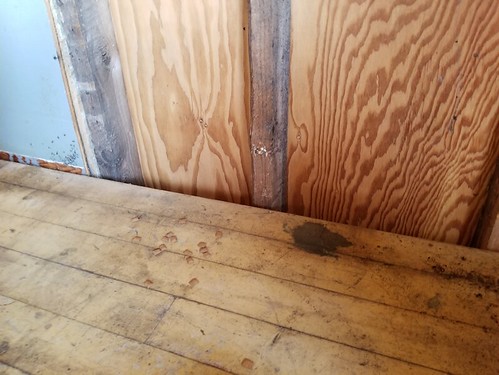 We even put some cat treats at the top, to tempt him to climb up again.

At one point, I could hear him purring!

I even managed to move the counter away from the wall by a couple of inches.  It couldn’t be moved too far, as that end is resting on a bit of concrete foundation.  It would fall right off, if moved too far.

We left the garage to give Doom Guy some quiet, so he would try and climb again.  After a while, my daughter came back.  We could hear some scrambling, so she hopped onto the counter.  As soon as he was close enough, she grabbed him by the scruff of the neck and pulled him the rest of the way out! 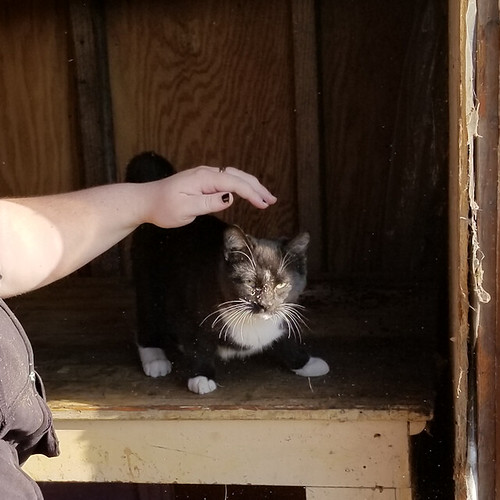 He was just covered in dirt and cobwebs!

He does not look happy. 😀

When he got down to the ground, she tried to give him treats there, but he was more interested in attention.

So his mom ate them.

My daughter took the treat container and, shaking it to make some noise, tried to tempt him away from the garage.  Instead, he kept sniffing the spot where the treats his mother ate had been.  So I picked him up and took him to my daughter, who got him over to the house.

I’m glad we were able to get him out of there.  For a while, I was seriously considering cutting a hole in the wall, from the outside!

I haven’t put anything back on the counter, yet.  A lot of what’s there might just get thrown out (why are there so many empty tool and tool accessory cases?).  At the very least, I want to clean the end of the counter before putting the shelves back – and getting rid of all the dead Asian Lady Beetles that fell out when the board got pulled off!

I supposed the board should be put back.  Maybe not nailed and glued in place again, though!

While fussing with things on the counter later on, though, something caught my eye, in between some pieces and parts, boxes and cases.

Was that a glass?

With liquid in it? 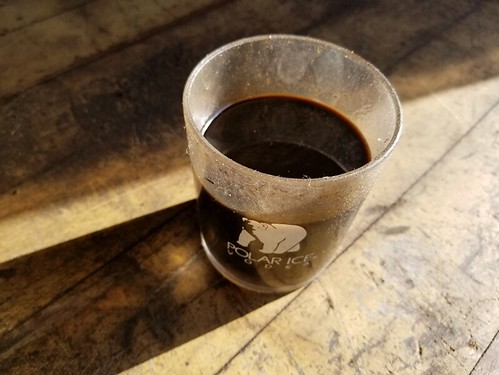 Why is that there?

How long has it been there?

We’re going to have our work cut out for us, when we finally get to cleaning the garage.

Hopefully, no more kittens will need to be rescued!