Today was a day for visiting.

We even got a visit from my brother’s dog, this morning. 🙂 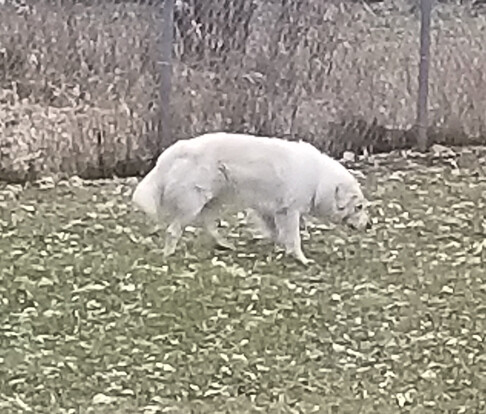 I think we need to add “dog” to the list of critters we’ve been feeding – he does seem to enjoy the cat kibble! 😀

Then it was time for me to go and visit my mother.

She asked me to drive her over to visit her sister, who is in long term care, while her car is still insured.  I headed out early enough to visit with my mom for a while before we headed out to the town her sister is in.  It’s the same place my father spent the last 6 months of his life.

This is the first time I’ve seen my aunt in many years.  She turned 95 this month (she and my father were the same age, and even born in the same month), and isn’t very mobile anymore.  She didn’t recognize me or my mother at all, but she was still so happy to see us.

While we were there, my mother kept talking to her, and translating for me – my aunt was speaking Ukrainian instead of Polish, with a smattering of Russian thrown in – all languages from her childhood.  I don’t think she ever learned English.  I could understand bits and pieces, but she was so quiet, I could barely hear much of what she was saying.  At one point, my mother sang to her songs my aunt had taught her as a child.  My aunt couldn’t remember any of them, but she clearly enjoyed hearing them.  I was able to get a couple of videos.  At another point, my aunt started commenting on the pictures on a shelf behind my mother, that she could see from the bed, saying something about the handsome young man in one of them.  It was a photo of her son, who died of cancer some 10 or more years ago.  She had no idea who was in the photo.  She has outlived a husband and two or her own children, and doesn’t remember or recognize any of them.

When she grew tired and started to fall asleep, my mother decided it was time to go, so she woke her up enough to say some prayers.  As my mother started reciting prayers in Polish, my aunt, who couldn’t remember the songs my mother sang, started to follow along with the prayers.  My mother held out well until she started to say goodbye, which is when she started crying.  It must be so hard on her to see her sister like this.

After we left, we stayed in town for a quick stop at a restaurant for a snack before I drove my mom home.

My mom being my mom, there always had to be something, though!

During conversation, I brought up the possibility of keeping her car insured, but still stored at the farm.  It would stay in her name, and I would pay the insurance.  It would cost her nothing plus, this way, the car could still be used as she needed rides; it’s easier for her to get in and out of than our van, plus it’s not good for vehicles to just sit for a long time, unused.  I made sure to say I was fine with driving her around with our own van, but it was something for her to think about.  Then I dropped it, because I could see she was starting to get “that” face.

After I took her home, I stayed to visit a bit longer.  Before I left, though, she brought up the car.  Then she started to say to me that, if only we were more “civilized”, and would go to church, and the girls got jobs or got married, etc., etc., she would consider it…  At which point I interrupted her to say, I wasn’t asking her to GIVE me her car.  I was just suggesting she might want to keep it registered and insured.

But you want to use it, she said.

Yes – for HER, to drive her places.

Oh, no, she says to me.  She won’t need anything like that.

So she won’t keep it registered.

I’m trying to wrap my head around her logic, here.  She would rather the car sat, unused (she has no plans to sell it), and unable to be used, because she doesn’t want ME to use it, because we aren’t “civilized” (which she seems to have her own definition of).  Even though I am offering to pay for the insurance for her.  Basically, I’m offering her a gift, but she seemed to think that I was asking something from her, instead.

Aside from that, the time with my mother went well, overall.  Those visits are always touch and go.  Then, when I got home, I found something amusing awaiting.  The girls hauled away the junk I’d cleared out, adding it to the pile of stuff we plan to get hauled away.  (I’d told my mom about it, and even showed her pictures, and she had a hard time even remembering where it was, and had no idea all of that was there!)  They took everything, but the toilet bowl.  That was sitting along the side of the driveway near the garage, with the rotted out wooden seat, carefully placed back on it.

My older daughter says she plans to set it up near the outhouse, like some kind of yard art spare bathroom. LOL

Oh, I did remember to ask my mother about the cedar.

She had no idea what I was talking about.  She didn’t plant it.   She suggested that it was something that sowed itself, but I explained it’s not native to here; there is nowhere it could have sown itself from.

I can’t think of anyone else who would have planted it there.

We have a mystery tree! 😀