Today, I decided to get started on the flower garden off the Old Kitchen.  When my mother came by a couple of days ago, we talked about what was there, what she wanted, and what I was thinking of doing.  I now know that the vines, while deliberately planted, turned out to be invasive, so she wants them gone.  There are several bushes she wants to stay, but the greenery below can go completely.  The fence will also be removed, but she doesn’t care if any new fence gets put up again later.  It can stay down.

I had already started clearing the area a bit.  Now that I know my mother is good with the greenery being gone, I have decided that I will start doing “lasagna garden” type layering to build up the soil, while at the same time killing off the invasive plants.

I intend to keep the rhubarb, which will be fairly easy to work around, and the chives are on the outside of the fence line, but whatever onions are growing among the crab grass will be buried, too.

First order of business, then, was to remove the fencing.  My daughters would continue to clean around the yard, but instead of taking the raked leaves to the big garden, I asked them to pile it near the flower garden, and I will use it later. 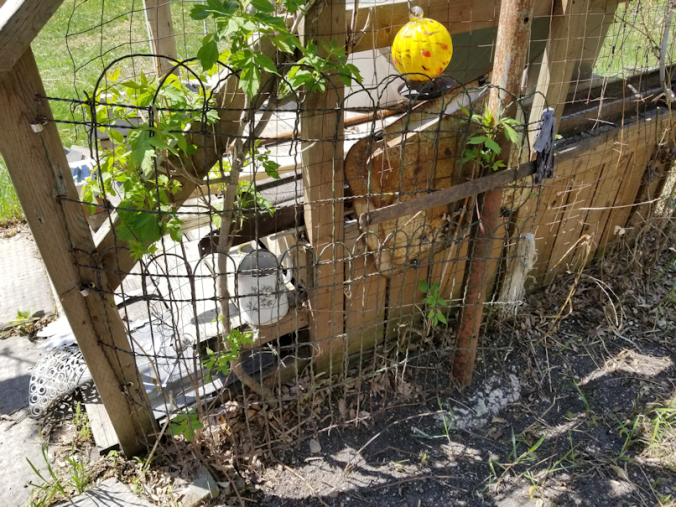 The first section to work on was the “gate”.  I’d used a stick to prop it open, because it kept flopping.

When I moved the bright yellow thing hanging there, it was actually the first time I’d looked closely at it.  I had just thought it was some sort of decoration. 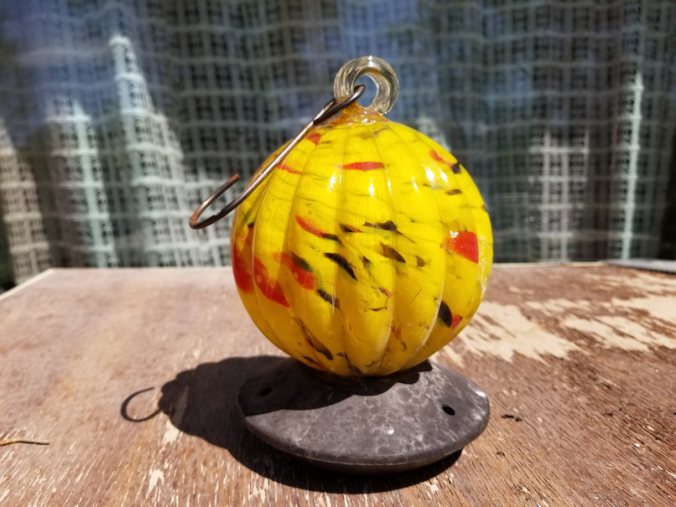 No idea why it was left hanging there, instead of being taken inside for the winter.  Now that I think of it, it may well have been hanging there for years.

This is the toy rocking horse I’d found buried in the leaves and other dead foliage, when I had first started cleaning the area.

This is the opposite end of the fencing by the gate.  It just sort of ends, sticking out past the clothes line platform.

I honestly can’t think of why any fencing was added there.  It was attached to the platform in places, so it’s not like it was added before the platform was rebuilt.  It serves no purpose that I can think of.

While working on the gate, I quickly discovered I needed to watch my step; these broken blocks and bricks move when you step on them!

There is a downspout near there, currently with a rain barrel under it.  I am guessing these were added because the area would become muddy.

We’ll have to figure something else out, later.  I don’t know about right by the Old Kitchen, but in the garden itself, I might look into putting some stepping stones or some other decorative, yet useful, elements.

After removing the gate portion, I found a challenge. The self-sown trees can actually grown around the wire of the fencing.  To remove the fencing, I had to free it by cutting the trees.

That was another reason the fencing needed to go, here.  There was no way to clear away the self-sown saplings.  They have to be cleared away, or they will destroy the clothes line platform as they get bigger.  Plus, of course, they’re close to the house, and the roots would cause problems, too.

I’ll come back later to cut away the remaining bits of saplings and do other clean up.

Here is how things looked from the inside of the garden, as I started.

This is the south side section.

That comes up, later.

This is what the middle looked like.  All that greenery on the bottom is invasive plants.

It was now time to work on the side section of the fence, which started at the corner of the clothes line platform.

But first, I needed to be able to get to it.

I’d talked to my mother about the trees in the re-purposed tire planters, and the bush that was in the way of hanging anything from the planter.  She was good with me getting rid of the planters, and the saplings in them were self-sown.  While she didn’t say it outright, it was clear she wanted to bush under the clothes line to remain, but she was okay with it being pruned.

The saplings in the planter had shallow enough root systems, that I could pull them up fairly easily, except for one in each planter.  The toughest one had to be sawed at the tap root.

Then I pruned the bush under the clothes line. 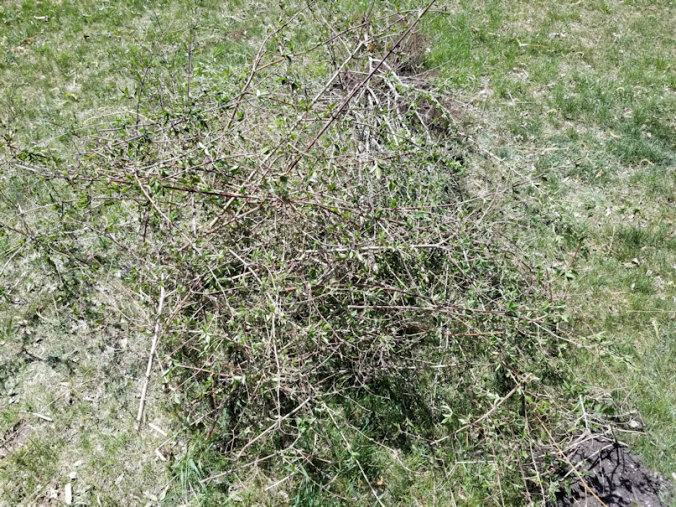 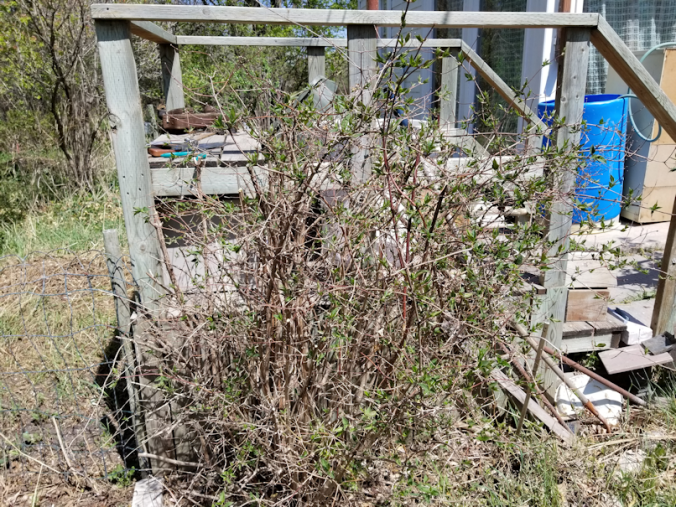 I will have to work on it again, later, to get rid of the dead branches and stuff, but for now, I just needed to get it cut back enough to clear the rail, and access the fence post at the corner.

After starting on removing the fence from the post, I quickly realized I needed to get the planter next to it out completely.  It was in the way.  So, I dumped out the soil and discovered… 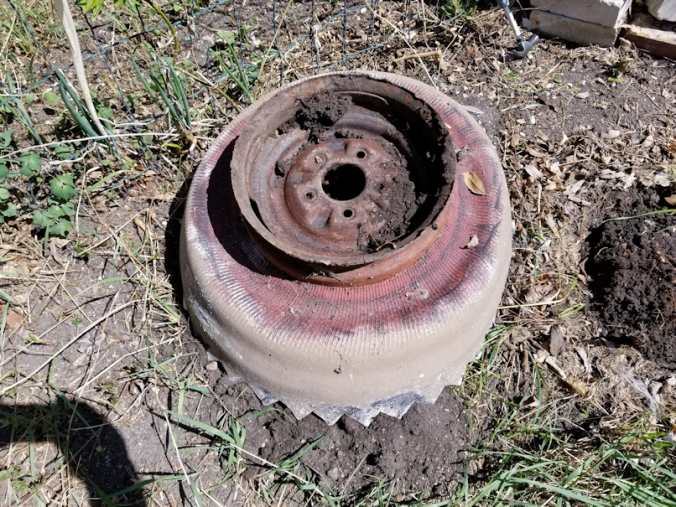 There was still a rim attached! 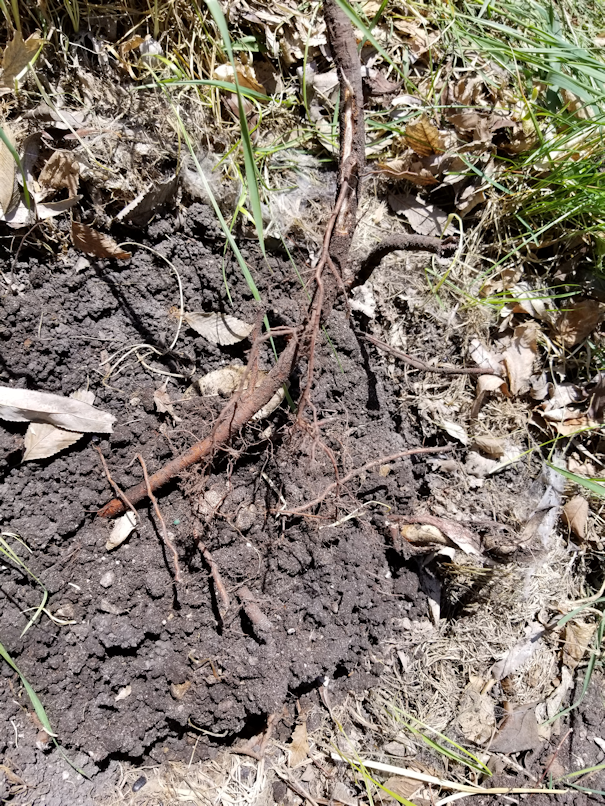 A couple of longer roots that had been giving me trouble could now be seen.  One, I had been able to break.  The other, the one to the right, had to be sawed.

Something else to go back to and clean up, so no one will trip over them.  Plus, once it’s all cleared and cleaned, we will be mowing there.

I finally was able to reach the post and start removing this section of fencing which was, for the most part, nailed in place with U nails.

Lots of U nails.

At the very bottom of that first post, however, there was one nail sticking out.  I tried several times to pull it out with the claw of my hammer, and it wouldn’t budge.

I did, however, knock off some dirt and rust, which is when I could see it was no nail at all! 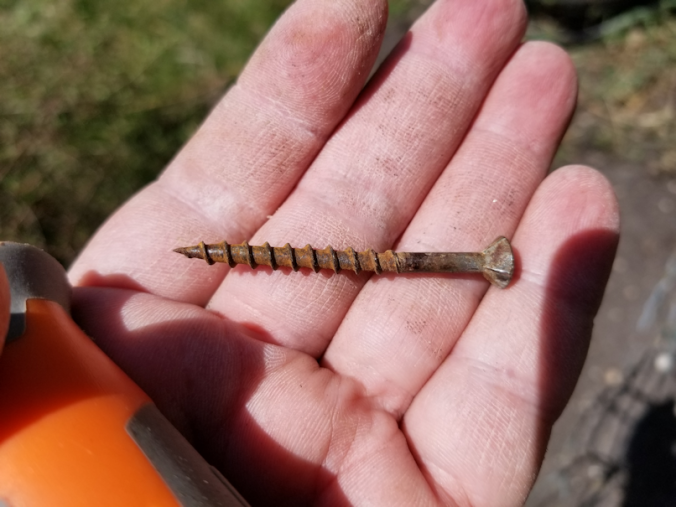 Yeah.  No wonder I wasn’t able to get it out with my hammer!

I am really appreciating the tool set my older brother and his wife gave us for Christmas.  I went into it quite a lot, today!

I got the fencing off up to the corner, where I found this.

It turns out that the section I had been working on ended at this post.  It was held in place with twisted wire, which went through holes in the metal post.  The fencing on the end section was folded around the post, then pieces were bent back to form hooks that held onto the continuing fence.

And that supporting wooden fence post at the top?

It was held in place with a large nail, through a hole at the top of the metal post, which was then hammered to a right angle to hold it in place.

In the end, it was easier for me to pick up the wooden post and hammer away at it, near the nail, then to try and pull the nail out from the other side.

Which actually served to straighten out the nail. 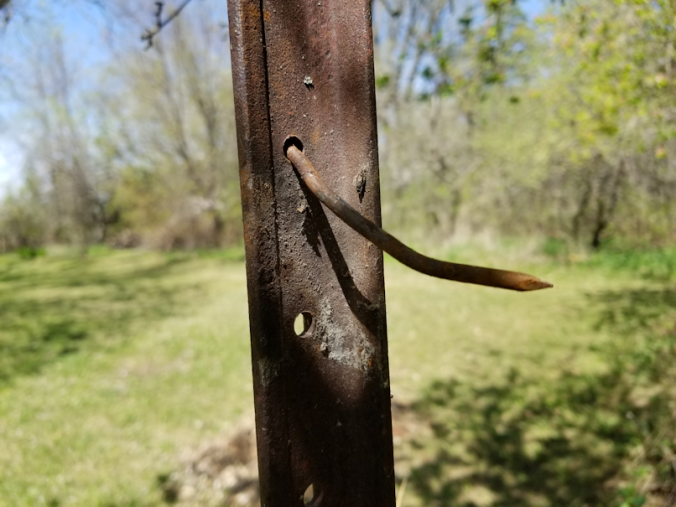 About half of the length of that nail was in the wooden post, while the other half or so was bent down on the other side of the metal.

Then I had to use pliers to untwist the wires that held the first section of fencing in place.  The wire was so old and rusting, several pieces broke off.

By this point, I’d found a bucket to take along with me, to put in the assorted nails, screws and bits of metal that I managed to keep out of the grass. 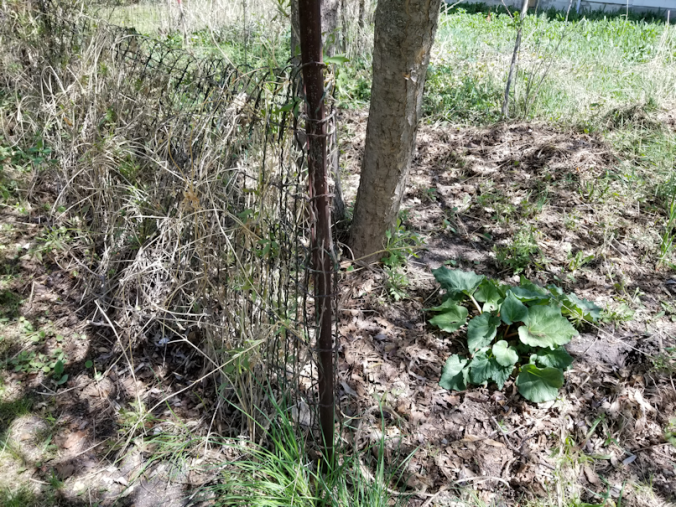 Then I just left the fence there, and took a break!  There was just the north side section to do, with two more fence posts and more roses to trim out of the fencing.

My mother tells me this is a white rose bush.  I cut away just what I absolutely had to, to get the fence loose.  I noticed some dead stems and branches that will need to be cleared away, so it’s another thing to go back to, later.

Much to my surprise, the rest of this fence was held up by what looked like a broken broom handle, shoved into the ground, a length of pipe stuck into the ground, and at the corner of the house, it was tied to the fence post with twine.  The other fence post in the middle?  Nothing.  It wasn’t attached to it at all!

Once that was done, we only needed to roll up the fencing (still full of plant matter in some areas) and haul it away.  We’ve selected a spot to leave all the detritus we find, so when we hire someone to haul the junk away, it’ll mostly be in one place.

Here is what the south corner looked like, after… 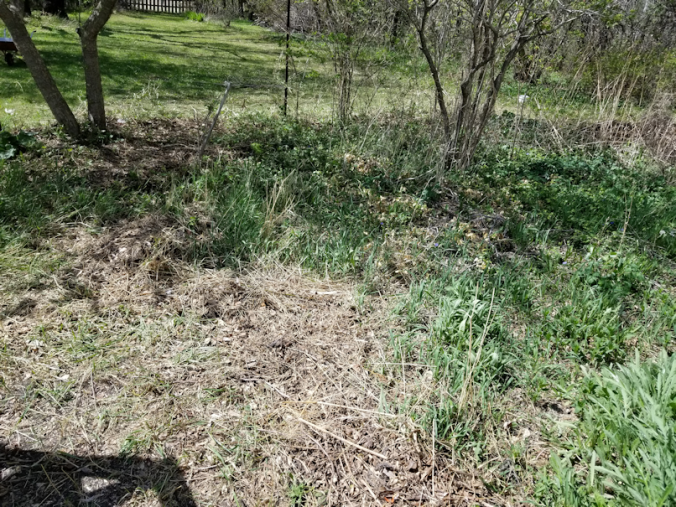 Later today, when it is cooler, I will go back and do some more clean up, and see if I can take out the fence posts.

The next major step is to first lay down a layer of cardboard (after our move, we’ve got lots of that!) and wet it down, then start to layer the leaves the girls have been piling up for me, as well as the straw that was over the septic tank like, and the straw that’s in front of the dog houses the outside cats have been using all winter.

Throughout the summer, we will continue to layer grass clipping and other yard waste, and the kitchen trimmings that would normally go onto the compost pile.  I plan to use what’s currently the compost pile as well.

By the end of fall, I hope to have some pretty solid layers on there, and by next year, it should be well-built-up soil.

At least, that’s the plan!

5 thoughts on “Progress: working on the flower garden”