The Thanksgiving family dinner we had planned last month got rescheduled to today.  Since moving here, we did have one large family dinner, before Christmas or so, so it’s been almost a year.

I think it turned out rather well. 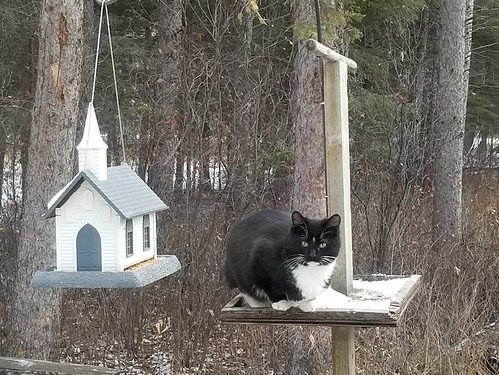 He was so funny to watch!

I actually started the dinner last night, by brining a turkey.

This time, I even remembered to get a picture BEFORE I started carving it! 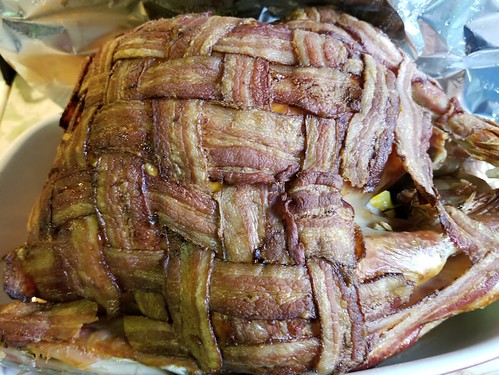 It was so awesome.

Brining turkey is the only way to go.  Juiciest. Bird. EVER!!

While I did the turkey, my older daughter did braised brussel sprouts with garlic and bacon pieces (I found some unsliced bacon during this month’s big shops, which got cubed), and my younger daughter did white and sweet mashed potatoes.  We had an appetizer tray with garlic stuffed olives, strawberries, coconut brie and truffled goat cheese (the best!!), as well as a shrimp ring, and for desert we had both apple and pumpkin pie.  My SIL brought a huge mixed green salad with all sorts of crunchy bits added to it.  It was all so delicious!

I was expecting there to be 9 of us, but my BIL is out hunting right now.  Which kinda worked for the better, because our table, extended as large as it can, really only seats 8.  My daughters were prepared to share a piano bench at one end. 😀

My sister picked up my mom on the way over.  While the last of the food was being prepped, my mom decided she wanted to take a walk around the yard.  Which, we know by now, means she wanted to do another “inspection” of the place.  Which I don’t mind.  I just wish she wouldn’t pretend otherwise!  My daughter took over carving the turkey so I could go out with her and my sister, and get my dad’s walker out for my mom to use.

The kittens were out in full force, much to their delight.  Doom Guy ended up weaving around my mother’s feet (not while she was walking, thankfully!).  We had 5 of our kittens (Corvo is still gone), The Outsider, the two moms, and even Rolando Moon came to say hi.

They were certainly entertaining!

It was not covered, last winter.

I told her I wanted to see Mary, not a garbage bag!  So she started to talk about how stuff would be growing on it (moss, she meant).  I told her I cleaned it already.  She seemed surprised, even though she’s been here since.  A bit like her asking me if I painted the downspout by the entry.  No, I haven’t painted anything – my older brother and his wife had painted the entire house, the summer before we arrived.  She didn’t notice until today, that the downspout was painted, too.

Not a criticism in any way; Lord knows, I’ve walked past many things without “seeing” them until later!

Then we continued past the clothes line platform, and she commented on the pruning of the bush she planted against it; I did too much of it, she thinks.  I did tell her we want to actually use the clothes line at some point, and it’s in the way.  Except she called it a jasmine.  The last time I asked her about it, she called it a mock orange.  I mentioned that, and she insisted, no, it’s a jasmine.  The mock orange is over there… she pointed to the honeysuckle.  I said that no, that one is the honeysuckle, but what’s that other one, with the stick beside it?  It didn’t do well this year, so I couldn’t really tell what it was.

Another rose, she tells me.

Hmm.  I’m pretty sure it’s not, but whatever.

As we walk around the Old Kitchen flower garden, she starts commenting on how I’ve taken away the fence, which she has seen before.  What did I plan to do with it (the garden) she asks me.  I reminded her what I’d told her before; I hope to build a small retaining wall and level it off, but for now, I’m building up the soil, and about the layers I’d been putting in.  All of which, I had kept her informed about.

To be honest, I don’t think she actually forgot what I’d told her.  She was fishing for something to criticize!

Then we got around the north side of the house, towards the straw bale.  What’s this? she asks.  It’s what’s left of the straw we got, to layer on the garden and to cover the septic.

She stops.  Turns to look back at the septic tank area we just passed.  She hadn’t noticed that entire corner was covered!

Oh, she says.  We always covered it with flax.

Well, straw was the only thing [the renter] had, I told her.

We continued on and she soon wanted to go back inside.  Through it all, I could see she was trying to find something to criticize me over.  But there was nothing!  Even when she tried to complain about my cutting down “all the spruces” she’d planted along the north side of maple grove, which we could see, because I’d cleaned everything up in there; before I’d done that, you could barely see through at all. I told her, yes, I cut away the dead ones and the dead branches on the ones that are still there (I didn’t bother trying to explain that, of the live ones I did take down, it was because of the overcrowding).  In the end, I actually got a compliment, on how well the insulation was added around the house.  Nothing else.  Just the insulation. 😀

When everyone was arrived and we started dinner, things went very well, for the most part.  My husband had had to lie down, due to the pain, so he missed everyone arriving.  As I went to let him know everyone was here, my mom started yelling for him to come out.  She thought she was being funny, but was really quite rude about it.  When I asked her to stop, she just laughed and said, “it’s a free country!”  *sigh*  Thankfully, my husband sleeps with ear plugs, so he never heard any of it.  He was able to last the entire meal, but that was pushing it, and he had to go lie down again. 😦  A few times, my mom tried to bring up unpleasant topics, which we were able to distract away from.  Then she started to bring out some horrific printouts of atrocities she carries in her purse.  I asked her not to, but she wouldn’t stop, so I just moved to another seat, away from her.  My daughters decided that was a really good time to go check on the cats.  She actually put the printouts away and changed the subject, so that was good.  Later, as we were leaving, my mother actually complimented on how good everything tasted, which was a nice surprise!  I honestly can’t remember her ever truly complimenting my cooking before.  Usually, she’s surprised I know how to cook at all. 😀

All in all, it was a really good, belated Thanksgiving dinner with the family!  It’s been ages since we’ve all been together like this.  Though I don’t know that we’ll have the energy to do it again, any time soon! 😀  We are NOT social people, at all.  😀